Over the years I created several posts about ham …

Now we are approaching Xmas season – so I thought that some sort of roundup might be quite a good idea, because a delicious big chunk of ham is appropriate for any winter get-together if before Xmas, during Xmas or after Xmas.

In general the process to create a ham dinner is always the same – so I’ll present 2 different results … one is based on a recipe of Nigella Lawson, the other on a recipe of Lorraine Pascale (the books are linked to my cookbooks).

We need a big pot to cook the ham.

We fill the pot w/ the ham, the liquid & all the other ingredients for the cooking session and bring to a boil. Afterwards we let it simmer, lid closed, for about 90 – 120 min, depending on the size of the ham.

Finally let’s rescue the ham & cut off the skin (or crust) – carefully! A layer of fat, about 5 mm, has to remain. Slice the layer crosswise (like a diamond shape!) & pin cloves into the crossings.

What to do w/ the liquid?
Rescue it & store for further use as a basis for a sauce or a soup.

Nigella mixes honey & mustard. (Instead of honey you may also use sugar beet syrup …)

The ham will always be covered generously w/ the glacing. The glacing is sticky – it’s necessary to get a sticky glacing. Best is to put the ham on a baking tray or in a big casserole before applying the glacing. The ham may rest for some hours or until the next day. (Don’t put it in the fridge!)

Then there is the oven session …

Once I made a ham & served it together w/ beans & more vegetables. I remember having created a sauce out of the cooking liquid. 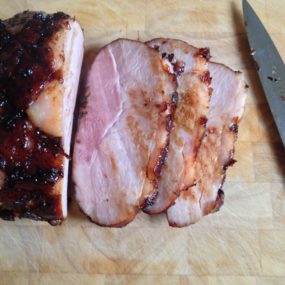