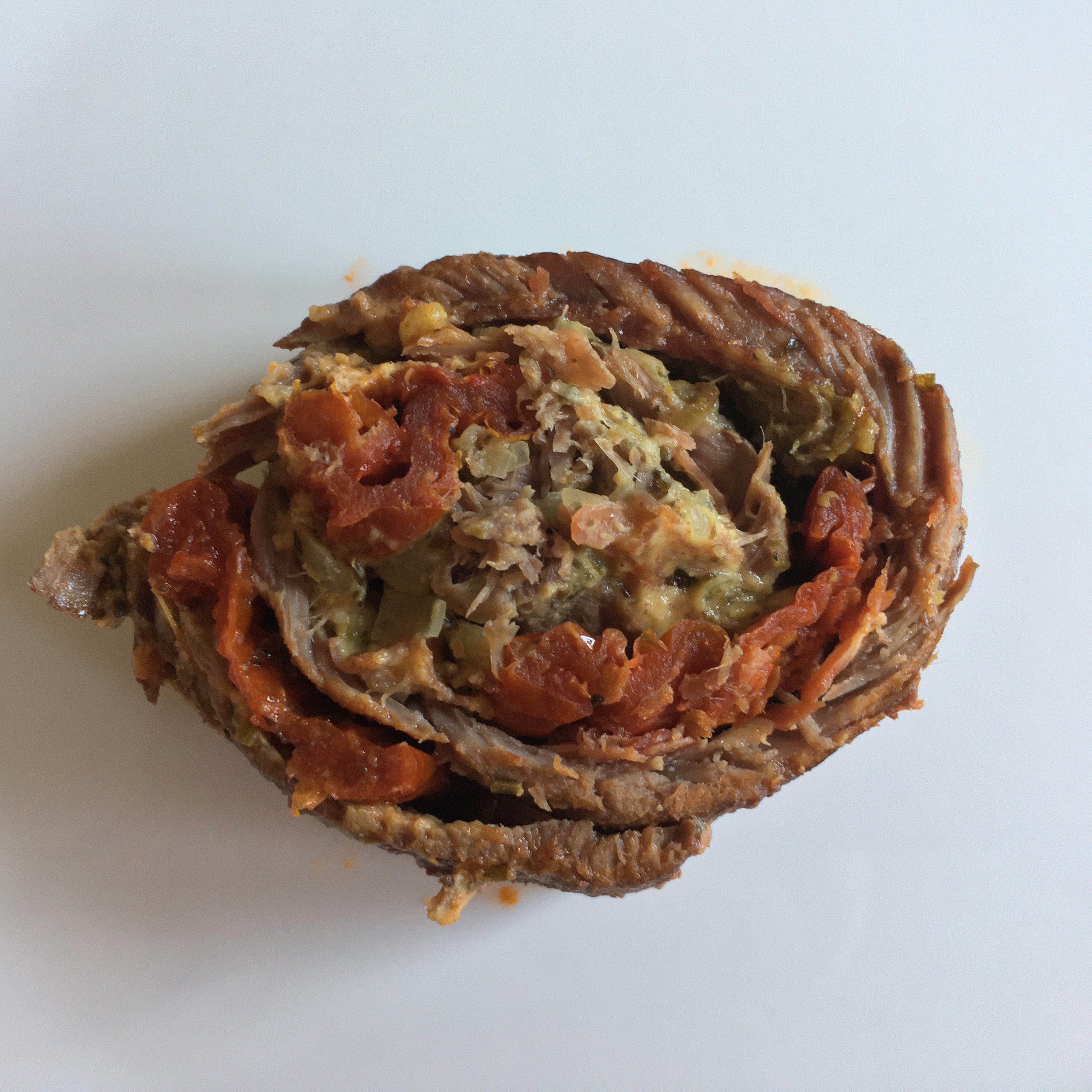 It’s summer time. All people think about BBQ dreaming of perfect sausages & steaks – or whatever. Also substantial or less substantials salads are in vogue. Nobody thinks about a roast … in a kitchen … needing long hours …

However, I bought a beef package (100% organic) processed from happy cows somewhere in Bavaria weeks ago. All portions went straight in our freezer. Amongst others there were beef roulades which hang around since then. So I decided to do roulades for the weekend … no classic German style roulades, but w/ a Mediterranean touch.

The most delicious part of roulades is the filling. I’m sure nobody will disagree. So the filling has to combine the Mediterranean flavors – I imagined.

At 1st I scanned my kitchen drawers for my roulade pins because w/o pins there wouldn’t be any roulades. (I’ll have to admit that I’m always short in butcher’s string … when trying to stock up it seems always sold out.)

For the record:
I’ve got more than 4 pins. However, I planned to do 2 roulades & I need 2 pins per roulade. 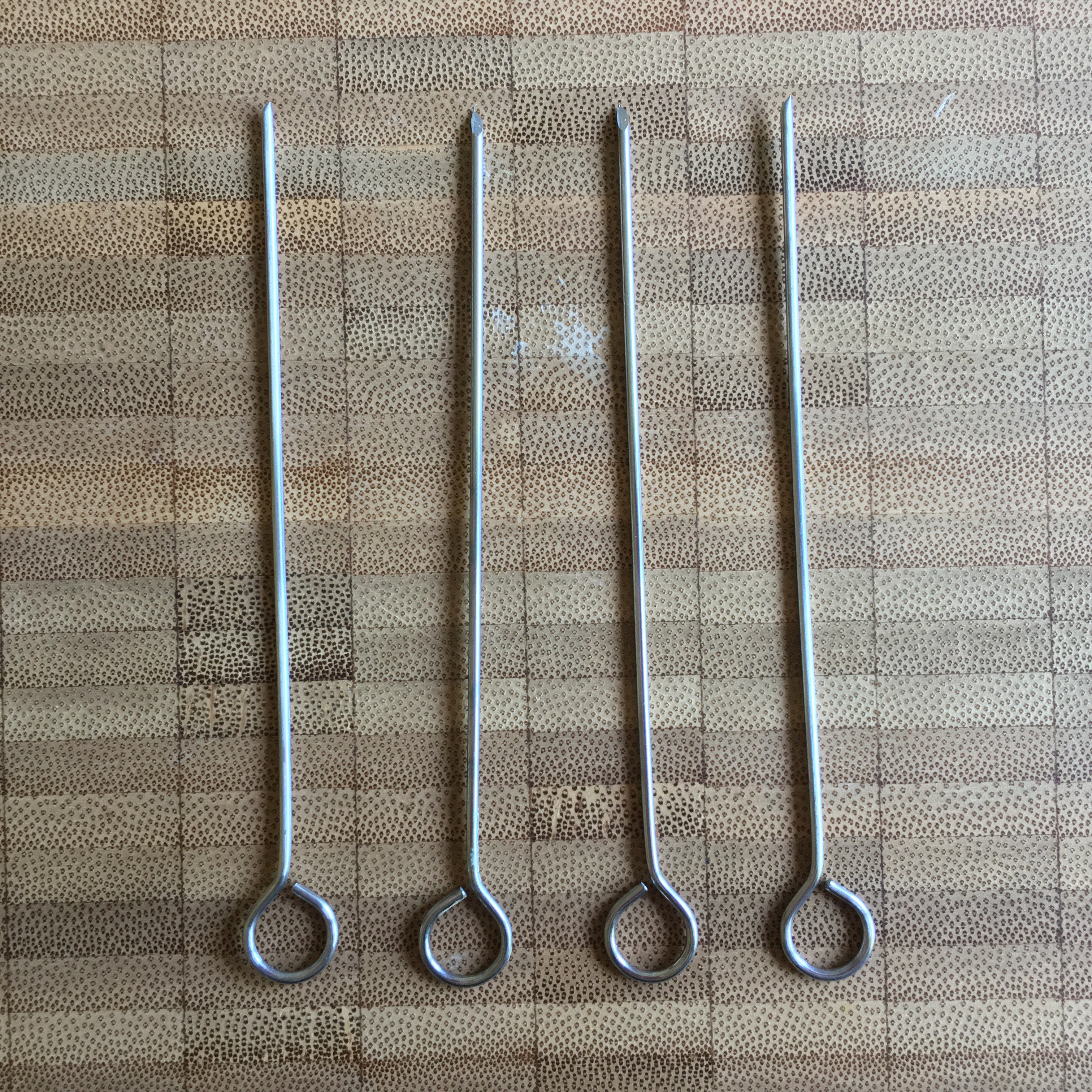 I thought about the Mediterranean touch – how to create it …
So the next step: are there any ingredients I’d need which aren’t available in my pantry or fridge? I didn’t find any roadblock!

What do we need for the roulades – i. e. the filling? 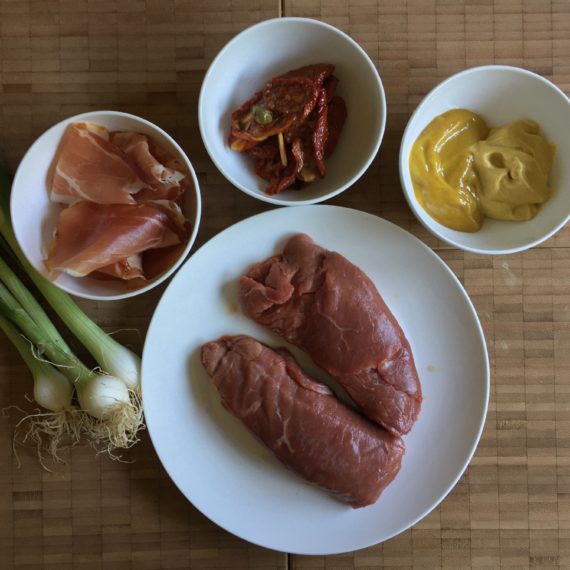 It’s not so sophisticated: 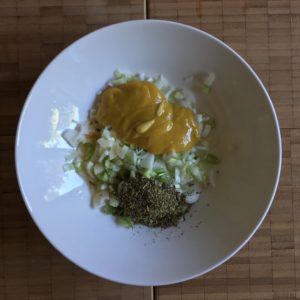 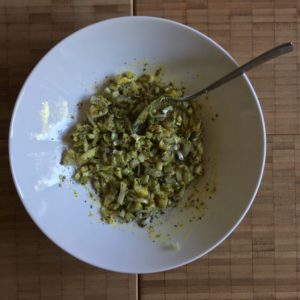 When rolling out the beef roulades I noticed that they were not equal in size. That’s life!

I distributed the Dijon mustard evenly all over the roulades. On top the thinly sliced bacon – you need not chopping the bacon!

I placed some dried tomatoes w/o squeezing all the olive oil & filled it up generously w/ the spring onion mess. 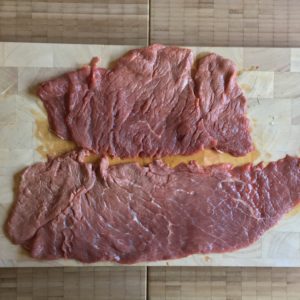 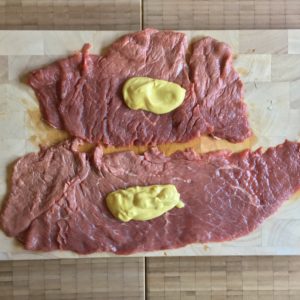 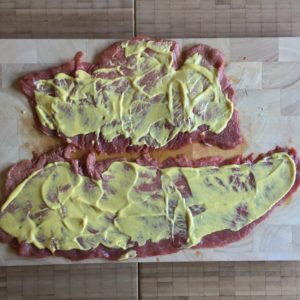 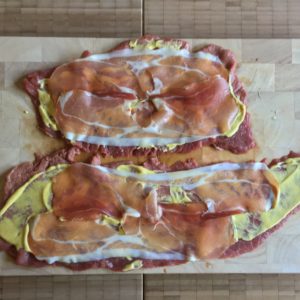 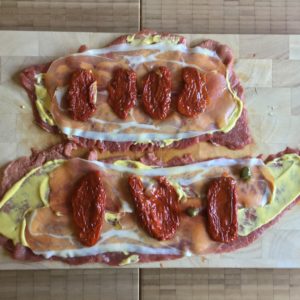 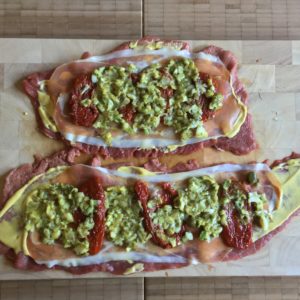 Now the crucial part of the preparation starts: forming the roulade & fixing it.

The filling is delicious, but resist to overdoing. The roulades will be rolled up – it’s ok if some filling spills, but only a little bit. The roulades shall be compact & happy to be fixed w/ 2 pins. Too much filling … no! 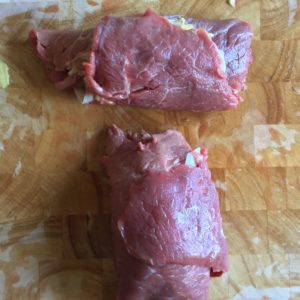 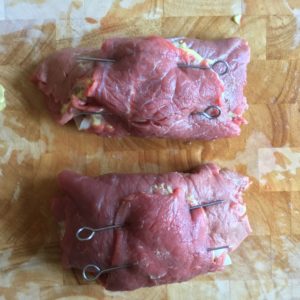 In a frying pan w/ some olive oil I started frying the roulades from all sides until nicely brown. This will take about 15 min. 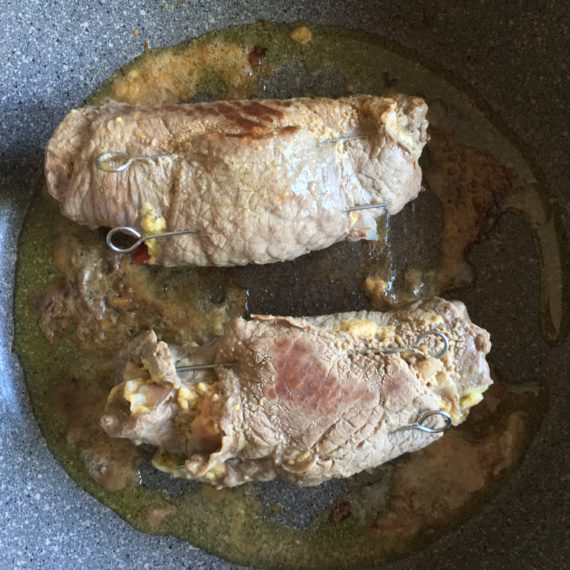 In the meantime we’ll prepare the starter set for the sauce.

For the record:
When stating that the filling of roulades is the most delicious part of the whole roast affair … well never underestimate the sauce of roulades!

Chop roughly the vegetables & the garlic. 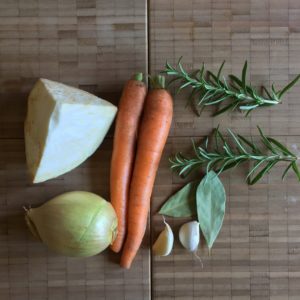 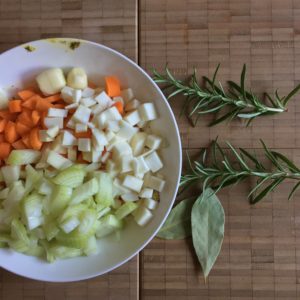 Take the nicely brown roulades out of the frying pan, set aside & dump the vegetables & the herbs into the pan. Add salt & pepper. Start frying for about 10-15 min.
Careful: the vegetables shall not get burnt! 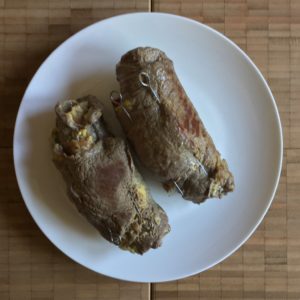 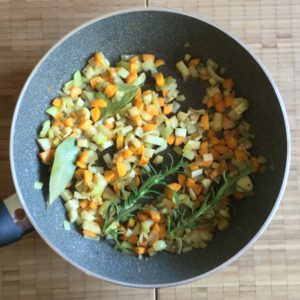 For the sauce we also have to add: 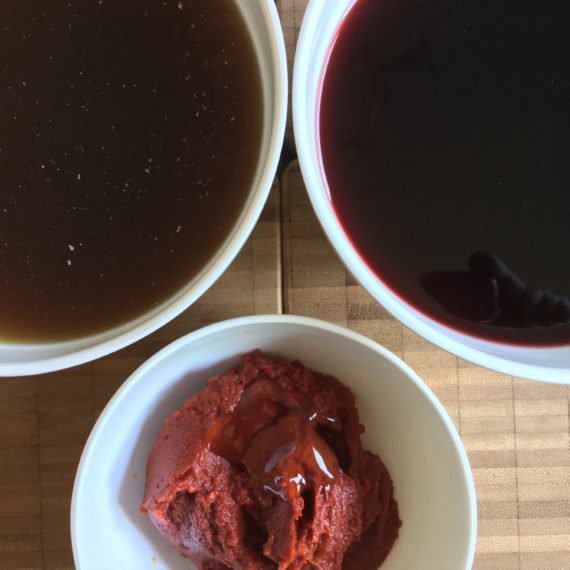 Pour everything into the frying pan w/ the vegetables & mix well. Bring it to a boil – then dump the roulades in the liquid. 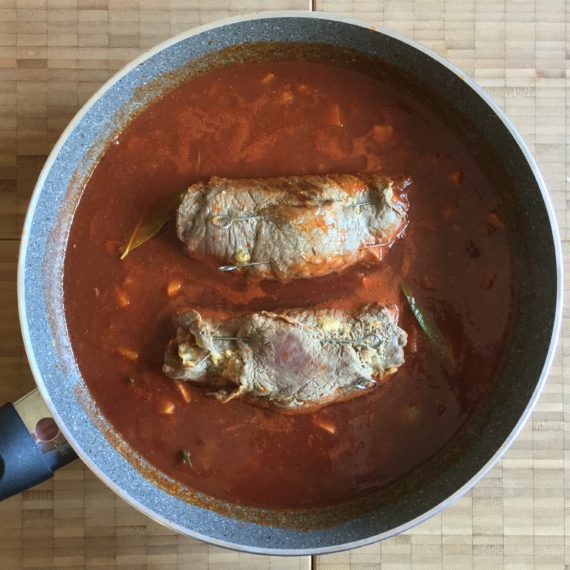 Now we are almost finished!

Put a fitting lid on the frying pan & reduce the heat – enough heat for a gentle simmering of the liquid. 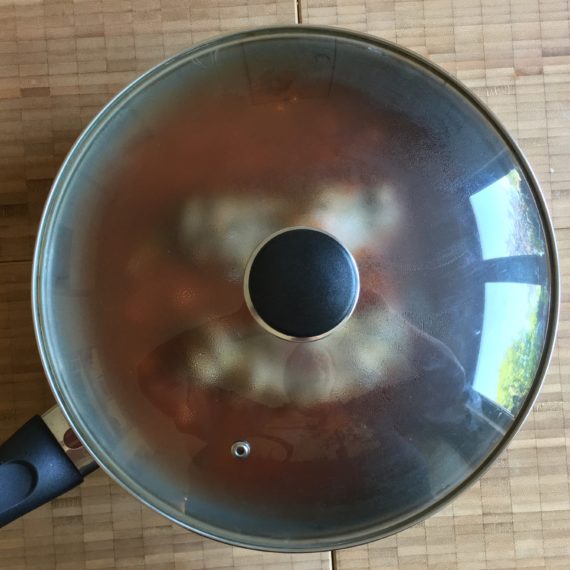 The roulades are ready when they are soft. Make the famous test w/ a wooden pin … The pin shall go smoothly into the roulade! 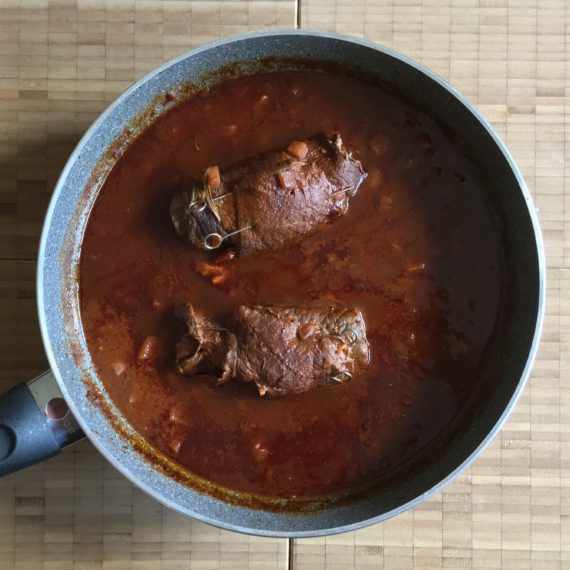 Save the roulades on a plate. 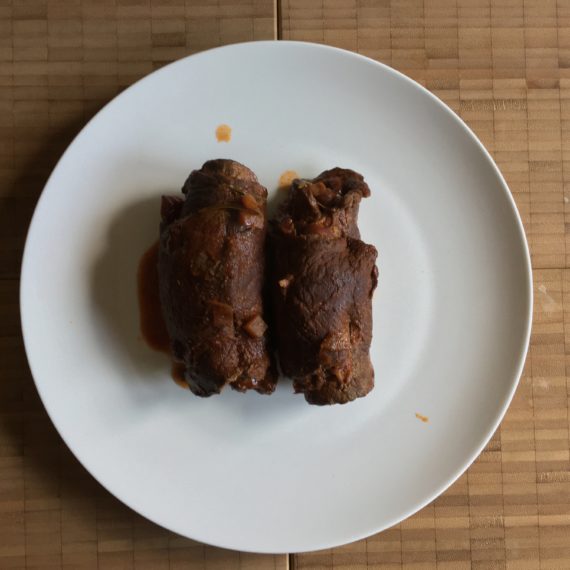 Discard the bay leaves & the rosemary …

… & grab your handheld electric blender … (If your frying pan is as low as mine: Pour the mess into a small pot beforehand!)

After the blending session there is a fine smooth sauce which doesn’t need any thickening actions. Only: add some salt & pepper to taste. 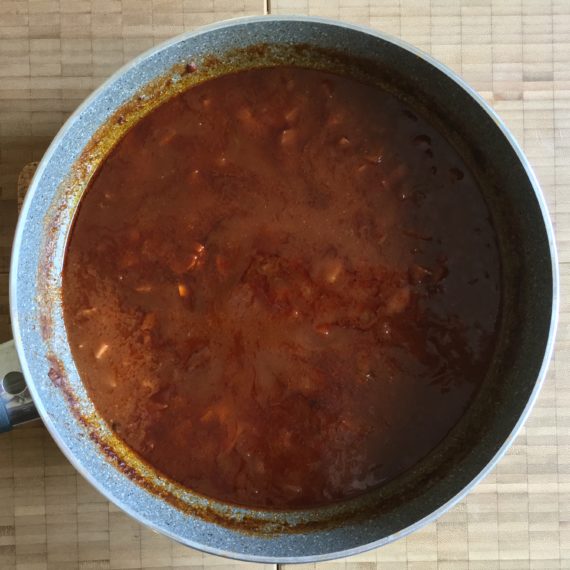 … & the roulades: soft & crumbly, full of flavor, juicy, a little garlicky … you smell the tomatoes, the rosemary, the red wine … you experience the south!

My better half & I simply cooked some pasta & made a deep dive into the mix of roulade, sauce & pasta. 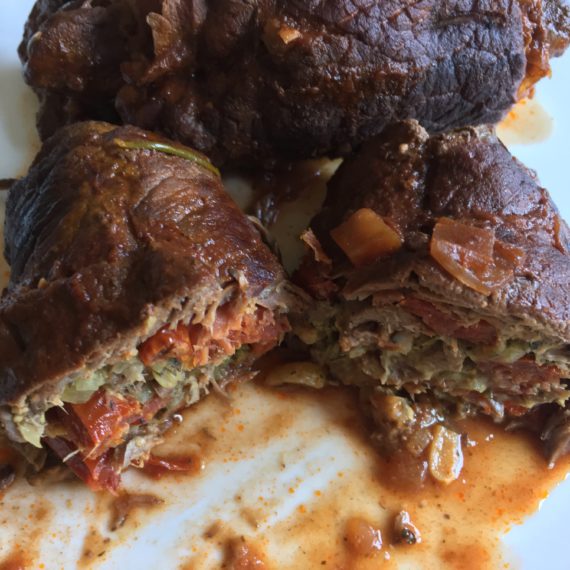 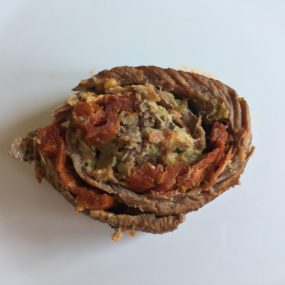 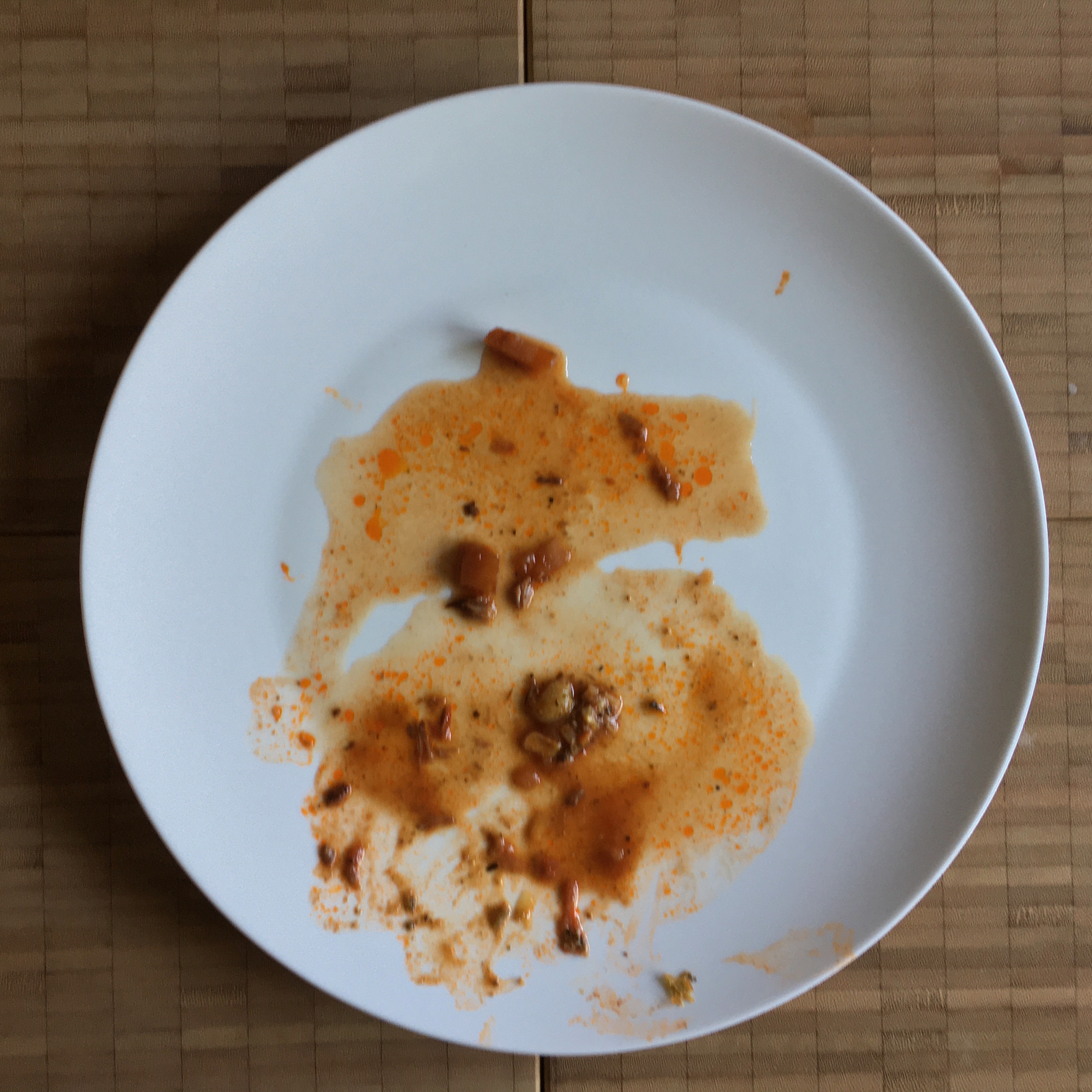