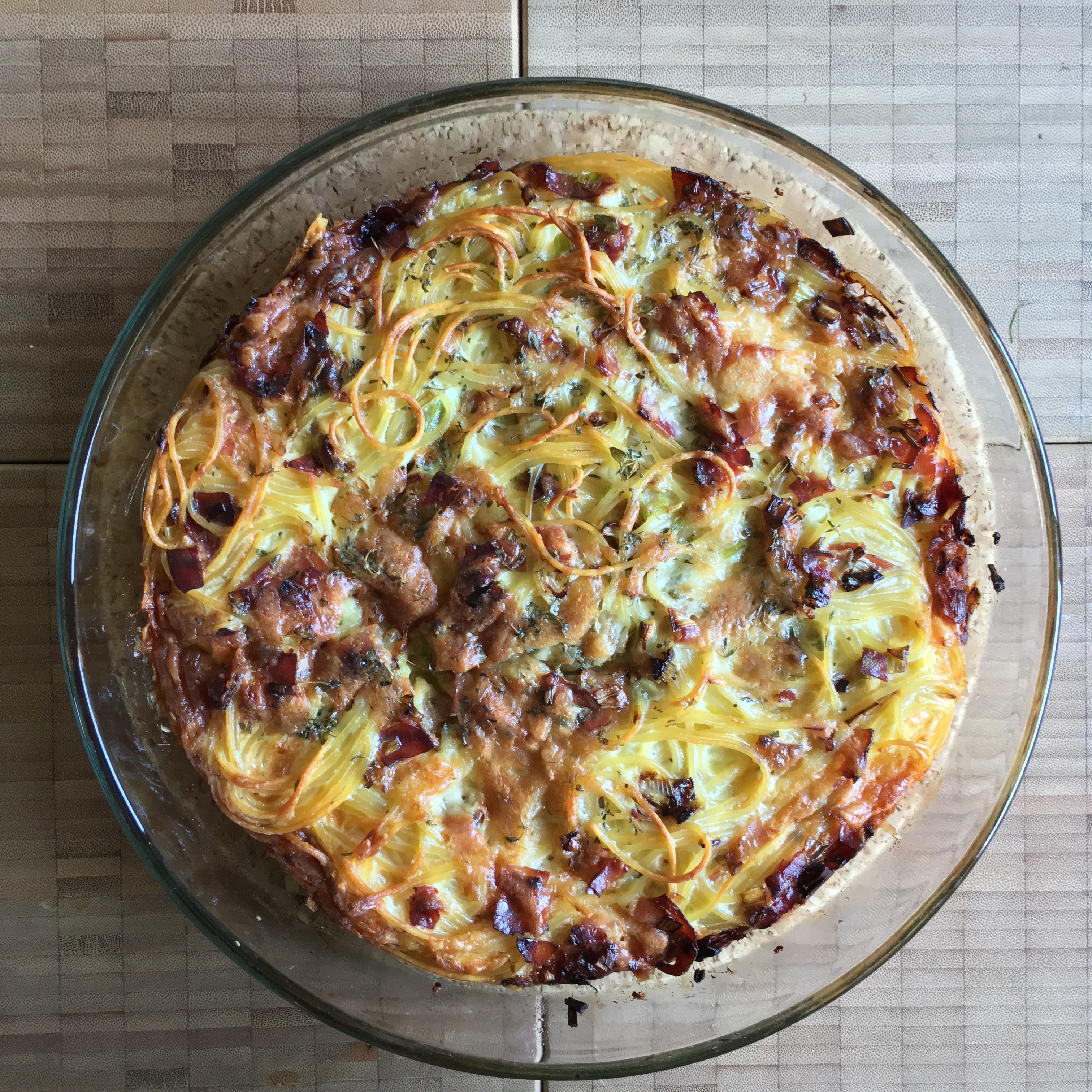 Every now & then I stumble across a recipe about a spaghetti tart or bake or … What I mean is a dish – served warm as well as cold – where cooked spaghetti are mixed with meat or vegetables or cheese or whatever & become covered by a mix of cream & eggs ready for a session in the oven. The result is some sort of quiche/tart/frittata/… which may be cut into slices like a cake. 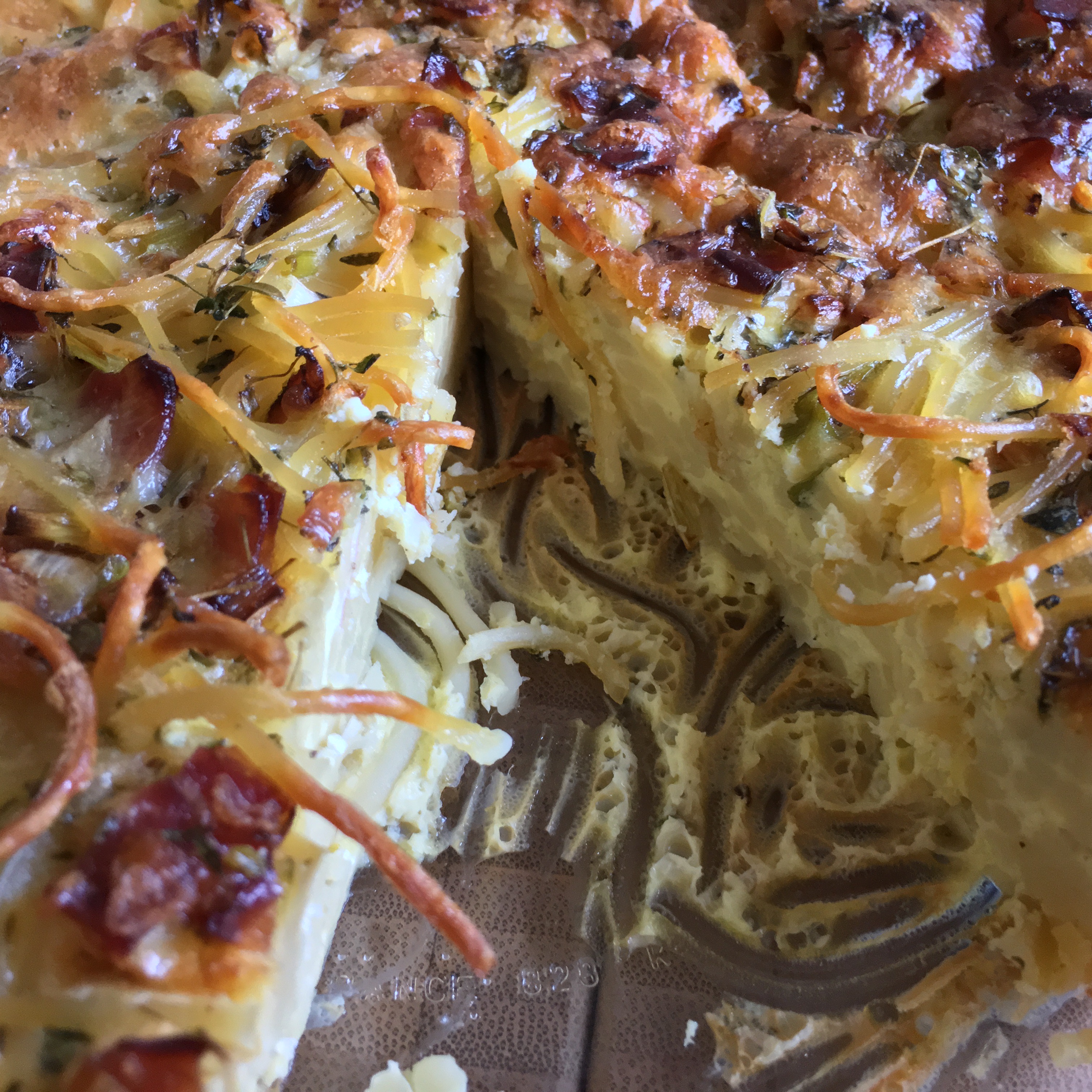 I thought time has come to give it a try.

Obviously at the end we’ll have a rather big result feeding more than only my better half & me. So I hoped that it might be possible to store it in the fridge or even in the freezer. (Yes: it’s fine in the fridge – alas it never made it into the freezer…)

Furthermore I had to decide which way to go…
We are generally always on our way w/ quiche, tart, frittata… In a certain way it’s always the same procedure:

For this planned spaghetti affair I thought of something like a sort of quiche. 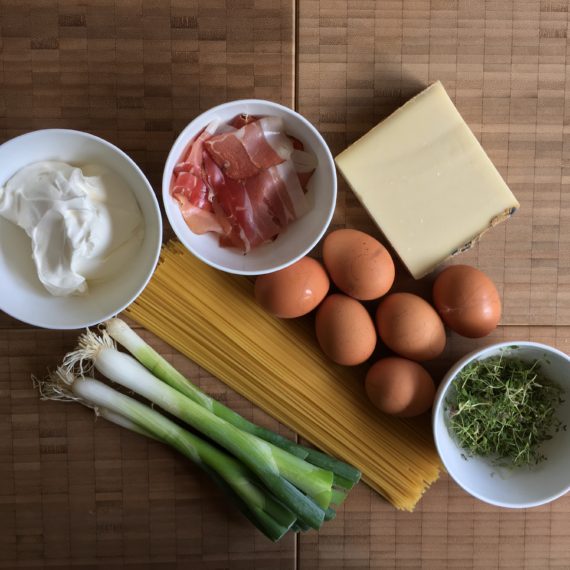 …in the style of quiche:

Let’s start w/ grating the cheese; it’s real Gruyère. Then the bacon (South-Tyrolean bacon it is) & the spring onions will be finely chopped. 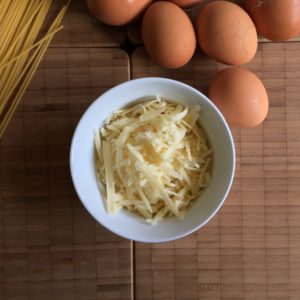 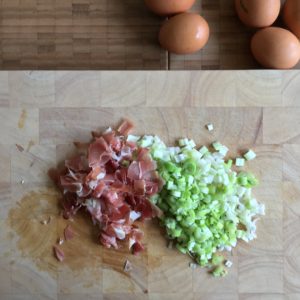 In the meantime the spaghetti should be cooking – stop as soon as they are very al dente. Then drain them & rinse w/ cold water. Get a casserole ready & arrange the spaghetti on the bottom – as evenly as possible.

Fry the spring onions & the bacon in some olive oil. Distribute evenly over the spaghetti. 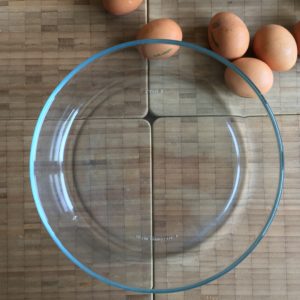 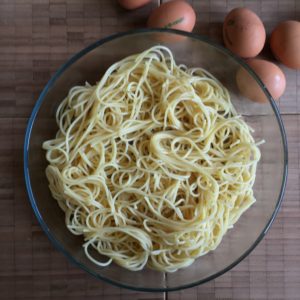 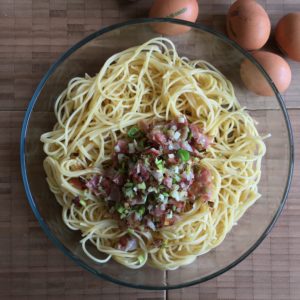 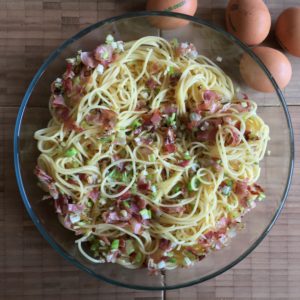 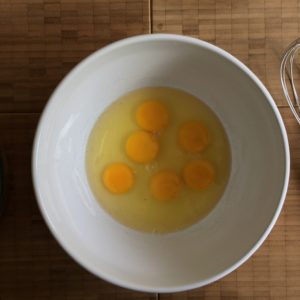 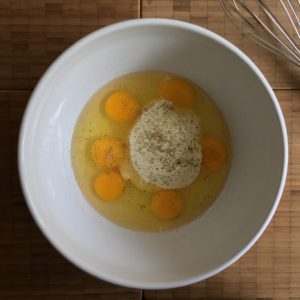 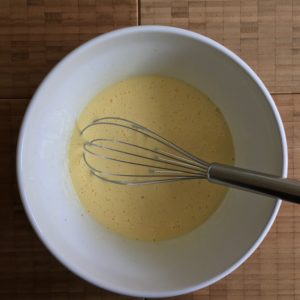 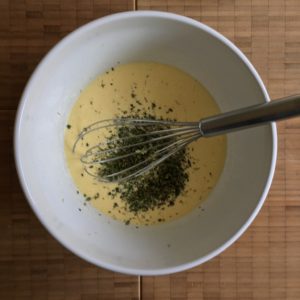 Sprinkle the gruyère all over the spaghetti. Then pour the egg mix on top. It’s quite useful to press the mess down – a little to make sure that the egg mix distributes all over the casserole. 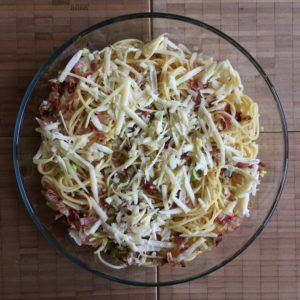 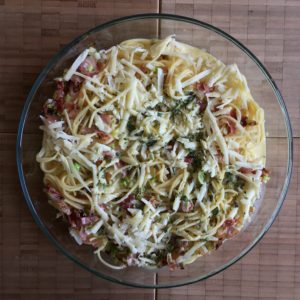 Put the casserole in the preheated oven for about 40 min until the spaghetti get crunchy & the egg mix is stiff. 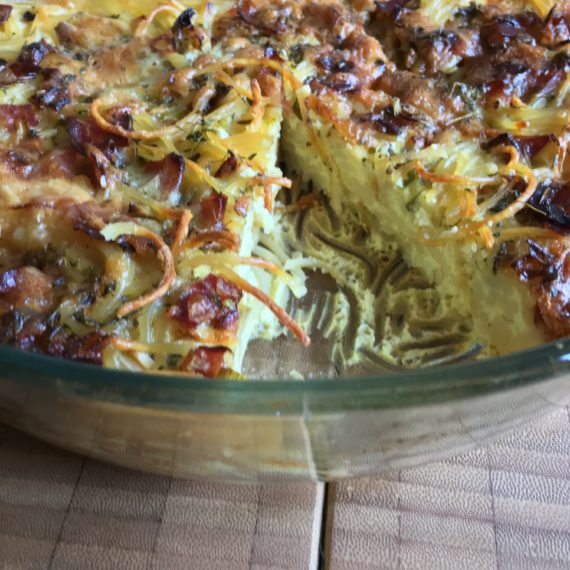 Print
Yum
spaghetti quiche or what...

Stack a thick layer of cooked spaghetti, top with crisp bacon and spring onions, add shredded gruyère... and finally pour a mix of eggs and crème fraîche over the mess: you’ll get a spaghetti quiche - or what do you think?

Spaghetti: you may reduce the amount of spaghetti to 150 g.

Spring onions: you may substitute white or yellow or even red onions for the spring onions. A medium onion will be ok.

South-Tyrolean bacon: you may also use pancetta or any other bacon w/ strong flavour.

Thyme: you may substitute fresh oregano or fresh basil for fresh thyme. You may even rely on dried herbs if fresh herbs aren’t available.

The spaghetti are slightly covered by the egg mix. If you like more... just add another 50-100 g crème fraîche.

At first the top of the quiche seems to be rather crunchy, but it gets softer when resting properly covered.

You can put it in the fridge for at least 3 days.

It’s a rich spaghetti quiche which will make up to 12 slices (or even more!).

The spaghetti – inside – are soft & smooth. The main flavour comes from the cheese & the bacon as well as the thyme. Seen overall it’s a very delicate flavour. 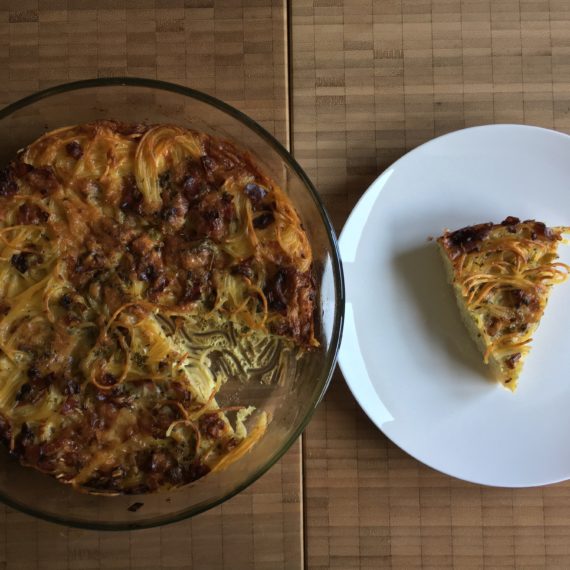 When leaving the oven & after some cooling the spaghetti will be really crunchy. 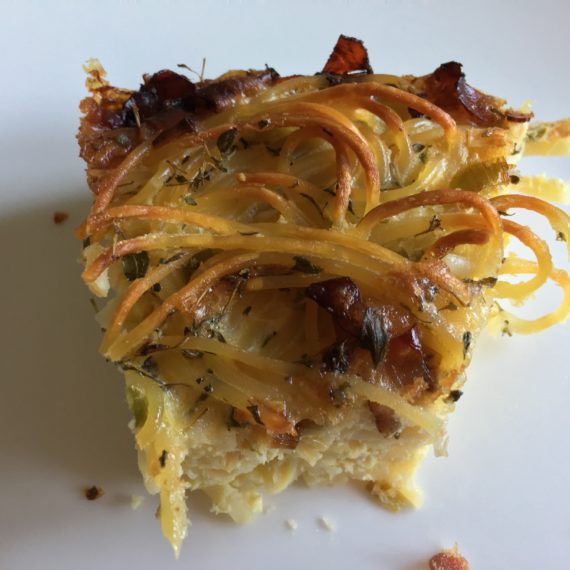 Some hours later – when cooled down & covered for storing – the crispiness will vanish: especially after a day in the fridge the top layer will get as soft as the rest.

You may serve the spaghetti quiche hot (out of the oven) w/ some mixed green salad, warm (i. e. reheated in the microwave) for dinner or so… or just cold. It’s fine when it’s cold: it’s not greasy! 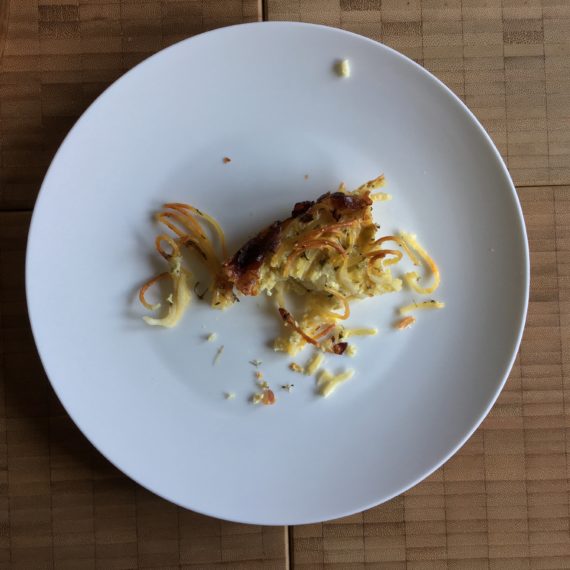 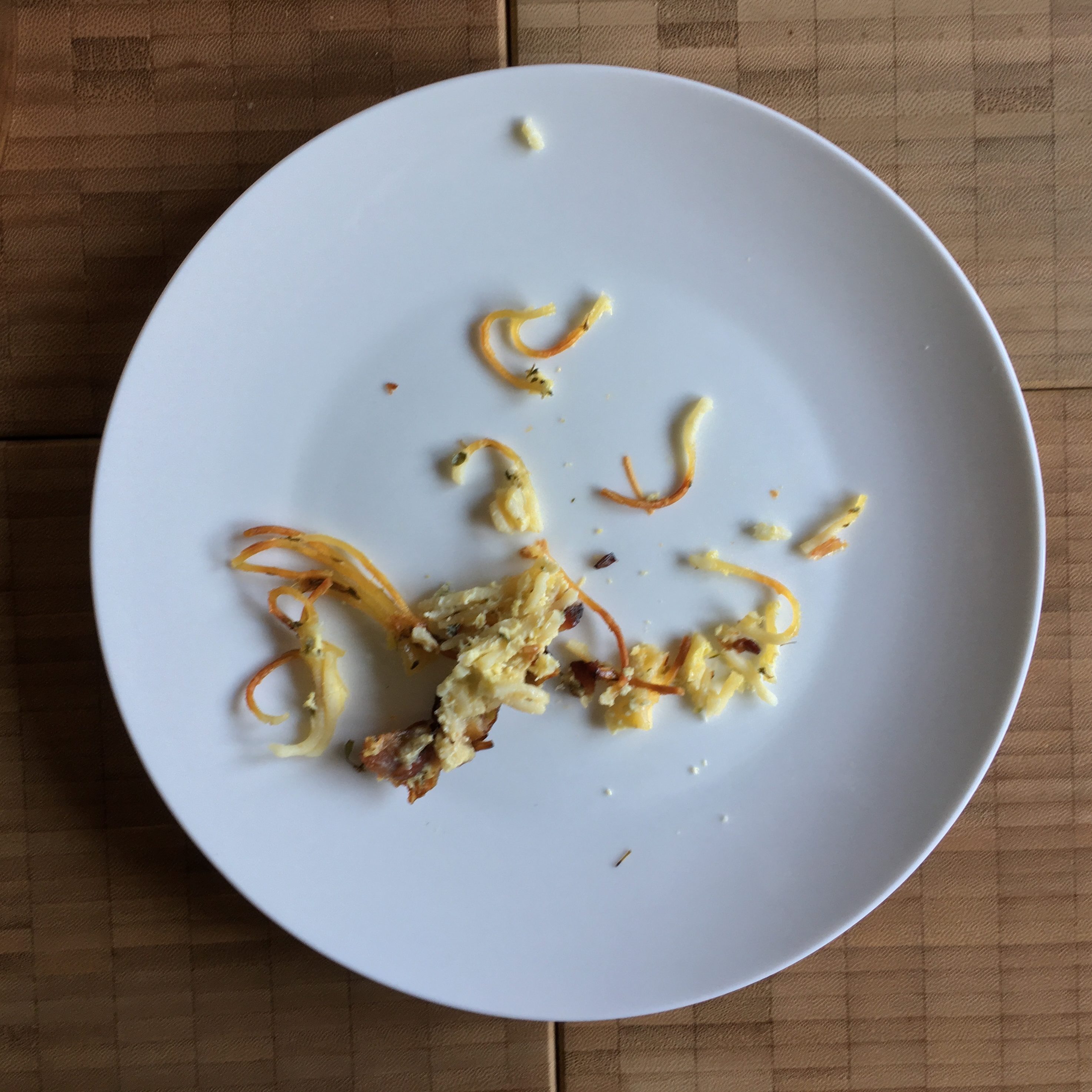