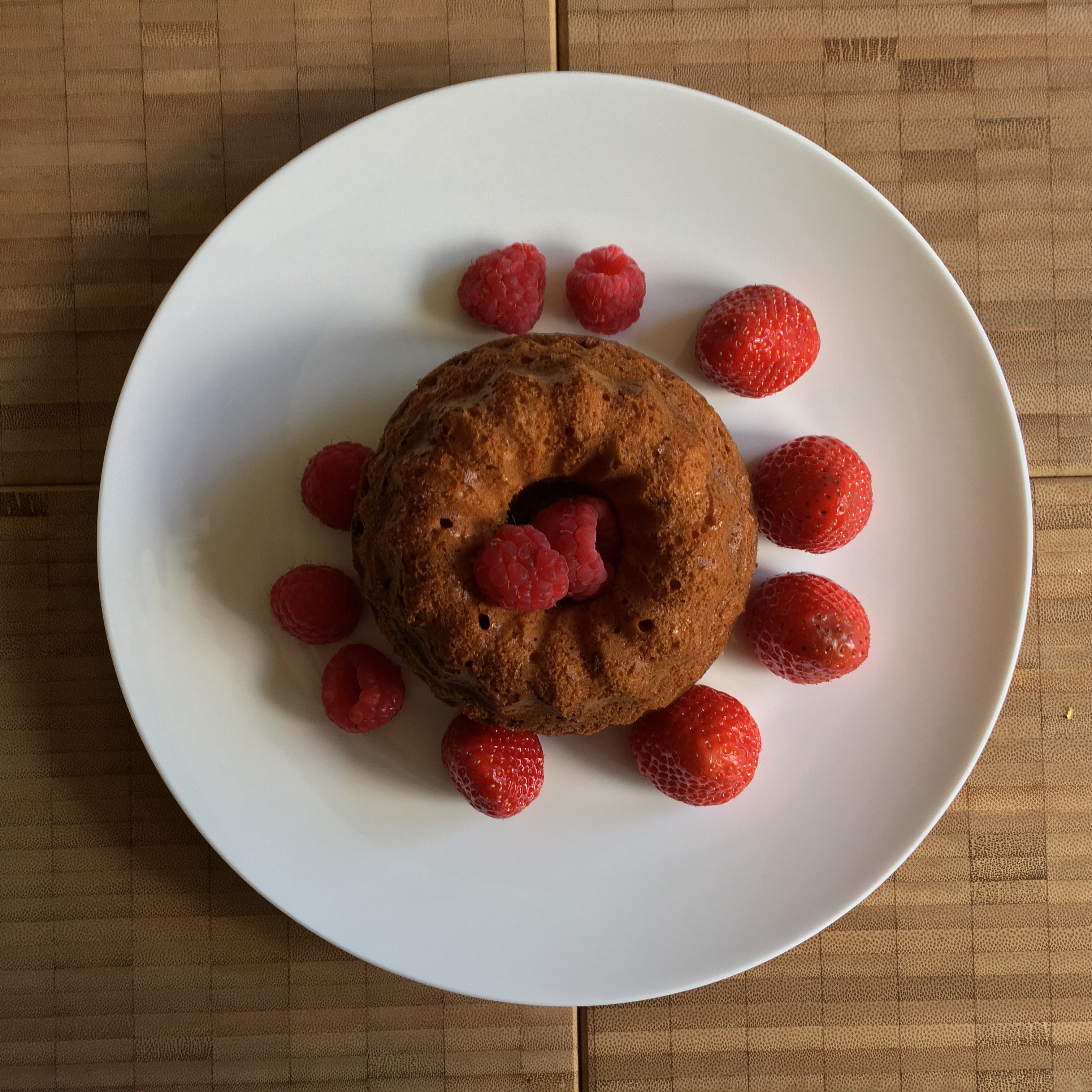 We – my better half & I – do. We liked binge watching as soon as TV series appeared via DVD boxes & more than ever as soon as streaming became a commodity. During Corona times when everything (aka cinema, theaters, concert halls …) is closed streaming & binge watching is manifest.

For the record:
I always was annoyed when there was a TV series, especially a continuous story, which was broadcasted only once a week. Waiting for a whole long week until you learn what happens … can be excruciating!

During the last weeks a series called “Little Fires Everywhere” appeared. At 1st I was a little … hmmm – because I read the novel about 2 years ago … (So I was aware of the story.) However, we started watching & watched some episodes each night.

On the one hand I noticed that the TV series was near to the novel – fine. I like it. Then I noticed that Reese W. was the perfect incarnation of the good housewife w/ 4 children, the rich one, the caring one, the social active one …  scheming whenever necessary (from her point of view) … who only wants the best, but creates havoc. (Best jokes were her Xmas activities she planned & organized involving her family – if willing or not.) Her mini-me is awesome.

On the other hand there is the artist on the run who makes her daughter’s life a misery – unintentionally. (Well, this was for me somewhat … because I remembered the novel & the solution of her secret.)

In short: It’s the duel of mothers about motherhood.

While enjoying the series for some successive nights we also enjoyed some cake. We always have an espresso later after dinner w/ something sweet or chocolaty. I made some little Bundt cakes ready for a dollop of Greek yoghurt & some fresh raspberries & strawberries to go with.

For the record:
A cake is ok for 2 people w/ an espresso.
For afternoon coffee make it 1:1 i. e. 1 Bundt cake per person. 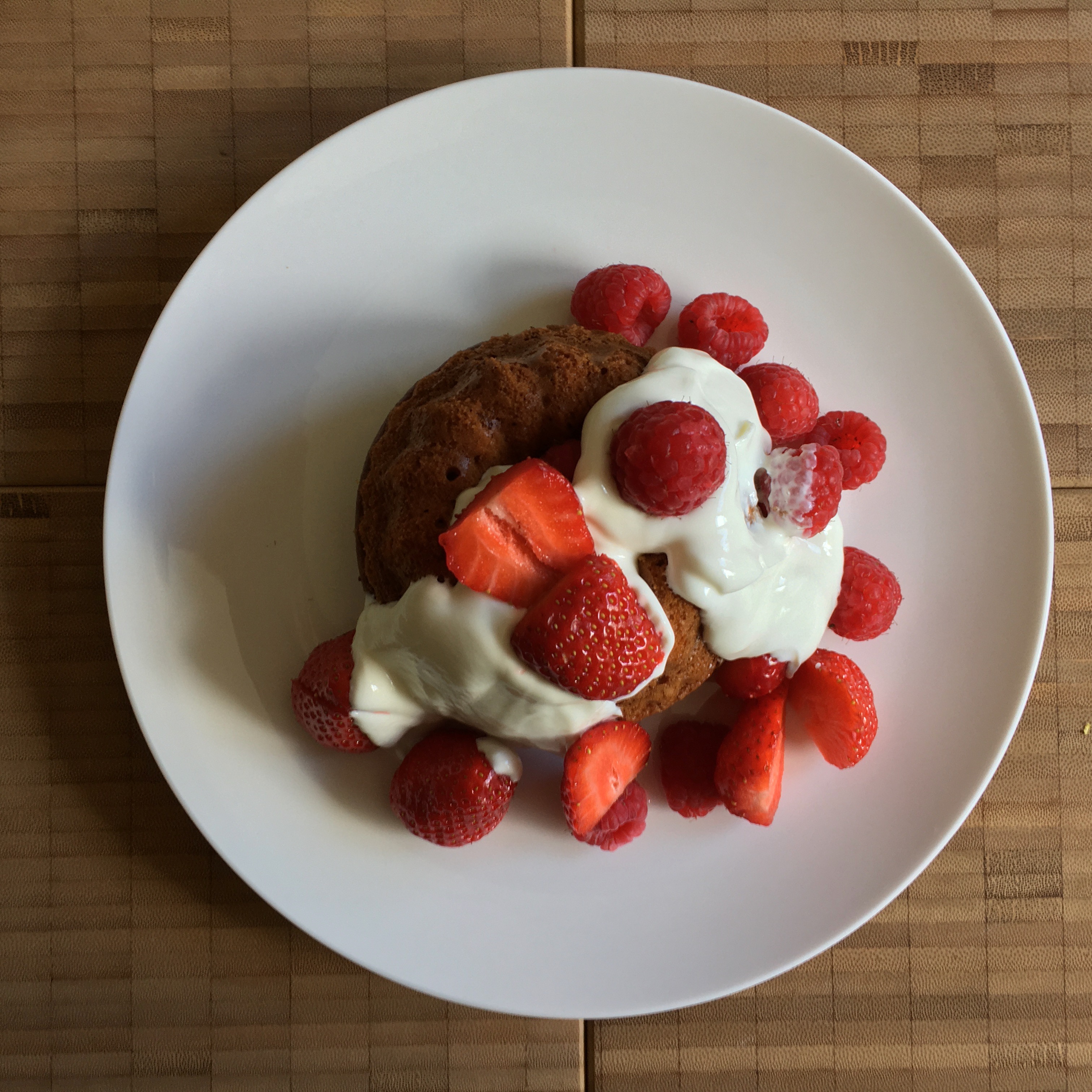 For the cakes I got my inspiration from a recipe for a lemon cake on  Zimtkeks und Apfeltarte … & the simple fact that I own a cake tin for little Bundt cakes which I use by far not often enough. 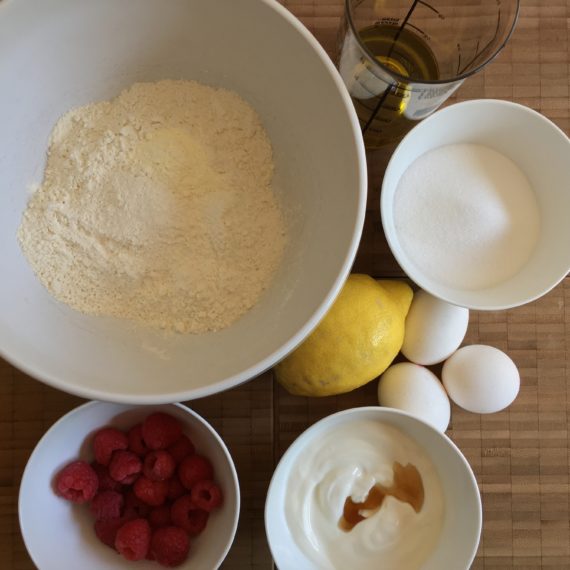 … & my cake tin for 6 little Bundt cakes (which gets oiled before using)! 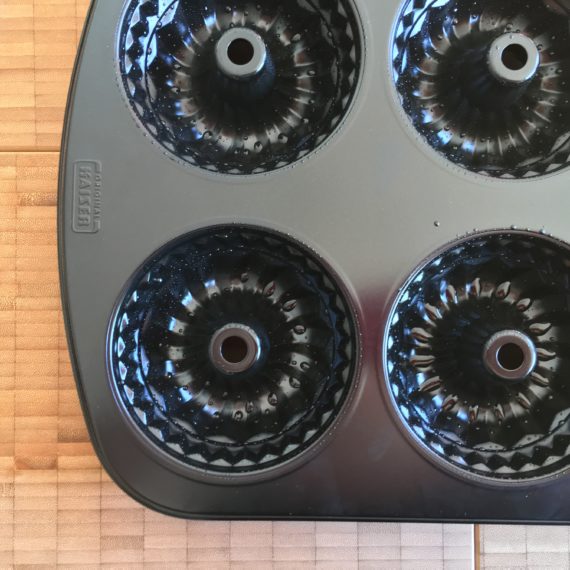 Afterwards it’s time to grate the zest of our organic lemon. 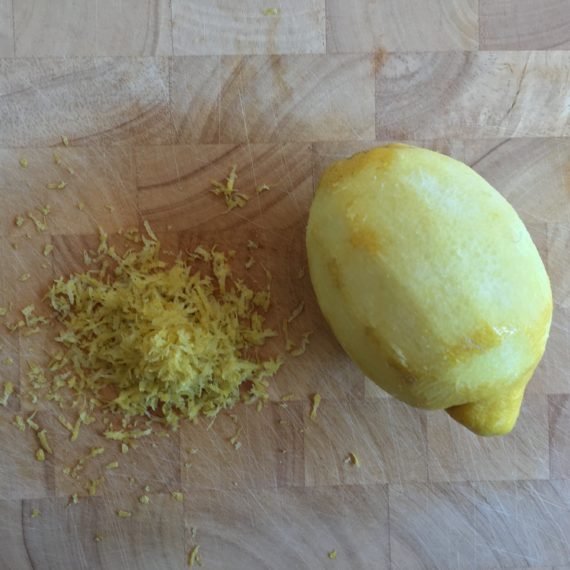 Clean the raspberries & mash them – not too much. 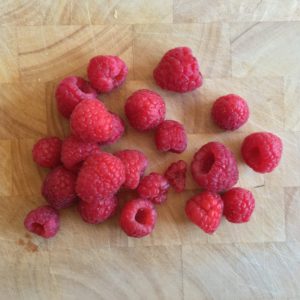 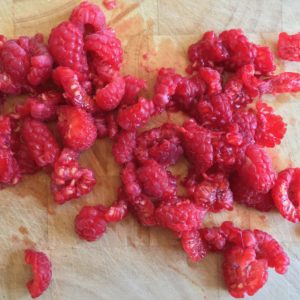 W/ your handheld electric mixer whisk the eggs, the sugar & the olive oil. Add the mess to the flour mix & mix.

Finally fold in  the mashed raspberries w/ help of a spoon. 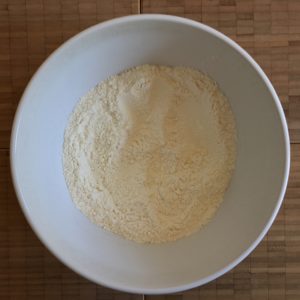 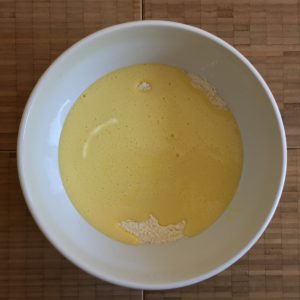 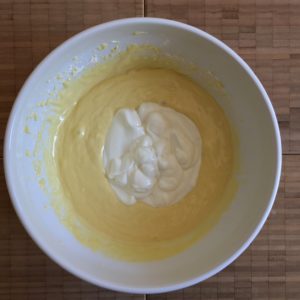 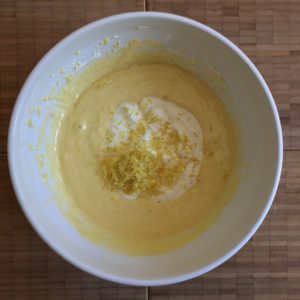 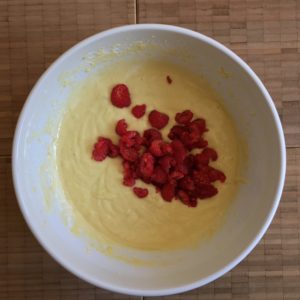 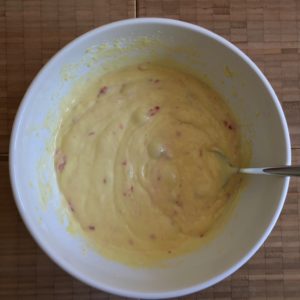 Now be careful when filling the mess into the cake tin. There are always some splatters – remove them before the cake tin marches into the preheated oven. 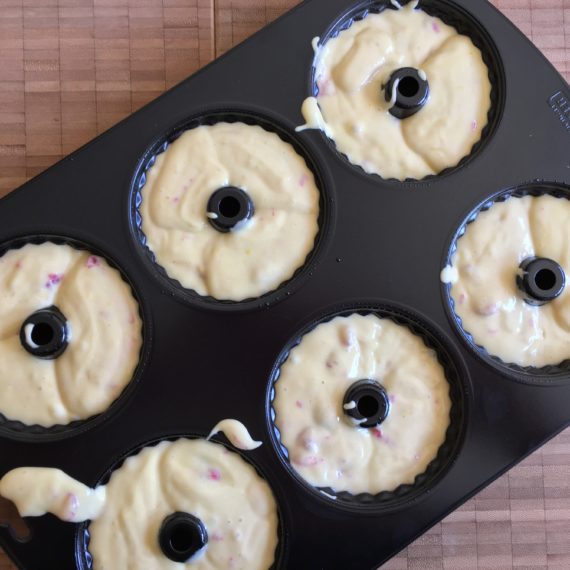 The Bundt cake holes were filled up to the rim – maybe a little too much. However, the cakes were fine. (Some dough ended up onto the bottom of my oven – not worth mentioning.) 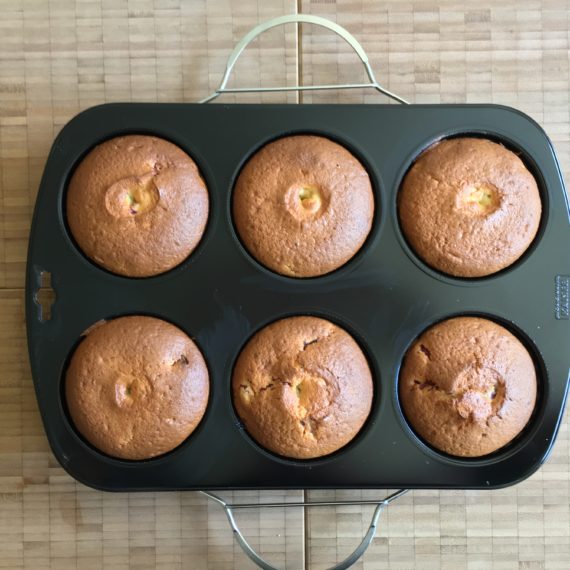 After the oven session let the cakes cool down for 10-15 min. Then tip over & the cakes will tumble out.

Let them cool down completely. 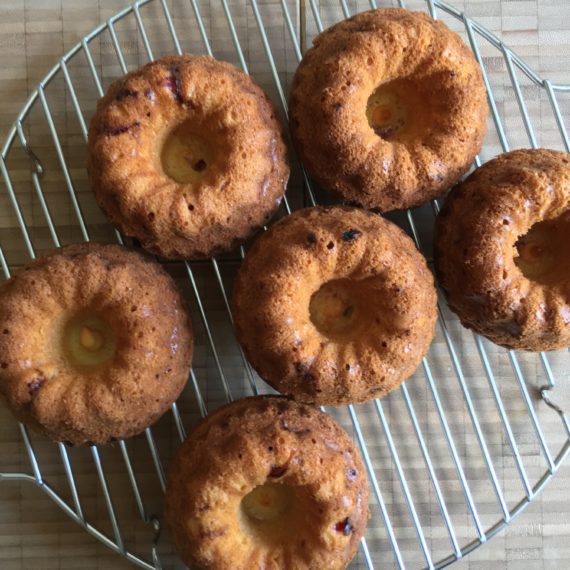 For serving just add some Greek yoghurt & lots of fresh raspberries and/or strawberries. (You may also add whipped cream instead of Greek yoghurt.) 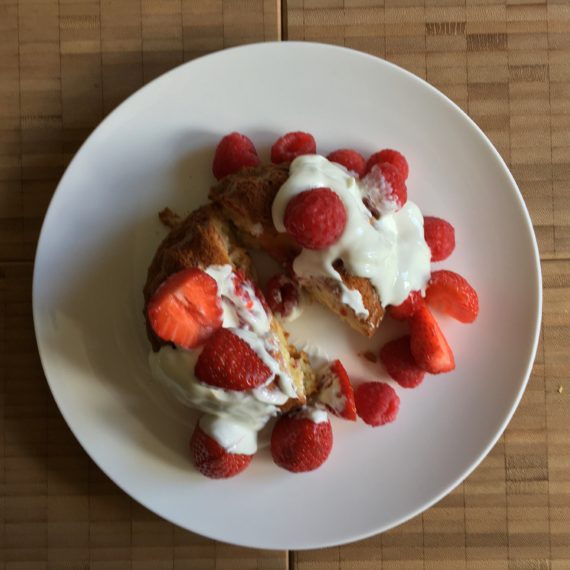 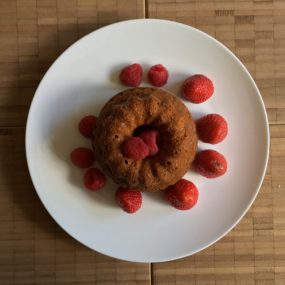 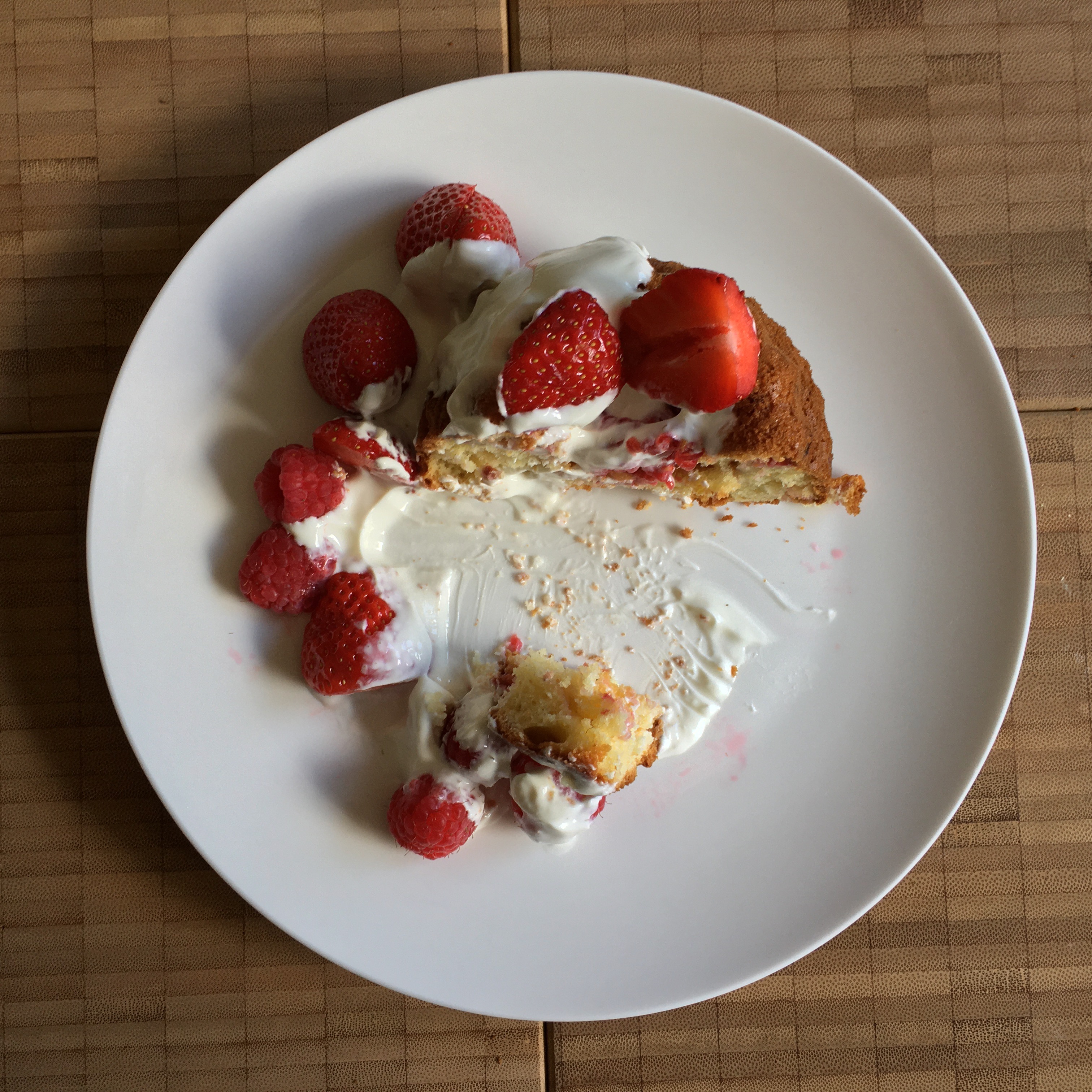