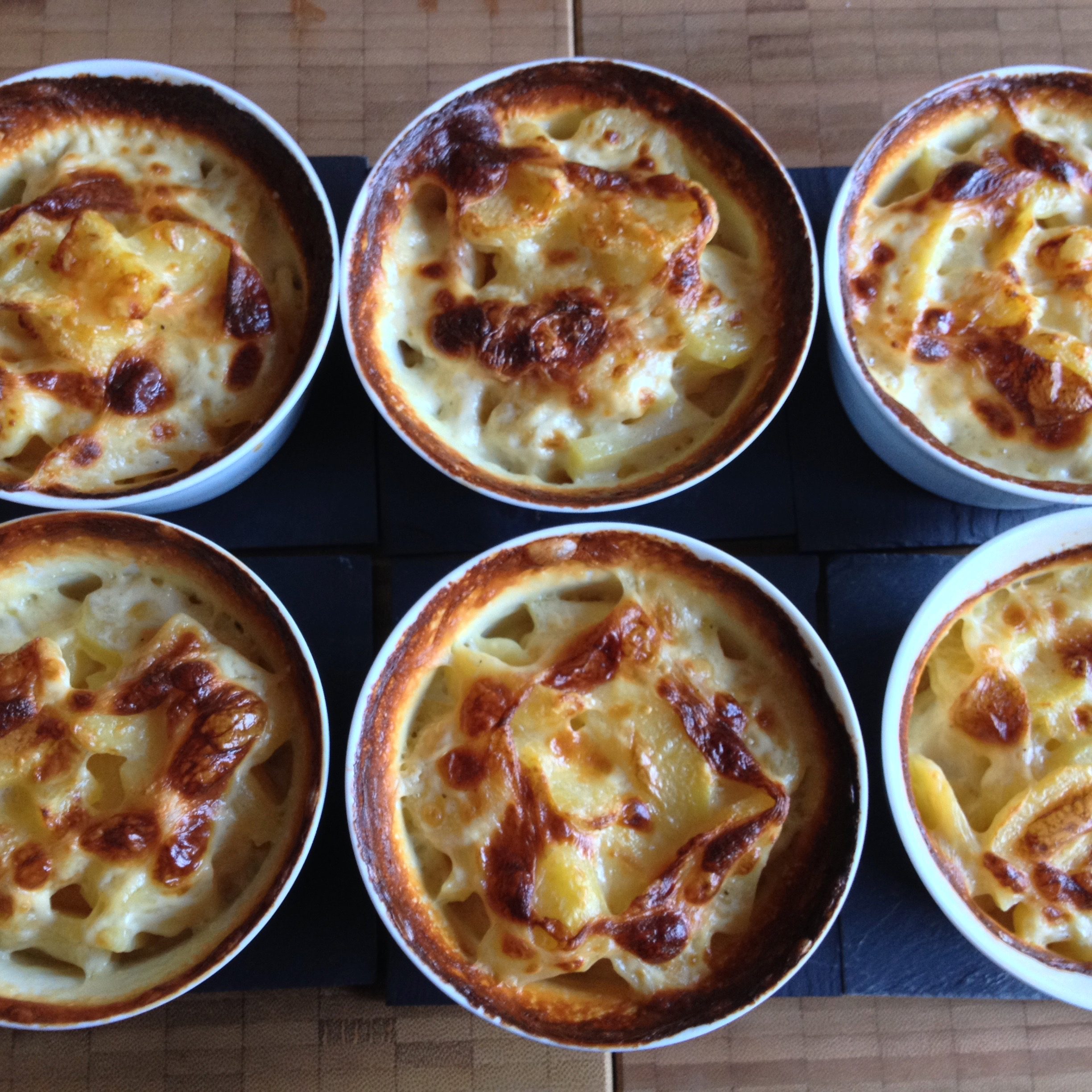 Le Dauphin” used to be the title of the heir to the French throne for centuries… while “dauphinois” is related to the French region “Dauphiné” where this side dish originates. “Dauphin” is French for dolphin – a dolphin is part of the coat of arms of the heir to the French throne: in the 12th century the count of Albon was nicknamed “Le Dauphin” (which was passed on to his successors) & his county was renamed “Dauphiné”. 200 years later the county became part of France & was given to the heir of the French throne… (something alike the “Prince of Wales” business). The side dish was mentioned on July 12th, 1788 for the 1st time… (Thank you Wikipedia!) I used this background to label it “Royal Potatoes“! 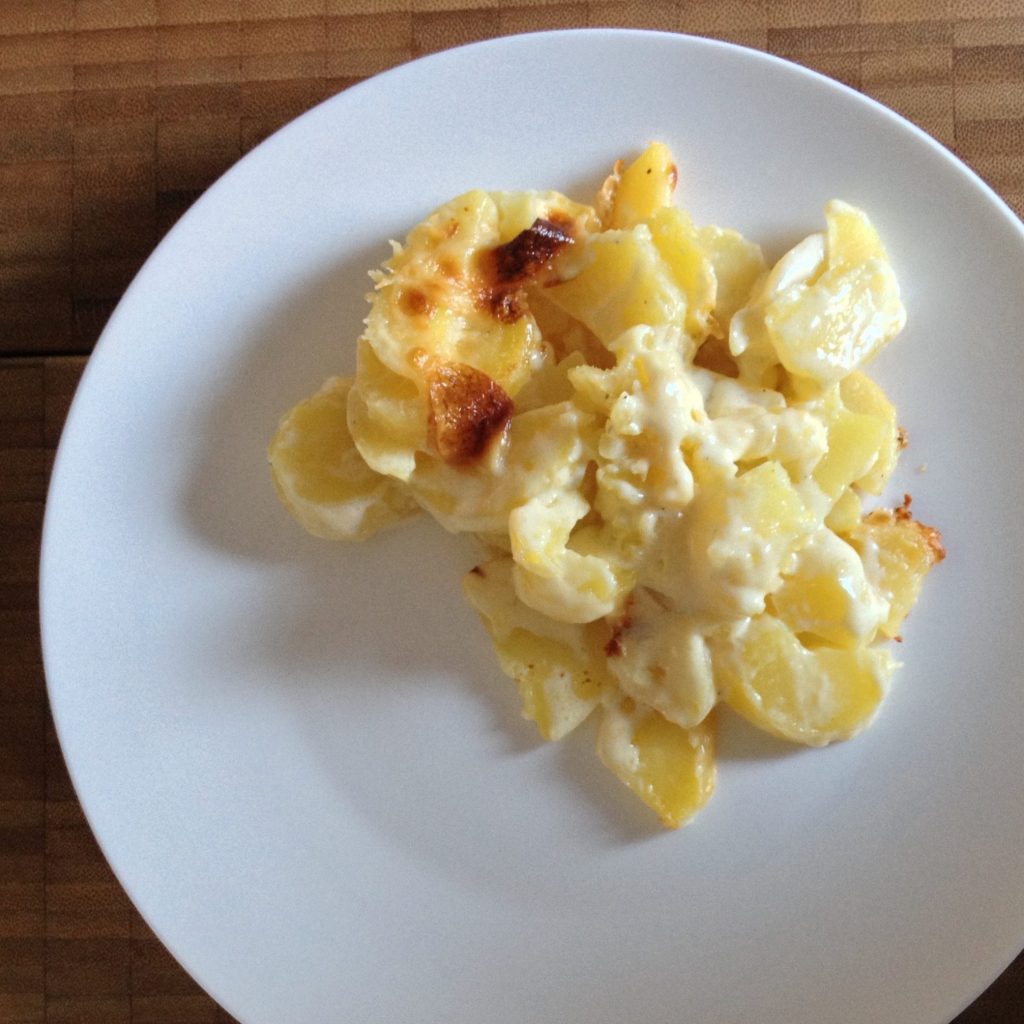 From now on we’ll deal w/ the present & concentrate on preparing the side dish!
(I was inspired to do it this way by Rachel Khoo’s cookbook from her little Paris kitchen.)

It’s quite simple – only a transformation: 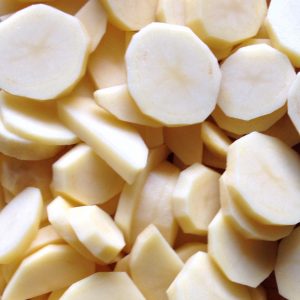 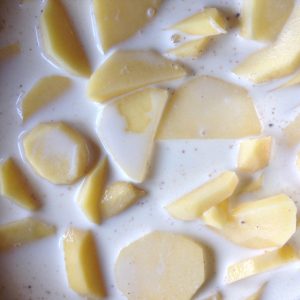 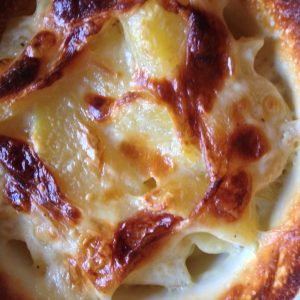 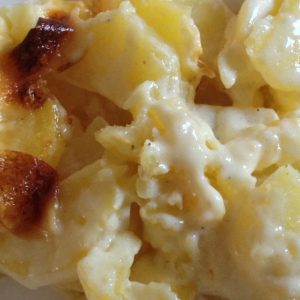 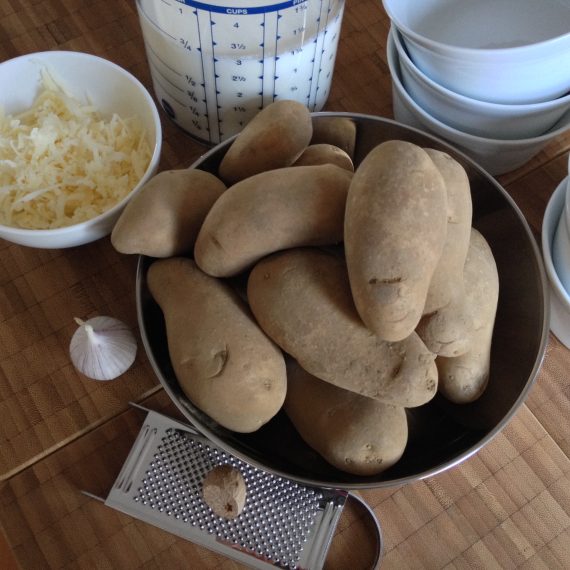 We peel the potatoes & cut them in slices of about 2-3 mm. I used waxy potatoes: therefore the potato slices will remain firm, however, don’t do the slices too thick!

We’ll use small casserole bowls for the side dish: therefore cut in half the potatoes if too large! 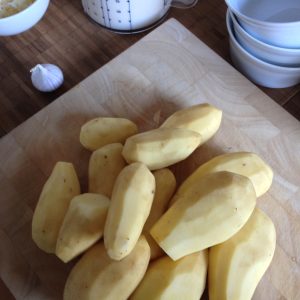 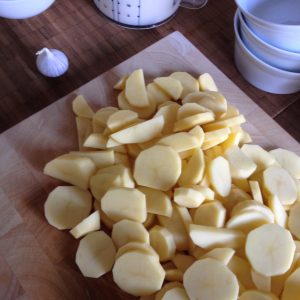 Mix the milk & the cream & add everything (i. e. salt & pepper & freshly grated nutmeg). I prefer just a hint of nutmeg, but feel free to add some more if you like!

Everything marches in a pot to be boiled – means: bring it to a boil & let it simmer afterwards. (Don’t forget to preheat the oven… (180 degrees C w/ fan).) 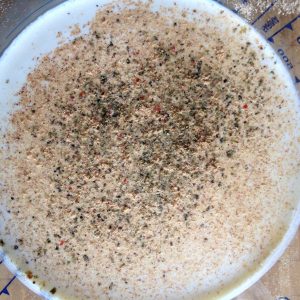 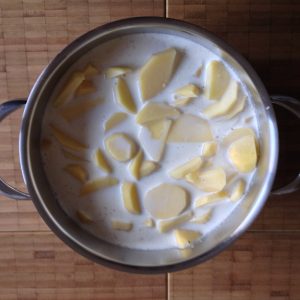 In the meantime we grease the casserole bowls w/ butter & add some garlic flavour. Cut in half the clove of garlic & rub the juicy edge around the buttered bowls.

(If you wonder about the clove of garlic: it’s Chinese garlic – same flavour – slightly other shape!) 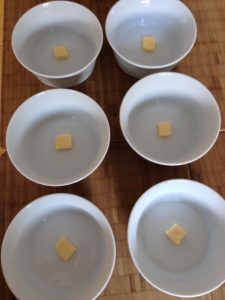 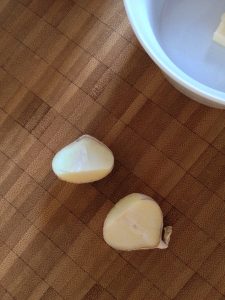 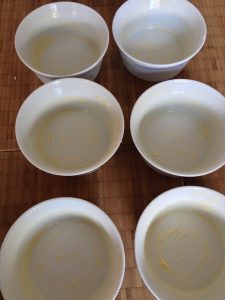 Finally our potato-milk-mix is ready! 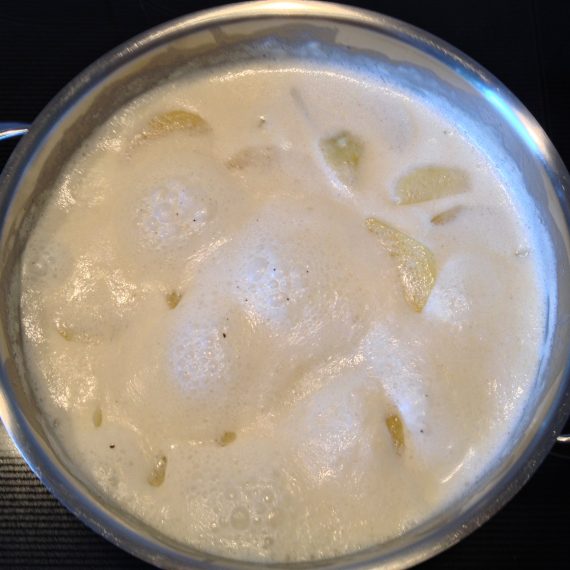 Don’t panic: I’ve tried it several times & never – NEVER – I had to deal w/ burnt milk on the bottom of the pot! (Means: no scraping, no rubbing, no soaking for endless hours, no special use of dishwasher tabs… only some residues which may be cleaned w/ a kitchen sponge!)

Next step:
Don’t hesitate to fill the casserole bowls w/ the hot potato-milk-mix. If you like some Gruyère for enhancing the flavour add it now: mix it in the potato mess & sprinkle on top.

Attention:
Don’t fill the bowls to the rim: leave at least 1 cm because the mess will start to bubble in the oven! 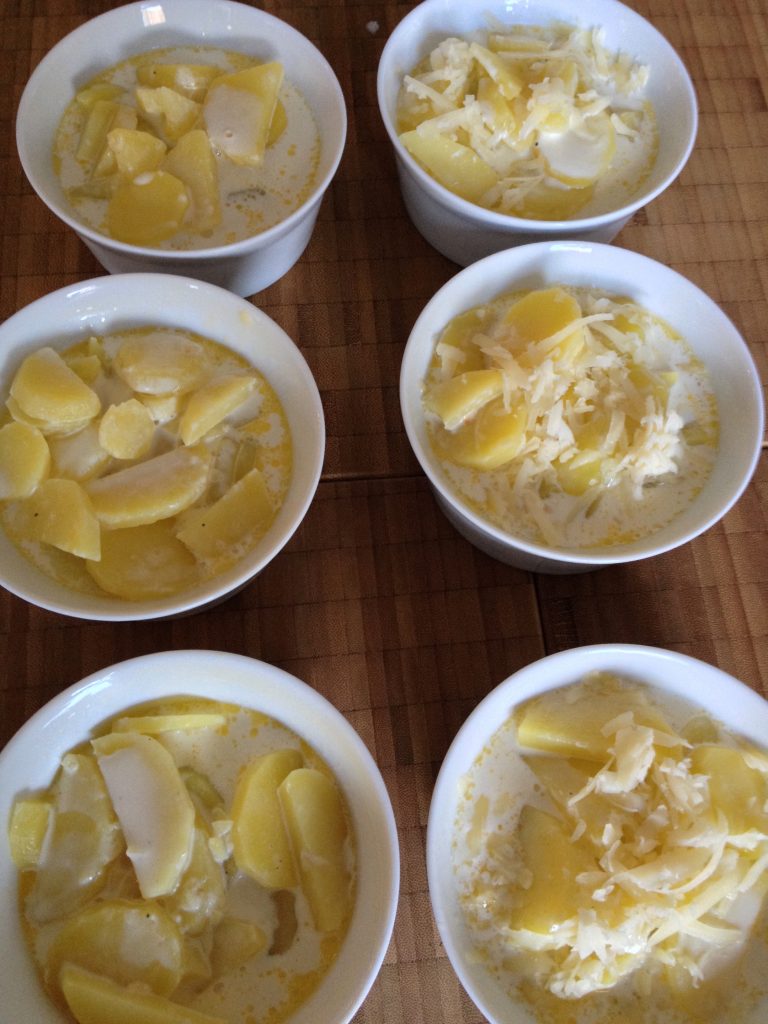 … & all bowls march in the preheated oven for about 30 min! 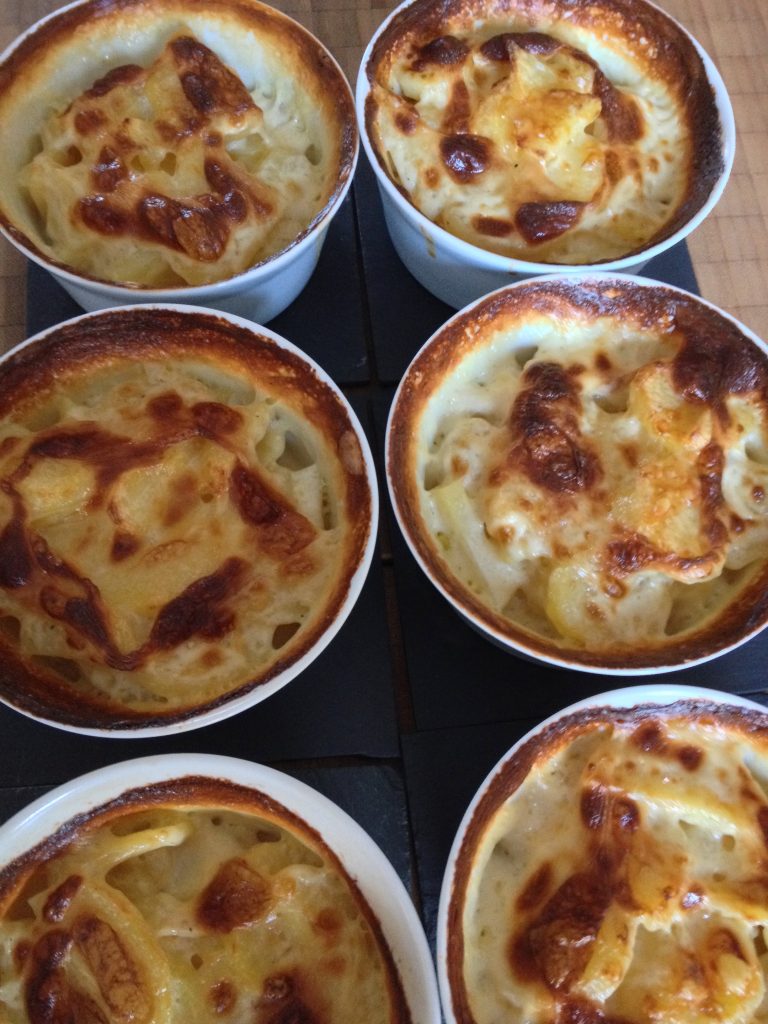 Ready to be served! 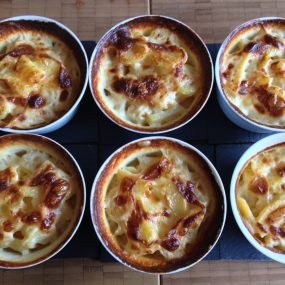 Print Recipe
royal potatoes
"Royal" potatoes aka gratin dauphinois aka potatoes dauphinois aka potatoes au gratin aka "a creamy potato bake"... Lots of names for one of the most delicious side dishes ever known!
Prep Time20 mins
Cook Time40 mins
ingredients:
equipment:
how to:
Notes
Cook Time: It's the boiling of the potatoes as well as the baking in the oven. If you like it more brown & crispy just add another 5 min to the oven session. Gruyère: Estimate about 15-20 gr per casserole bowl. Pepper: Feel free to add more pepper or reduce pepper. Nutmeg: Feel free to add more nutmeg or reduce nutmeg. I prefer just a hot of nutmeg. You may stop the preparation after having filled the casserole bowls w/ the hot potato-milk-mix for some hours or even overnight. Just put the filled bowls in the preheated oven about 30 min before serving. You can also store the ready-to-serve casserole bowls in the fridge & reheat them in the microwave. Leftovers may be stored in the fridge for up to 3-4 days. (Don't dream of any leftovers...) 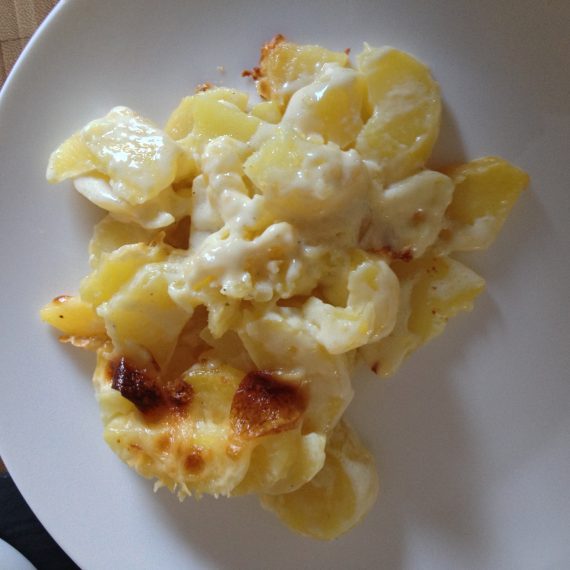 W/o Gruyère it’s a softer flavour – w/ Gruyère there are little sharp edges: choose whatever you like more!

It’s possible to do it w/o pre-boiling… then you’ll need more time in the oven!

You may prepare the casserole bowls w/ the precooked potato-milk-mix some hours before (or even during the previous day), store them in the fridge & put them in the preheated oven just about 30 mins before dinner’s main course.

What else?
Well: we don’t count calories (remember rule #1), but I reduced the original amount of “fat” (double cream of about 40% by using cream of 32%) in the side dish… somewhat… it doesn’t harm the softness, but it’s “lighter”!
However, be careful: I did some experimental work & found that it won’t end well if you use any low-fat cream (about 15%) or low-fat crème fraîche (about 15%) or sour cream (neither 20% nor 10%) or… it’ll coagulate & ruin the potatoes!

The businesswoman with too many office hours thinks

I always had in mind – deep-seated – that potatoes au gratin/dauphinois etc. are a rather complicated dish w/ lots of mantraps… (I really don’t remember where I got this idea!) Then I realized that it’s quite easy, but might become a very rich dish! So now I see that it’s easy & not-so-rich, but still delicious!

The precooking of the potatoes doesn’t take so much time & effort: the finalization in the oven comes faster…