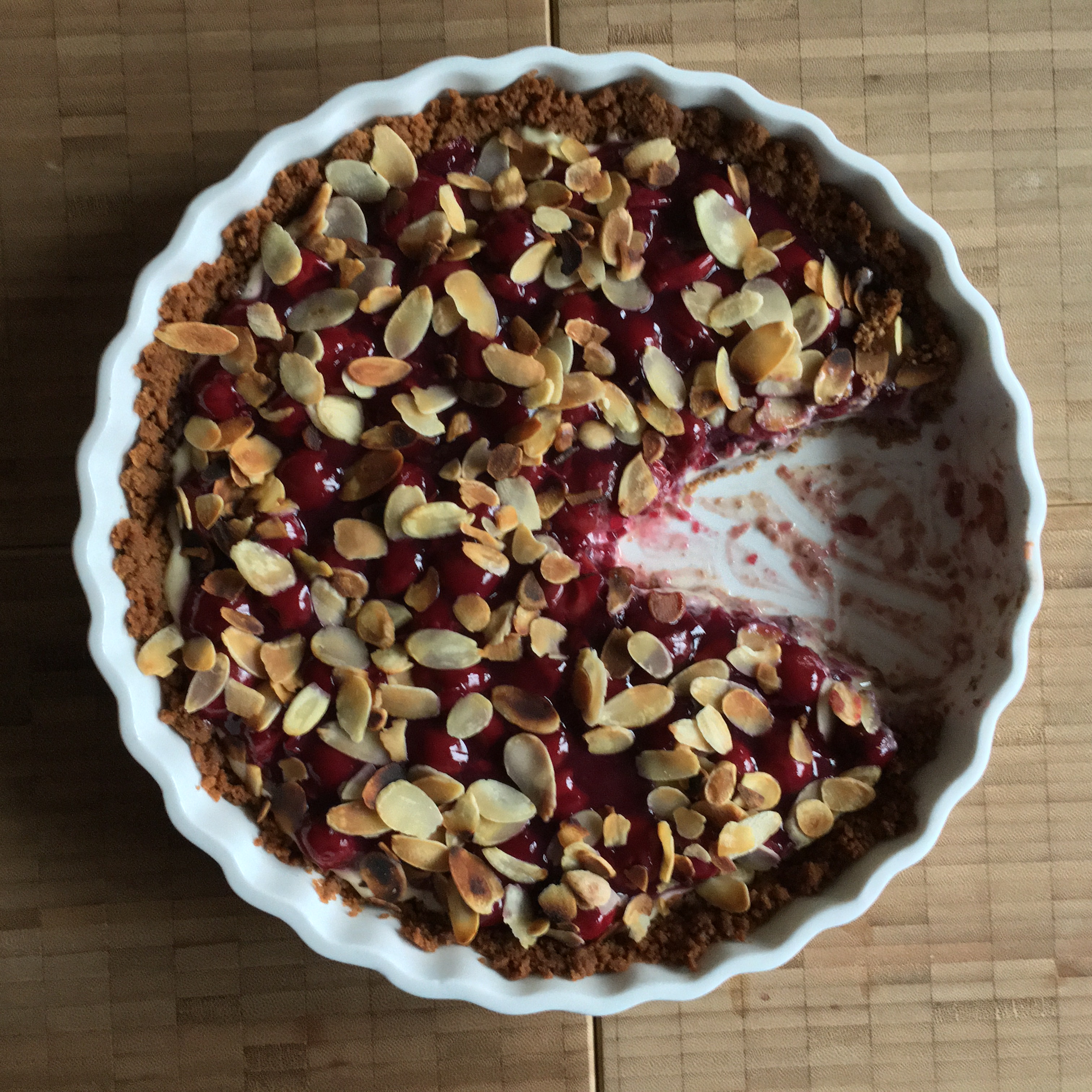 When looking at the photo it’s exactly what I intended to create: a tart made w/ a shell of spekulatius & its wonderful Xmas flavors, some chocolate to seal the shell, some vanilla custard for the creaminess, some morello cherries for the freshness & on top lots of roasted almond flakes.

What I planned was to get nice slices of the tart … instead it became a mess (see below).

For the record:
The crispy spekulatius shell didn’t like to break away from the bottom of the tart form so that there were no nice slices … I never experienced this effect before – I swear. What I managed was simply getting some smaller or bigger chunks of the tart mess onto a plate. Well, the 1st slice of tart is always a tricky affair, but later … normally …  Ok – it became better during the next day.
I thought about forgetting about posting this dessert, but – honestly – the flavors are great, the spekulatius shell is really crispy (also next day & further), the mix of chocolate, morello cherries & vanilla custard is delicious … So I decided to post the recipe & unfold my optical disaster.

I think you get from this photo what happened: all mixed up after trying to get it out of the tart form. It was worst when I took the tart out of the fridge – later on when at room temperature serving became somewhat easier. (Nevertheless it is delicious!) 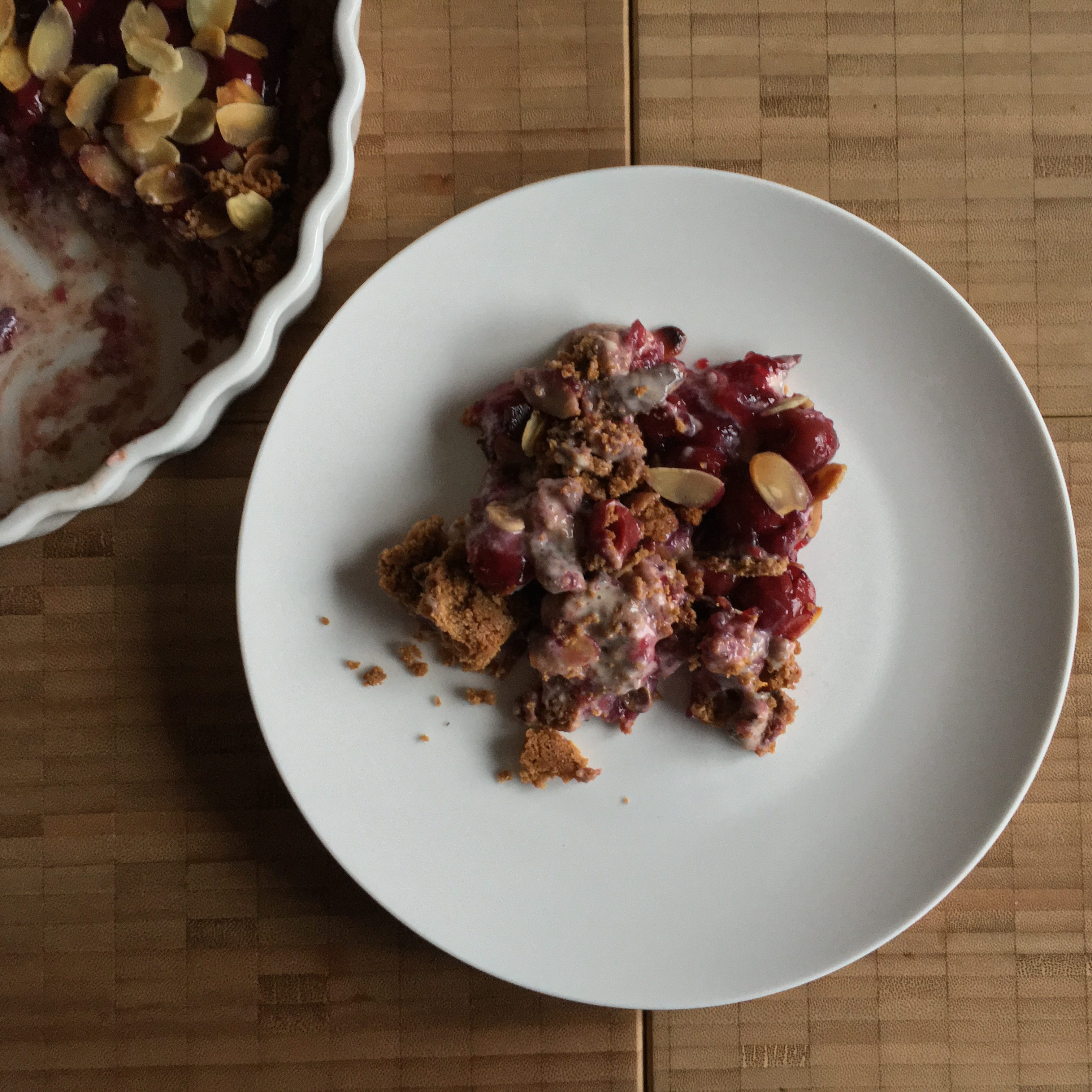 However, coming back to the idea … Since some weeks I feel overwhelmed by posts – in blogs, in facebook, in Instagram  … wherever – w/ recipes & photos of Xmas bakery. There are lots of these delicately baked & decorated cookies of all kinds: even if only looking at them you get a fair impression about the workload linked w/ preparing these precious little bites.

Well, Xmas is approaching & I thought that a post about some Xmas inspired dessert couldn’t be wrong at all.

… something that won’t take too much time during these busy days!

Whatever … what do we need? 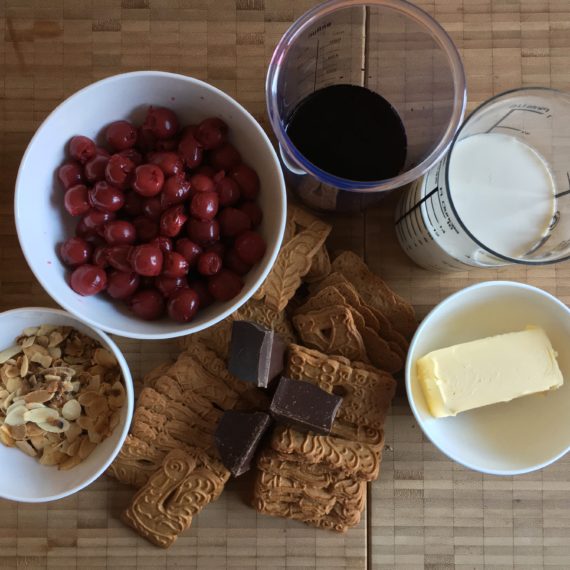 Then we put all spekulatius in a sealable freezer bag & work it w/ a rolling pin until we get very fine crumbs.

For the record:
You may also use a food processor if there is one lingering on your kitchen counter.

We melt the butter, add the salt & mix w/ the spekulatius crumbs.

We distribute the spekulatius mess evenly in the tart form & press slightly before it marches in the oven for about 10 – 15 min. Afterwards we have a very crispy shell! 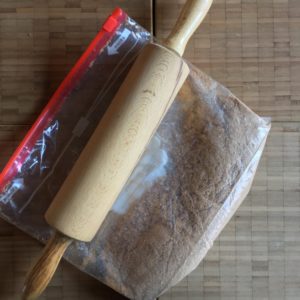 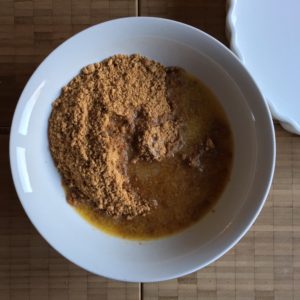 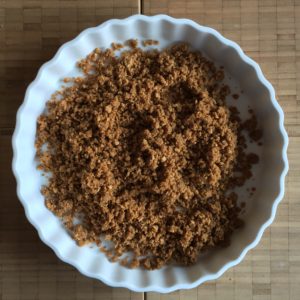 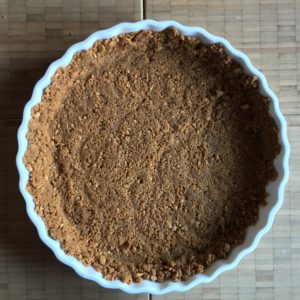 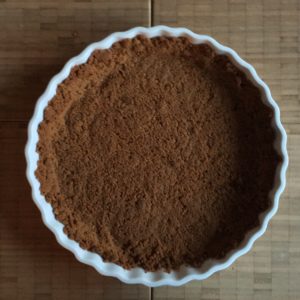 The spekulatius shell has to cool down …

In the meantime we prepare the morello mess.

We bring the morello juice, the red wine & the sugar to a boil, add the morello cherries & bring it again to a boil.

We mix cold water & corn starch & add it to the boiling morello mess. As soon as it starts thickening we put it aside & let it cool down.

For the record:
It’s possible to add cinnamon sticks, cloves etc. to the boiling mess for additional flavour … (& discard it afterwards!) I didn’t because my plain spekulatius was rather flavorful & I thought that it might be sufficient for a decent Xmas flavour. 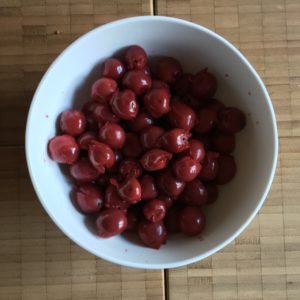 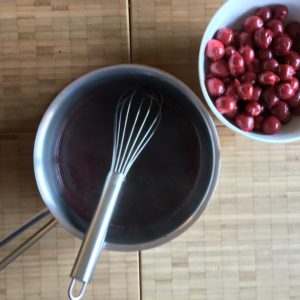 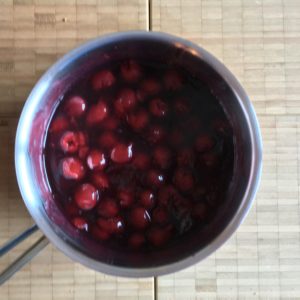 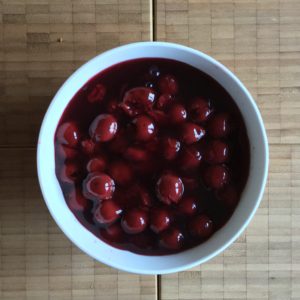 In the meantime we cook the vanilla custard.

For the record:
I didn’t do the vanilla custard from scratch, but bought a packet of ready-to-use vanilla custard powder. The packet said that I’d need 300 ml liquid & I made a mix of milk & cream.

When ready I set the vanilla custard aside to cool down. 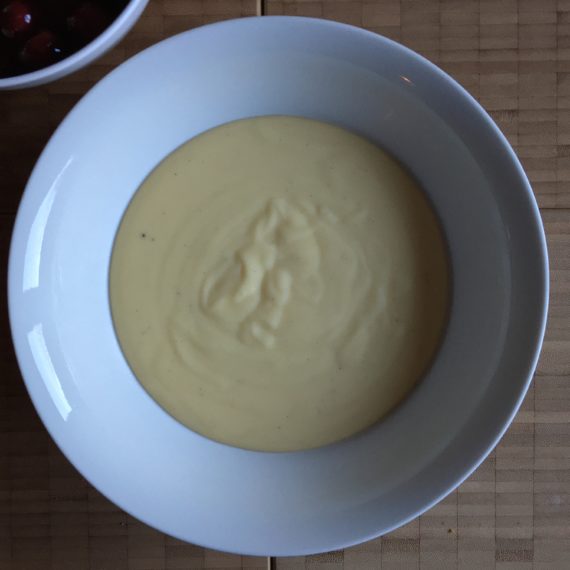 As I experienced there is a lot of time necessary to do all the cooling-down actions although I relied on my friend, the fridge. So you get a lot of time to clean the kitchen in the meantime or do whatever you need to do.

Attention:
If you don’t happen to have some roasted almond flakes from any previous baking adventure it’s time to think of roasting almond flakes in a pan. Now.

However, finally the spekulatius shell will be ready for further processing.

We melt the dark chocolate in a bain-marie, spoon it evenly over the shell & distribute it w/ a brush. Afterwards it goes again into the fridge because of chilling the chocolate. 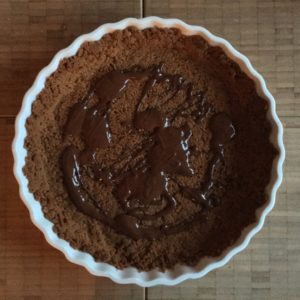 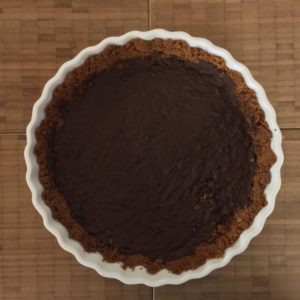 Finally we spoon the vanilla custard evenly all over the bottom of the shell.

Then we add the morello mess.

… & at last we sprinkle almond flakes on top. 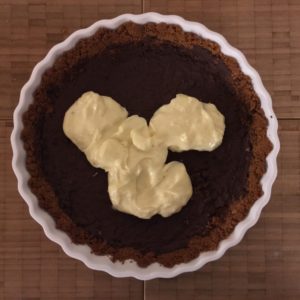 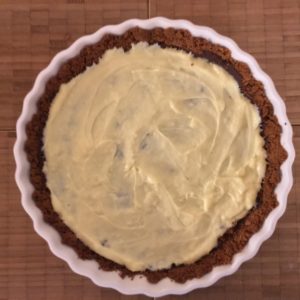 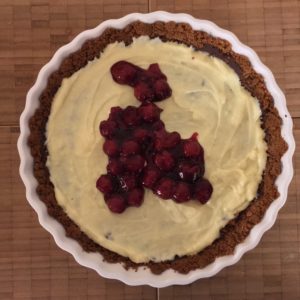 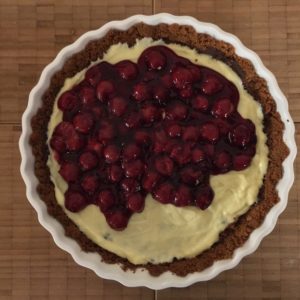 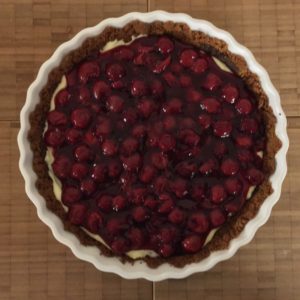 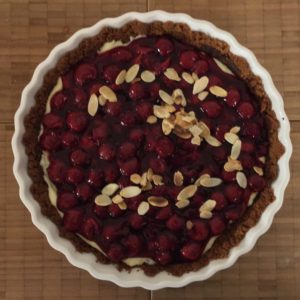 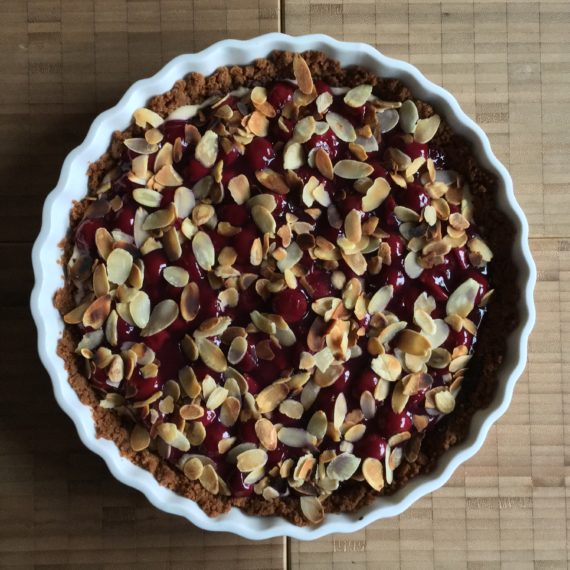 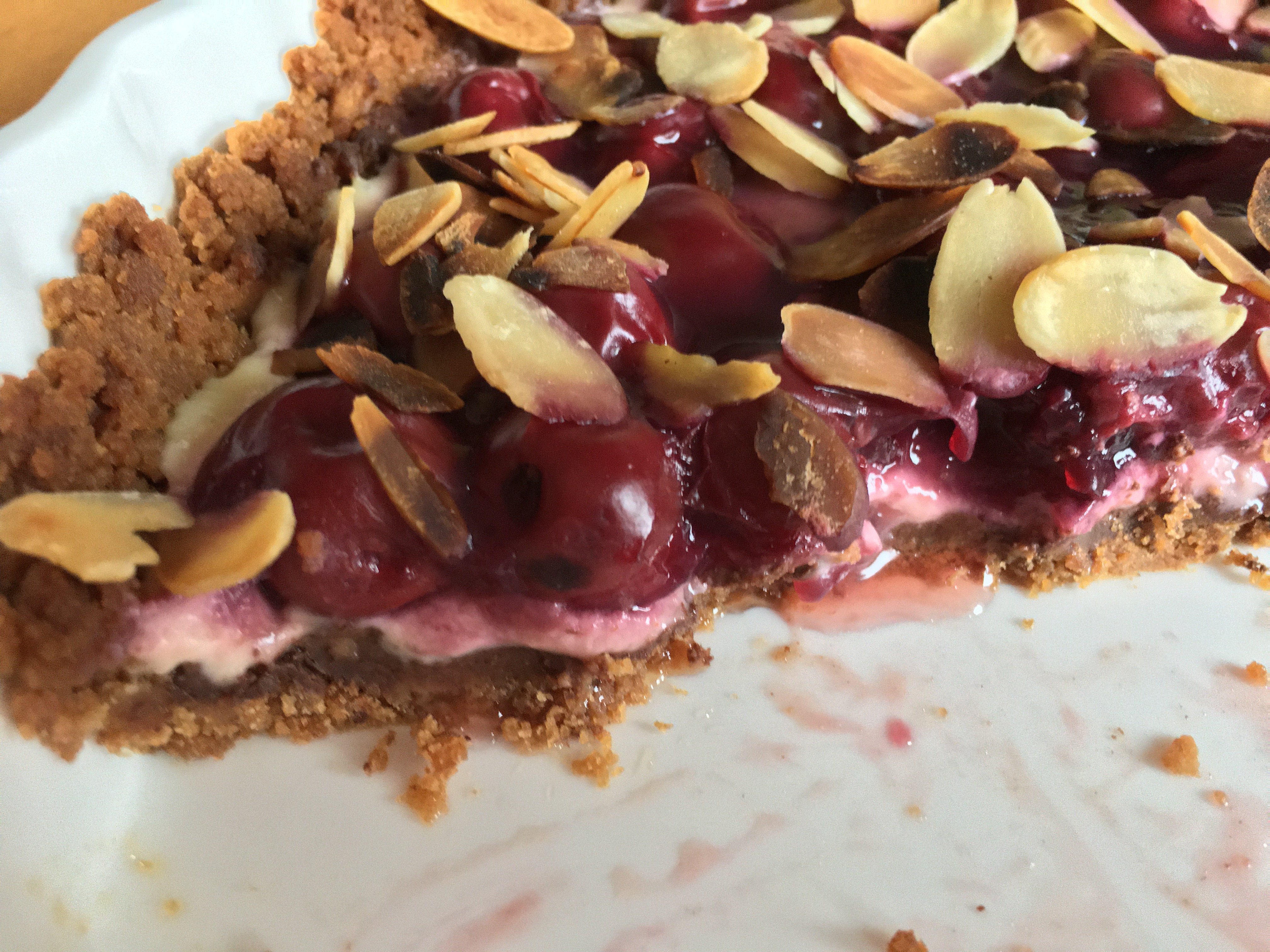 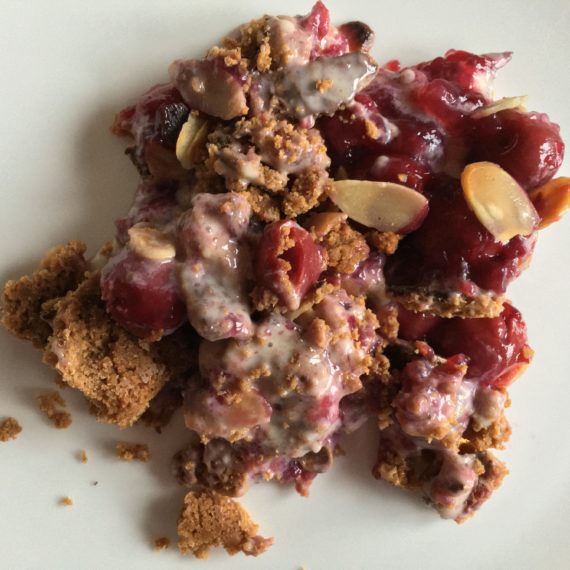 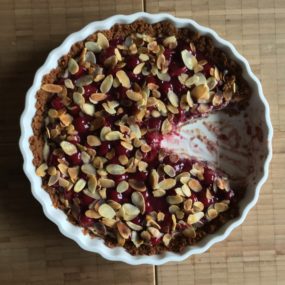 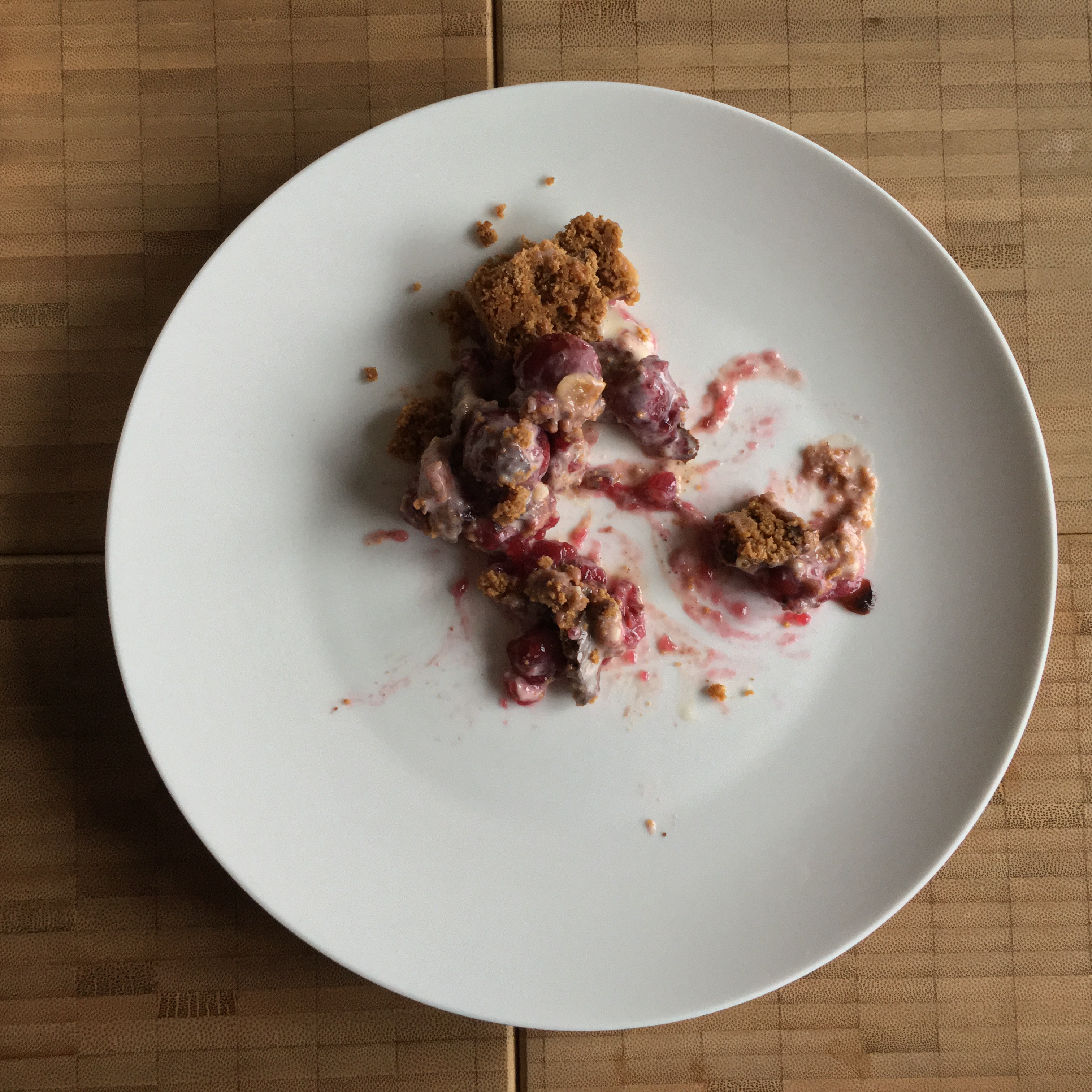