First of all: the cookbook*:

Around last Xmas friends – partly Irish friends – gave me this cookbook as a present. Rather soon I indulged in the recipes & the photos as well – it’s not only a cookbook, but also some sort of travel report.

My better half & I travelled about Donegal – Ireland’s most Northern county – some years ago… a lot of years ago: it’s amazing how time flies! We stayed in our friends’ beautiful house near the Atlantic coast. Each day started w/ an extended Irish breakfast (imagine an English breakfast w/ Irish bacon & Irish eggs…) but that’s another story…

Rachel Allen travelled along the Western coast from Cork in the South to County Donegal in the North having encounters with lots of culinary hotspots & learning about recipes that warm your heart & your belly.

During the last months I roamed her cookbook & tried some recipes:

Here are the original recipes…

What’s the cookbook about?
We are travelling along the Irish Atlantic coast so there is fish, fish, fish… (primarily) fish!

For the record:
The cookbook w/ 304 pages has about 104 recipes. About 37% are related to fish and/or seafood.

Altogether we find recipes for starters, for main courses & for desserts as well as recipes for vegetables & bread & drinks. The recipes are not arranged by their type nor by their main ingredients, but it’s the travel along the coast that reigns the book. Each chapter represents a stop in the journey & offers some characteristic dishes for the region.
Well…I shouldn’t forget to mention that there are also lots of breathtaking photos of the Irish Atlantic coast & its nearby region accompanied by notes on the landscape & the highlights!

The recipes are clearly laid-out & some mouth-watering photos lead your way.

At first:
It’s a pleasure to read the book, to follow the itinerary – just to start dreaming about going to Ireland next summer.

Thirdly:
You won’t find it too difficult to try out any recipes of the cookbook. (Meaning: you’ll need no fancy (or exotic) cooking equipment, you’ll need no fireplace… – your pots & pans & casseroles will do!)

If you look for a dinner menu which may be prepared in advance (at least partially!) & has (partially!) to be put in the oven or the microwave or so – just before dinner – I’m sure you’ll find something in this cookbook.

Comic back to the fish:
I buy fish in my trusted food store or deep-frozen – well: no fish monger around the corner.
Alas:many nice interesting fish (of this cookbook) aren’t available. Does it really matter?
No – as a rule you may be able to substitute. In the Businesswoman’s Kitchen that’s way of everyday life… Just look for a similar fish & it’ll work.

When exploring the recipes you may also stumble about some ingredients which don’t seem Irish… Well: chorizo isn’t really Irish by nature, but comes from Spain (as far as I know…). The pasta recipes may also be originated in Italy (although international by now), some Chinese spices mingle w/ Irish poultry…
So we are dealing here w/ Irish cooking here & now!

To follow up the travel experience of Rachel Allen’s book here are some impressions of our stay in County Donegal years ago: 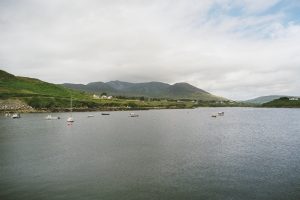