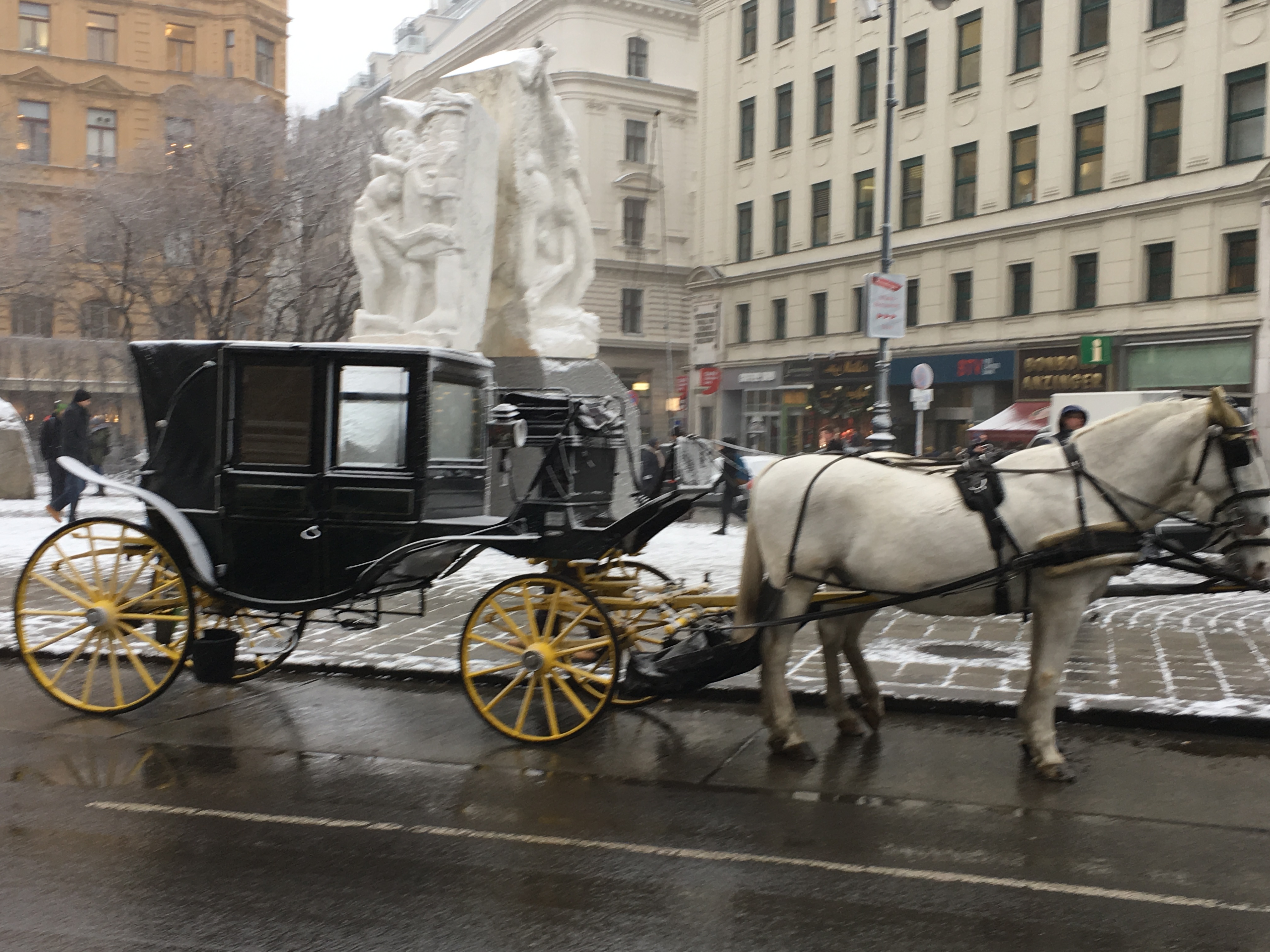 Arriving in Vienna meant arriving in light rain which turned into light snow & more snow during the following days… The cold dampened our activities, but we had a lot of fun “inside Vienna” – and we’re sure that we’ll return to Vienna in spring or summer for “outdoor Vienna“.

We spent a long weekend in Vienna before X-mas 2016 & had some great insights in Vienna’s culture & traditional cuisine. Although we originally planned to roam the alleyways of the 1st Quarter (1. Bezirk) looking for small interesting shops, coffee houses, famous shops, having coffee & cake in between, shopping a little (or even a little more…) & the weather didn’t play along – Vienna was just great!

Now as a start our reliable travel companion*:

For the very 1st time in 2016 Xmas season we experienced snow! Have a look at the magnificent St. Stephen’s Cathedral in mist & snow… 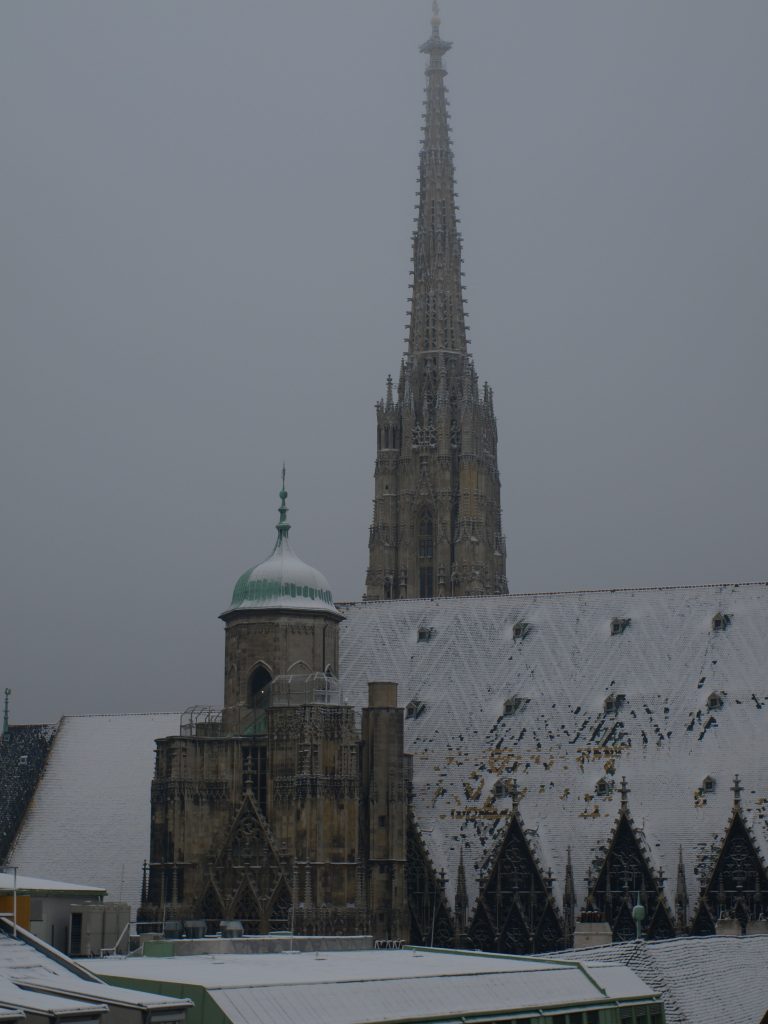 Due to the weather conditions we preferred to stay “inside Vienna” & reduced walking Vienna’s alleyways to the mere necessity. “Inside Vienna” meant St. Stephen’s Cathedrals as well as the Hofburg… (not to mention coffee houses, restaurants, bars…).

Around the cathedral spreads a nice small Xmas market where we bought a beautiful red & golden Xmas bauble – somewhat in a hurry because an ice cold wind swept across the open space.

Fortunately the Hofburg wasn’t far away: of course – because the imperial family lived here & prayed there. The Hofburg is big, vast… having lots of inner gardens, housing the Spanish Riding School (we sneaked a peek of a Lippizaner in an inner courtyard) as well as museums like the Albertina (in part a picture gallery, in part displaying the original palace rooms).

We approached the Hofburg… 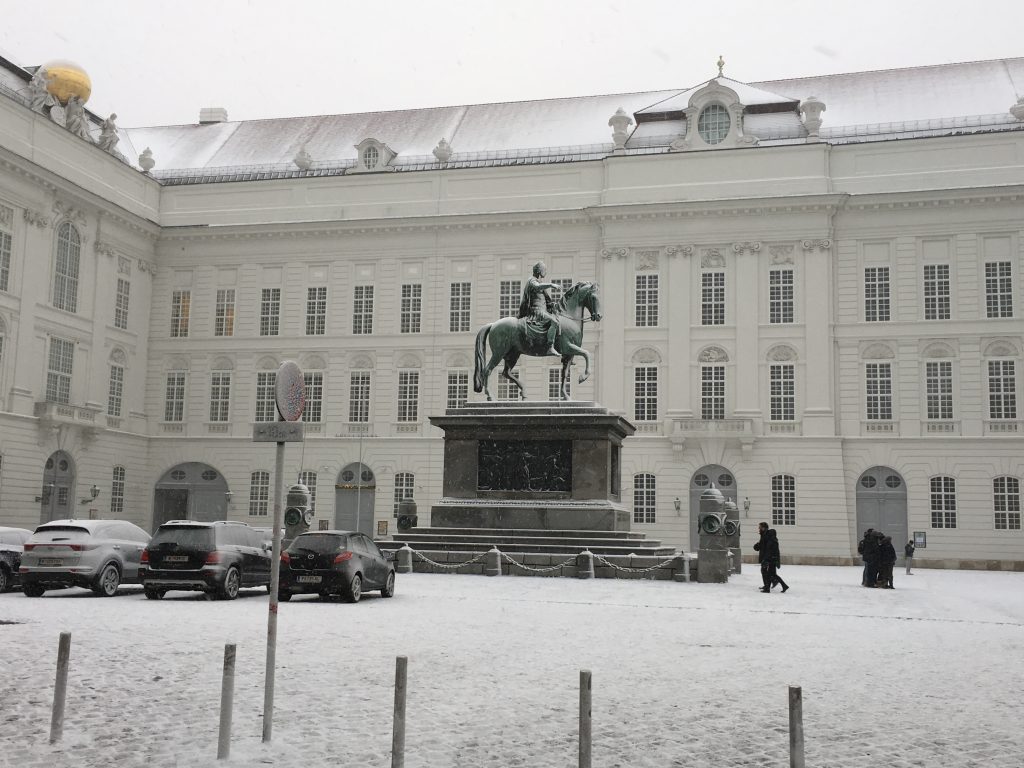 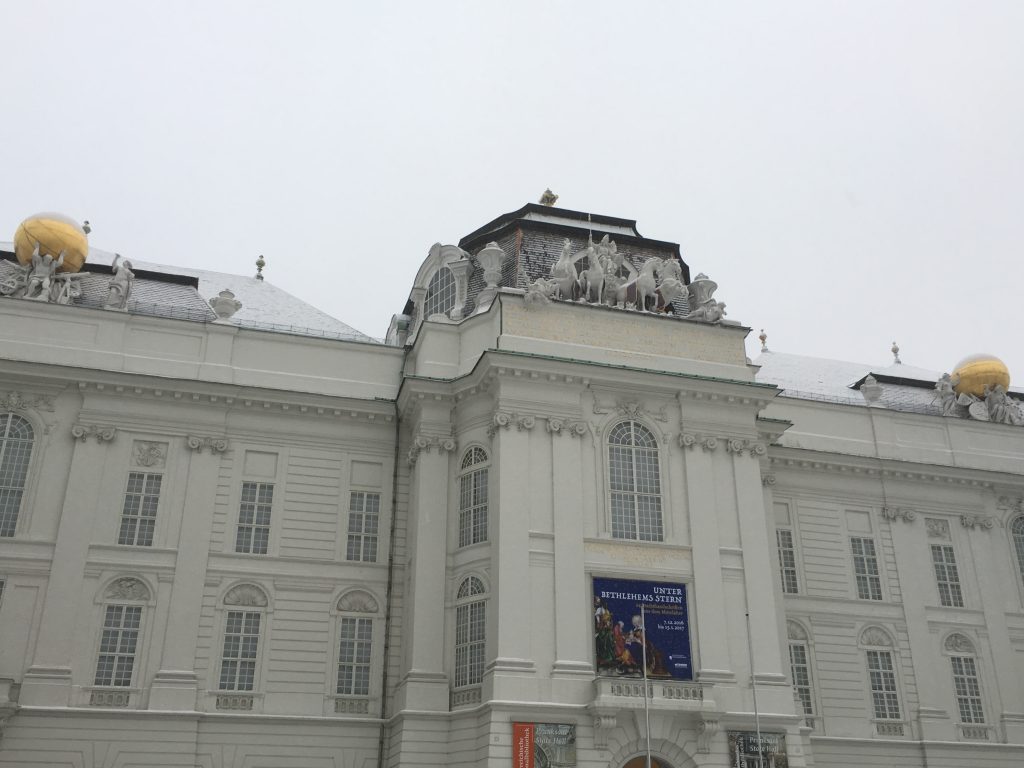 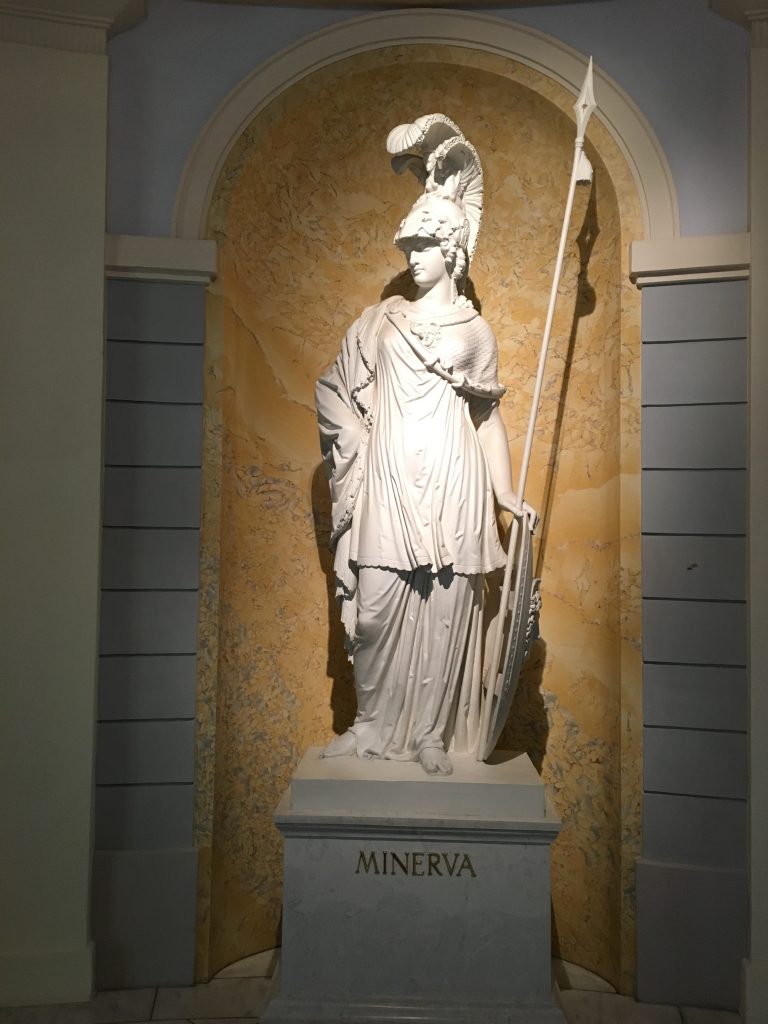 In the former imperial rooms of the Albertina there were (only some minor detail!) lots of elaborately decorated stoves – & there were not only a yellow room & green room & a red room, but also a blue room & a white room…

Nevertheless our main interest was directed at the Imperial Apartement in the Hofburg – yes: I’m talking about the apartment where Franzl & Sisi lived… (aka famous Emperor Franz-Josef & even more famous Empress Elisabeth).

For the record:
Empress Elisabeth was nicknamed “Sisi” in her family. When the movies started to film her life in the 50s (3 movies starring Romy Schneider & Karl-Heinz Böhm) it was decides to call her “Sissi” because it sounded more catchy.
…& Franzl was 18 when becoming emperor & 24 when marrying 16-year-old Sisi. 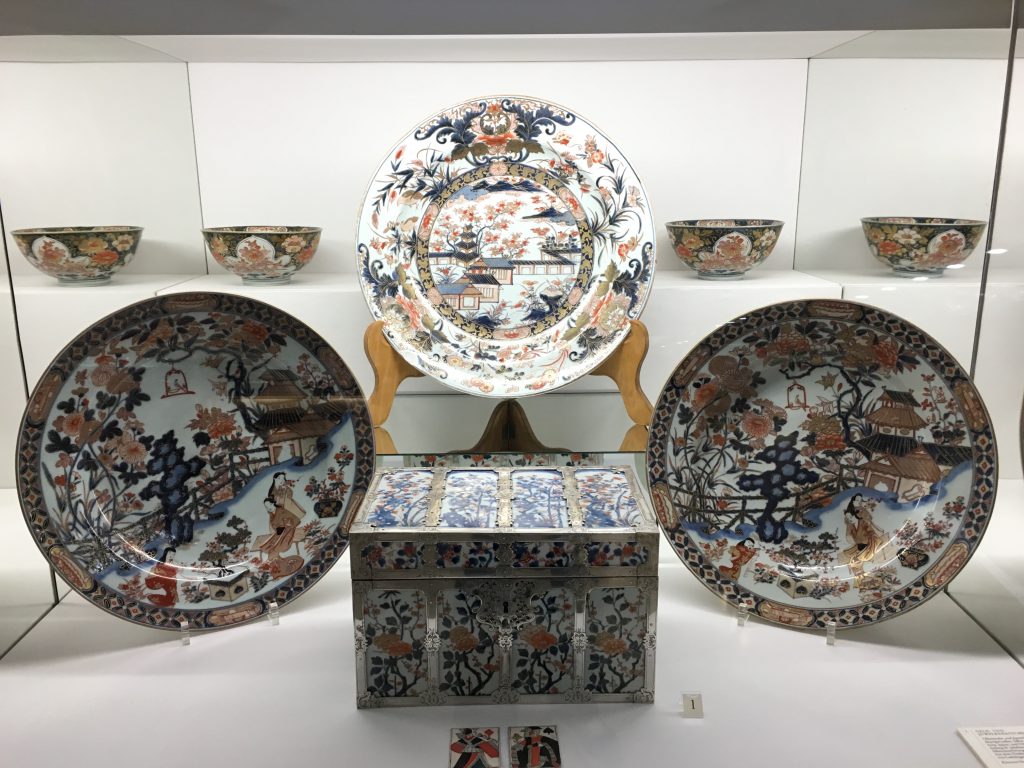 Finally you’ll arrive at the Imperial Apartments which seemed – at least to me – rather small compared to the giant Hofburg. There is the famous official Sisi painting as well as the – not less famous – private Sisi painting (you know: there’s the one where Sisi has her hair done & wears all the jewels & there’s the one where Sisi wears some sort of negligee w/ all her hair flowing around her).

Back to Vienna’s alleyways: we admired Vienna’s elaborate architecture w/ all the buildings from the last centuries. Most intriguing is this unique mix of old buildings (& some new ones), of small shops & flagship stores, of alleyways for pedestrians only, of restaurants & bars, of companies’ offices & apartments… It’s really a living “1. Bezirk”! 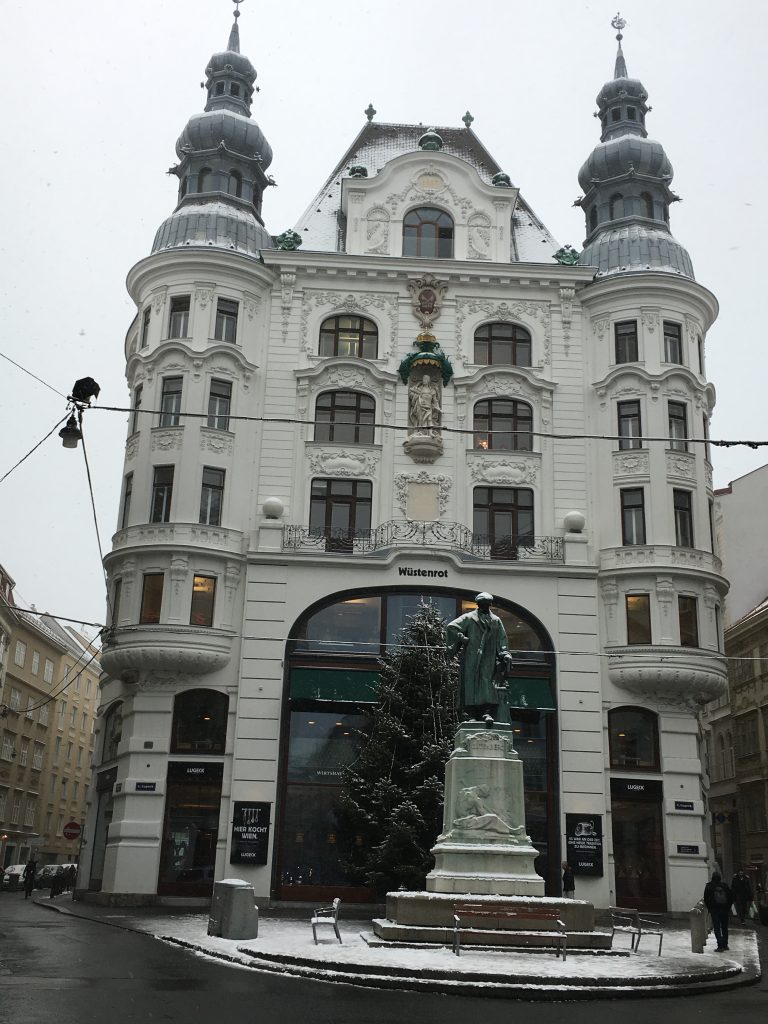 What did we eat?

We had delicious breakfasts (aka continental breakfasts) w/ fresh rolls & croissants & warm soft-boiled eggs in a glass w/ butter …. & exquisite coffee!!! (…& you get a piece of cake (Bundt cake) as an extra!)

For dinner we decided to stay w/ Austrian traditional food like:

My better half & I – we liked all of it very much!
(Is there any other reason for travelling like enjoying original local cuisine?)

Now a glance at the Xmas decoration at night. The giant red light spheres are impressive especially when sitting on 1st floor in a bar… 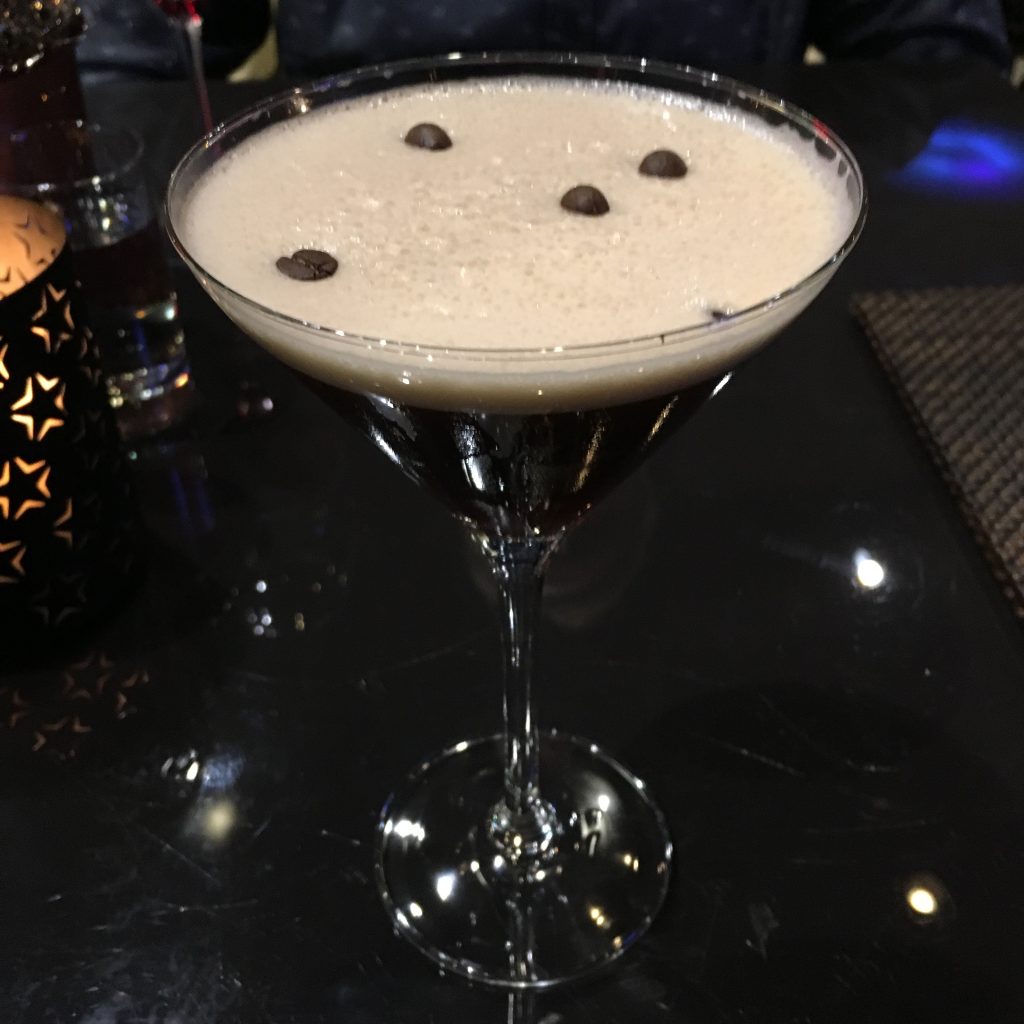 A happy New Year to you all!

Vienna: we’ll be back soon in spring or summer to experience the Hofburg in full as well as Schönbrunn (another imperial residence), Belvedere (another …) & all the outdoor adventures we missed this time (…& all the coffee houses…)!

…& once again our trusted travel companion*: