Marrakesh – one of the mythic places of the world? In my notion: well, yes – a mysterious exciting place arousing curiosity over & over again, a very old religious force once reaching up to Southern Spain, a traders’ emporium connecting Sahara desert’s horsemen & warriors w/ Europe & Middle East – as well as a famous hippies’ paradise in the 70s becoming a notorious cosmopolitan party community in the 80s & 90s… until now…

Last week my better half & I made a holiday trip to Marrakesh. When going over my memories I suddenly realized that I’ve got a lot to tell… so I decided to do it twice:

Where to start? Of course in the thick of it!

This is Djeema El-Fna, Marrakesh’ huge market place known since about 1050 w/ the towering minaret of the Koutoubia Mosque from the 12th century.

Speaking of monuments the mosques are allover Marrakesh (aka Medina aka old town) w/ their elaborately decorated minarets. Another fine example is the Kasbah Mosque – also built in the 12th century: just look at the thumbnail picture. Alas! Mosques in Marrakesh are only open to Muslims – so there is no further viewing.

In the inner courtyard:

… & a trip inside the Medersa’s studies:

In the school lived up to 900 scholars – today it’s a historical monument.

All the graves are watched over by lots of feral cats: look closer to spot one of them amid the tomb slabs.

Enough of mosques & minarets, Koran school & tombs: let’s get some feeling for the palaces. (Well: the Royal Palace is beyond access – of course).

In the 16th century Badi Palace was built – to exist for about 75 years (it was destroyed by the next ruler over Marrakesh). It’s a vast symmetrically designed palace w/ an interesting “underworld”… 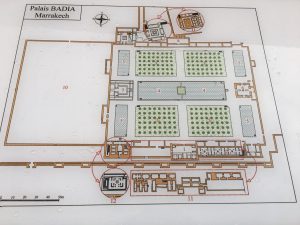 Under the gardens, the water basins & the buildings are lots of corridors & chambers meant for servants to do the housework, the cooking, transporting whatever was ordered w/o disturbing the Sultan…

Bahia Palace (from 19th century) is beautifully restored & even used for official functions by the King of Morocco. There are several courtyards & walled gardens, mosaic-covered floors & walls & beautiful wooden ceilings…

Some palaces have been turned into museums: my personal opinion is that it’s worth visiting the museums alone because of the palaces…

Let’s begin with the Musée de Marrakech in the Dar Menebhi Palace (from the 19th century):

The yellowish shine is due to the effect that the main courtyard was roofed over having the museum artifacts in mind.

Finally we’ve found Dar Si Said – well hidden near Bahia Palace. The Palace turned museum was also built in the 19th century, but time has left its imprints – only few rooms seem to be restored until now.

…& now: Le Jardin Majorelle (aka The Blue Villa aka YSL’s former home in Marrakesh (in the Nouvelle Ville): 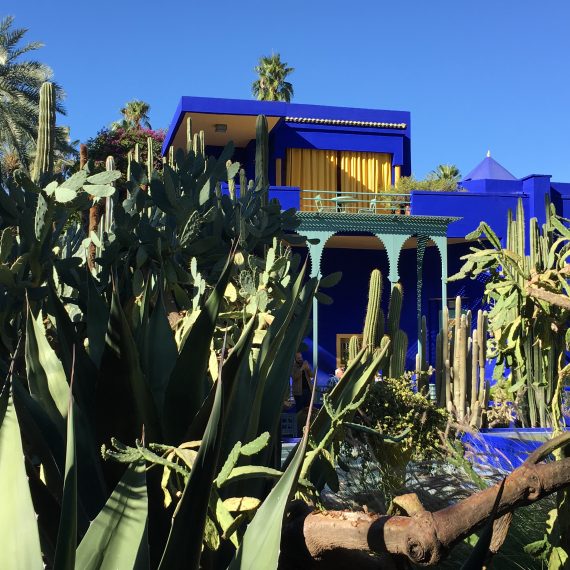 This is the end! No – of course it’s not the end: tbc (aka to be continued) about life & the rest of it…

For today I think you’ve got an impression of the mosques & minarets, the palaces, the courtyards & the inner gardens &… Marrakesh is full of history laid out in sunshine inviting you to stroll the Medina & its alleyways looking for its hidden treasures.

…& once again our travel companions*: