Marrakesh – one of the mythic places of the world? In my notion: well, yes – a mysterious exciting place arousing curiosity over & over again, a very old religious force once reaching up to Southern Spain, a traders’ emporium connecting Sahara desert’s horsemen & warriors w/ Europe & Middle East – as well as a famous hippies’ paradise in the 70s becoming a notorious cosmopolitan party community in the 80s & 90s… until now…

2 weeks ago my better half & I made a holiday trip to Marrakesh. When going over my memories I suddenly realized that I’ve got a lot to tell… so I decided to do it twice:

…& we are on Djeema El-Fna…
It’s the same place, only another view. Pls note the ocean of satellite dishes which is somehow characteristic of today’s Medina! (I don’t think that there’s any house w/o a satellite dish!)

The later the day the fuller is Djeema El-Fna – especially from late afternoon on more & more food stalls open and more & more jugglers & impostors fill the space w/ snakes, fire-eating, sword swallowing, music… Somehow the market place – at this time of the day – reminds me of some fake medieval fair in a historic Hollywood B movie – that’s definitely not my scene!

What is the Medina?

The Medina is the heart of Marrakesh – from the very beginning (you may also call it “old town”…) … & Djeema El-Fna is the center of the Medina.

The Medina is walled by extensive ramparts which are undestroyed until now. There are lots of gateways leading into the Medina (… & it’s essential to know the right gateway if you ask a taxi driver to take you to your riad… – more about this later…). Most of the streets & alleyways in the Medina are narrow, very narrow lined by high ochre walls of mansions & houses.

Within the Medina there is the Kasbah, another walled city from the past fortified in the 11th century. The heart of the Kasbah is the Royal Palace which is – of course – walled once again… In Marrakesh all these ancient walls & ramparts & palaces & fortifications are intact. With some restrictions – e. g. the Royal Palace – you may walk all over the place & admire them.

Did time stop in Marrakesh? No – just remember the satellite dishes… & you won’t miss the experience of lots of motorbikes dashing through the alleyways all the time… & you won’t also miss almost everybody engrossed in her/his smartphone’s display..

My better half & I had booked a room in a riad. A riad is a rather big former courtyard mansion turned into a hotel – there are some hundred riads in Marrakesh’s Medina. Our riad sent a car to the airport to pick us up – fortunately… So we arrived finally at the beginning of an alleyway (too small for the car to proceed!)… & finally after about 50 m there was the entrance door…

Once we’d entered the riad quite another world opened to us!

The riad has only 7 rooms located around the courtyard. The inevitable fountain is replaced by an large olive tree. We were surprised at the quietness inside the riad: only splashing from the pool & chirping of lots of birds living in the palms.

(Of course: in the Medina each morning short before dawn the muezzin calls w/ help of loudspeakers…)

The courtyard serves as breakfast lounge under a blue sky in the morning & as dining hall under sparkling stars at night. (Of course: there is also a covered area w/ a fireplace if mornings/evenings are too chilling…)

We loved to return to our riad after a long day’s walking adventures in the Medina to relax on the balconies or on the rooftop w/ a glass of Moroccan red wine. (Yes: in the riad there’s wine available!) 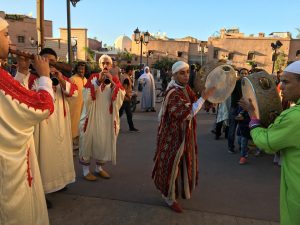 While Medina’s Southern part is rather open & joins the “rest of Marrakesh” there is the “maze of alleyways” mainly in the North & East & West… around Djeema-El-Fna. The “rest of Marrakesh” is a very modern city – I’m thinking of quarters like “Nouvelle Ville” etc. which resemble modern Southern European cities w/ shopping malls, glittering hotel facades, 4-lane-roundabouts etc. We made only a single short trip into this part of Marrakesh which is a lot larger than the Medina when visiting Le Jardin Majorelle – YSL’s legacy.

Coming back to Medina’s maze & the traffic.

This is typical for an afternoon on Djeema El-Fna: lots of stalls, lots of people/tourists, lost of yellow taxis, lots of bikers & Moroccan “tuk-tuks”, donkey carts, colorful horse-drawn carriages… Be sure that each alleyway in the Medina is crowded w/ taxis (if wide enough!), w/ motorbikes (I estimate that there are at least 10 motorbikes pro taxi!) & all the rest mingling w/ locals & tourists – often a risky adventure.

Before deep diving in the alleyways let’s talk about taxis. Generally taxis are cheap (compared to Germany’s pricing)… however, all taxi drivers try to optimize (let’s refer to it this way!). Of course, all taxis have got a taximeter, but unfortunately it doesn’t seem to be working… never. So we learnt how to manage taxi drivers w/ the helping advice of our landlord:

There are hundreds of riads in the Medina: no taxi driver knows about all of them… or even some of them… So if returning to your riad ask for the next gateway in the ramparts. The taxi driver will take you from the specified gateway as far as he can manage in the alleyways – meaning for us about 10 min walking from the nearest drop point to our riad: fine!

I’ve tried to picture some of the alleyways we walked. Attention: these are photos are taken during daylight – when it’s dark there are no shops, no stalls, nothing but ochre house walls w/ shutters & big doors (everything is shut down!). It becomes difficult to find your way because the alleyways look all alike… nevertheless it’s very interesting to walk them during daytime!

The souks sprawl from Djeema El-Fna mainly to the North. Most simple approach: souks are covered alleyways w/ shops & shops & shops… sometimes clustered along professions like carpet making/selling, coppersmiths, leather tanning etc. The souks are famous for their diversity, the haggling & bargaining, locals & tourists… You may get lost in time & space – especially because in the souks somehow all corners seem to look alike: don’t  panic! Just proceed & you’ll end up either on Djeema El-Fna or near Ali be Youssef Medersa at the Northern gateway or… You cannot get lost! 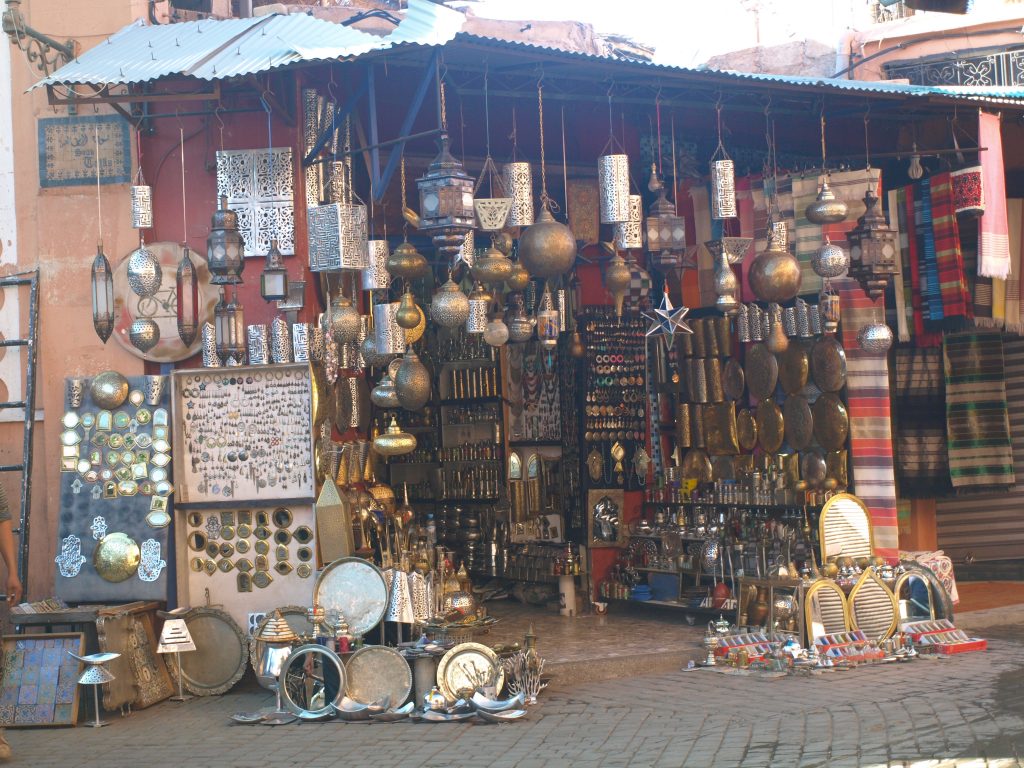 By the way: Did I mention that French is 2nd language in Marrakesh resp. Morocco? Be prepared because all menus are in French (& only sometimes in English…).

Once in a while you’ll need a rest: the cafés are excellent especially when succeeding in capturing a front row table on a “Terrasse Panoramique”. Just order some mint tea (really refreshing!), relax & watch the crowd… (Don’t mistake mint tea (fresh mint leaves infused in hot water!) for our home version of peppermint tea bags…)

Marrakesh & spices: it’s all about spices (& trading spices) since the very beginning! In the Medina there are lots of stalls & shops presenting their spices & herbs (& fresh mint leaves!) & nuts & dried fruit…

What did we eat?

Well – of course – there’s the French heritage meaning you’ll get premium baguette, fresh croissants, delicious pain de chocolate… all over the Medina at lots of bakery stalls. In addition there are small round flat breads (it’s the Moroccan style bread!) accompanying each meal.

The tajine is the main … dish? cookware? meal?…
It’s a deep earthen plate with a cone shaped cover/lid. You put meat & spices/herbs & vegetables (optional) on the plate, cover the plate, put the tajine on blazing charcoal & let it work for some hours: that’s the classic approach (I’m not sure if each Moroccan restaurant/café manages a tajine this way!).

The result is great:

Tajine means always a spicy stew-like meat dish you’ll enjoy together w/ a Moroccan bread. It isn’t a real big serving – you can enjoy a tajine dish anytime from noon to midnight. However, be careful: tajine is always hot – sizzling, bubbling, hot! (The egg of the kofta dish is frying in the tajine just when being served.)

I learned that some of the combinations are traditional – & I think there are more adjusted to tourists’ likings.

Our riad offered a 3-course dinner each evening & we enjoyed  once in a while. I was especially fond of the dessert because it was always a delicious very French style dessert!

This is a colorful tajine we returned home as memento. (I don’t think we’ll use it for preparing tajine dishes. Btw: we don’t own a charcoal BBQ set!)

Marrakesh is a very modern city with a great & large old town – a living old town (aka not only nicely restored buildings & picturesque alleyways & lots of arts & crafts shops, but home to thousands of locals).  When roaming the alleyways of the Medina you may think you’ve travelled back in time for 50 years, for even 100 years – if there were no motorbikes, no smartphones, no satellite dishes around…

…& once again: our travel companions!*