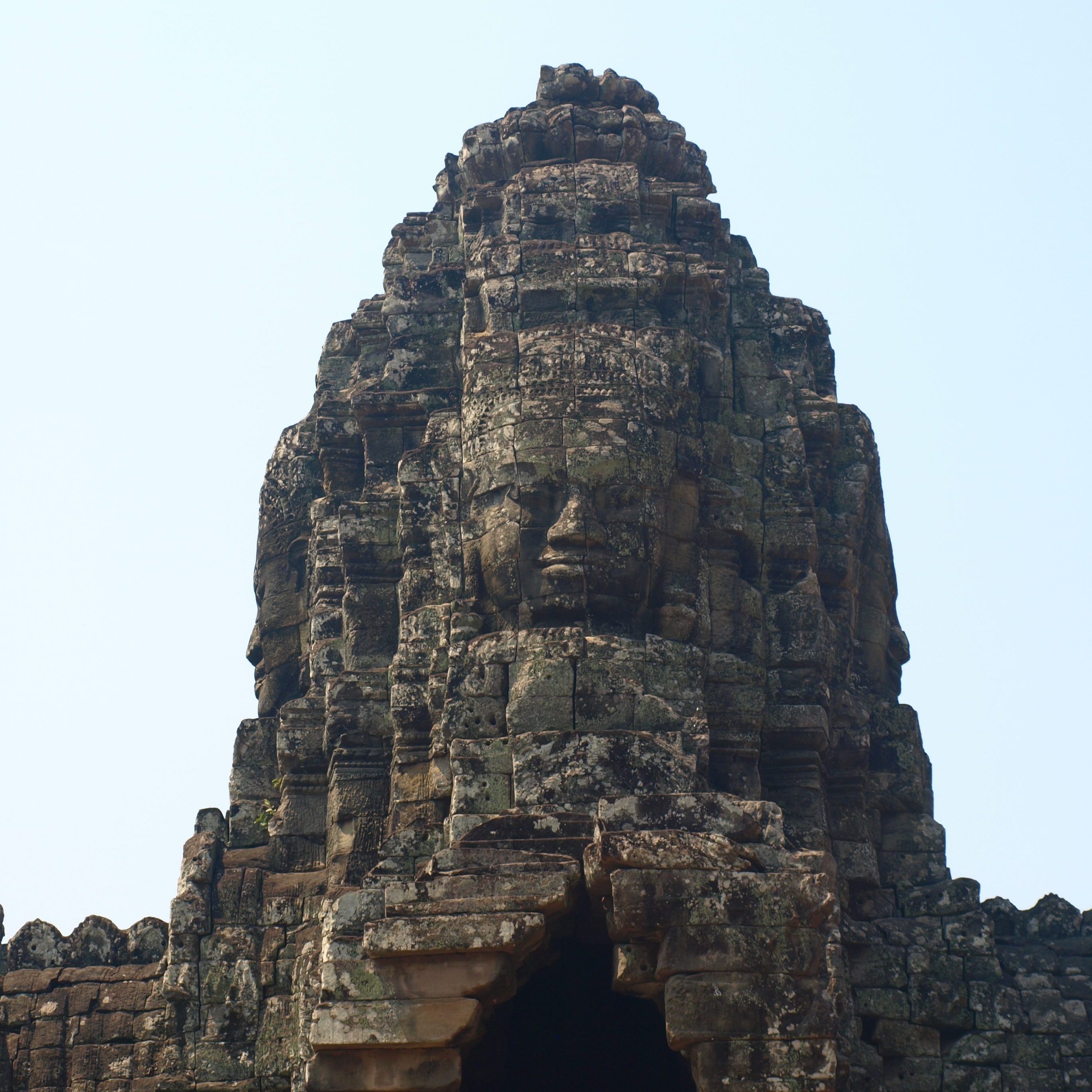 Leaving „Megalopolis“ Bangkok we entered Cambodia & stayed in Siem Reap, the city near the Angkor area where you’ll find the largest religious site worldwide surrounded by lots of temples… ruins… more ruins… Sometimes we felt like diving into an archaeological adventure – well: not like Indiana Jones of course, but there were some sites & moments…

Beginning with our reliable travel companions*:

Compared to Bangkok’s golden Buddhas there are only Buddhas made of stone in Angkor as well as stony temple dancers, stony guardians & lot of stony Hindu gods & goddesses. 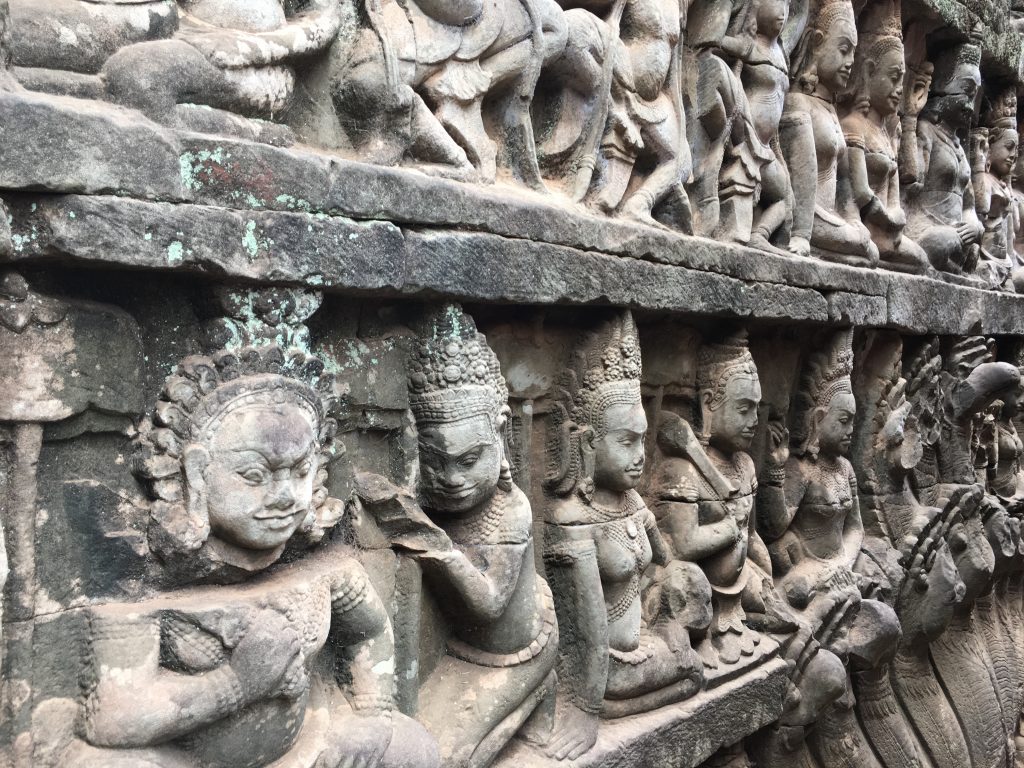 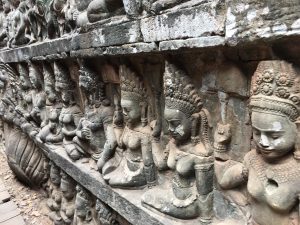 In Angkor there are lots of Buddhas to be found: even after the decline of the Khmer empire Angkor was inhabited & Buddhist monks & nuns lived in – most of – the temples. So let’s have a closer look at Angkor’s Buddhas! 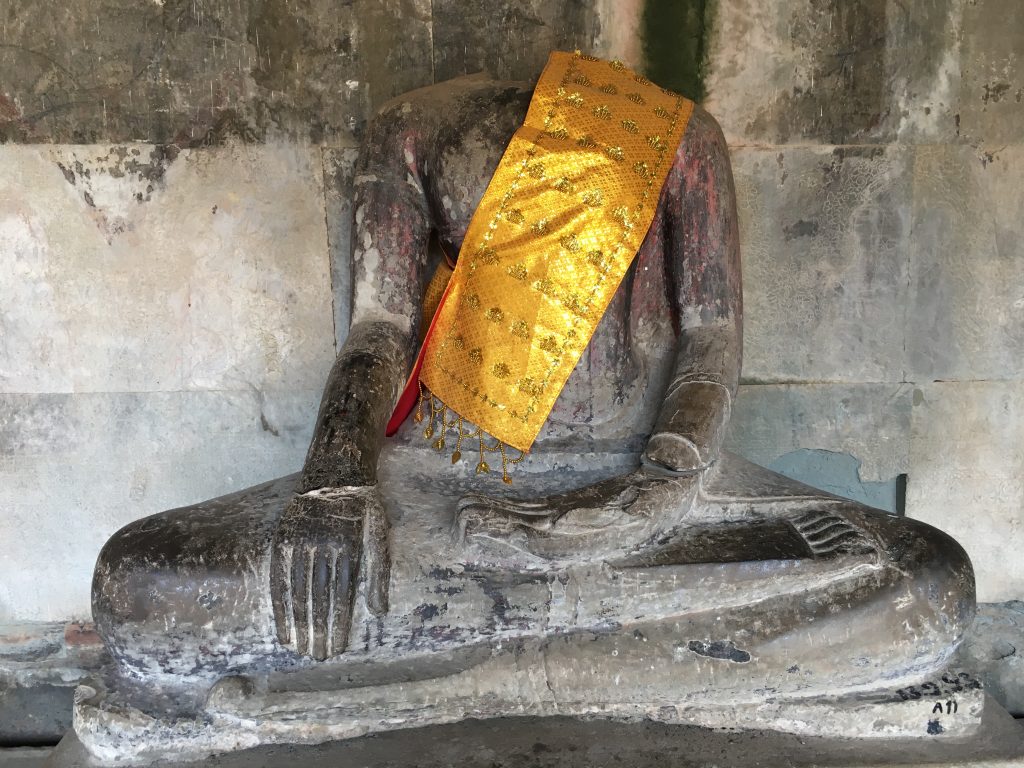 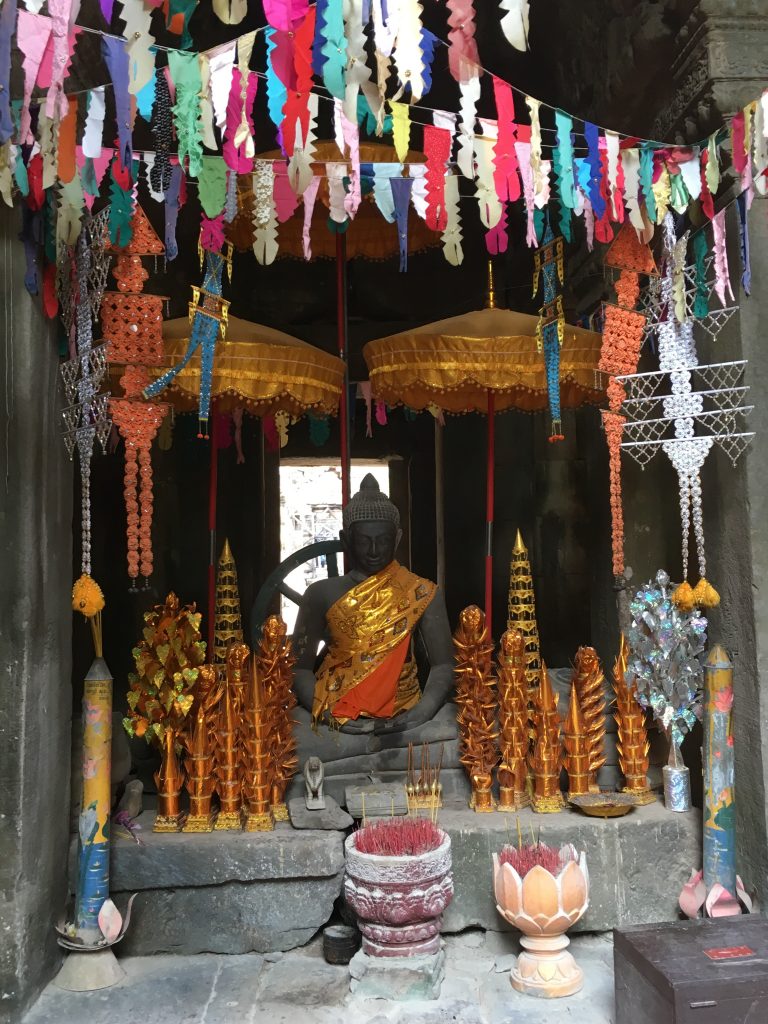 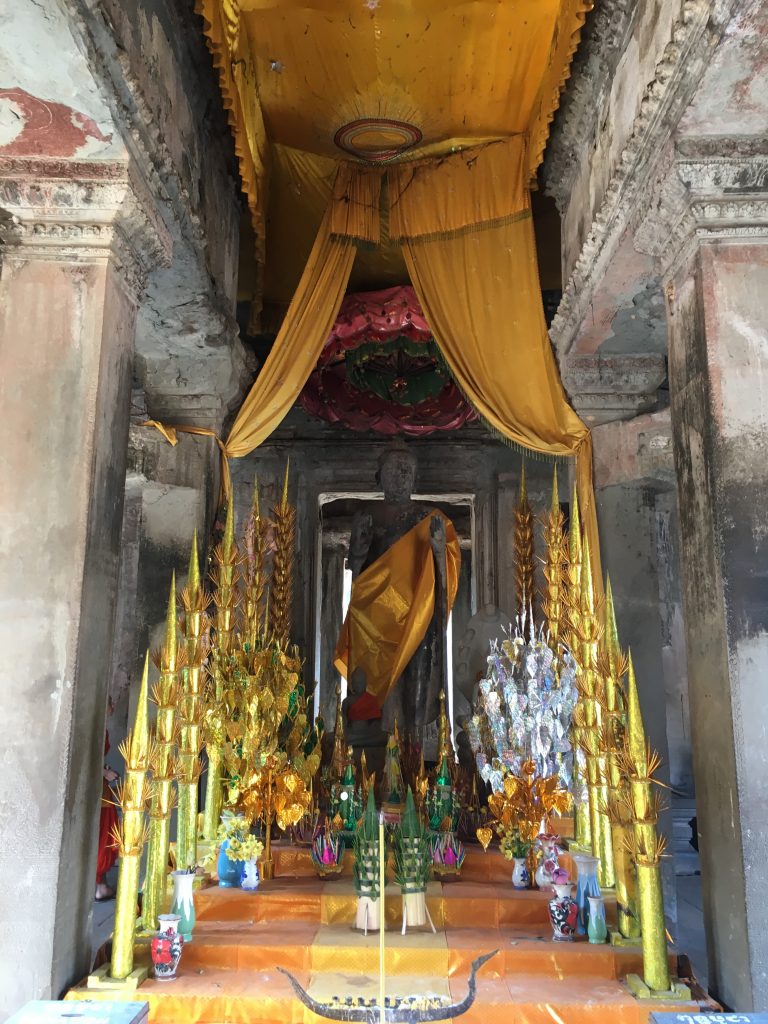 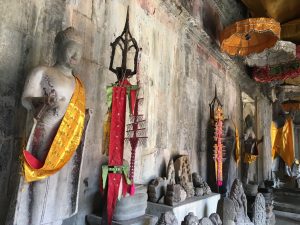 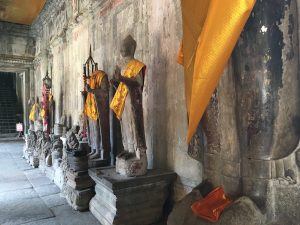 All that remained from Angkor’s heyday is made of stone. Well… the only buildings made of stone back then were temples & monasteries always erected in the same compound. Any buildings & statues made of wood (the rulers’ palaces, the houses of more or less wealthy people etc.) are long gone in the hot & humid Cambodian climate. (We only know about them by historic reports written by foreign visitors & travelers & ambassadors.)

Angkor’s centre covers about 200 km² w/ about 1.000 holy sites (mostly ruins) while „Greater” Angkor was about 1.000 km². During the Khmer empire up to 1 million people lived in this area. 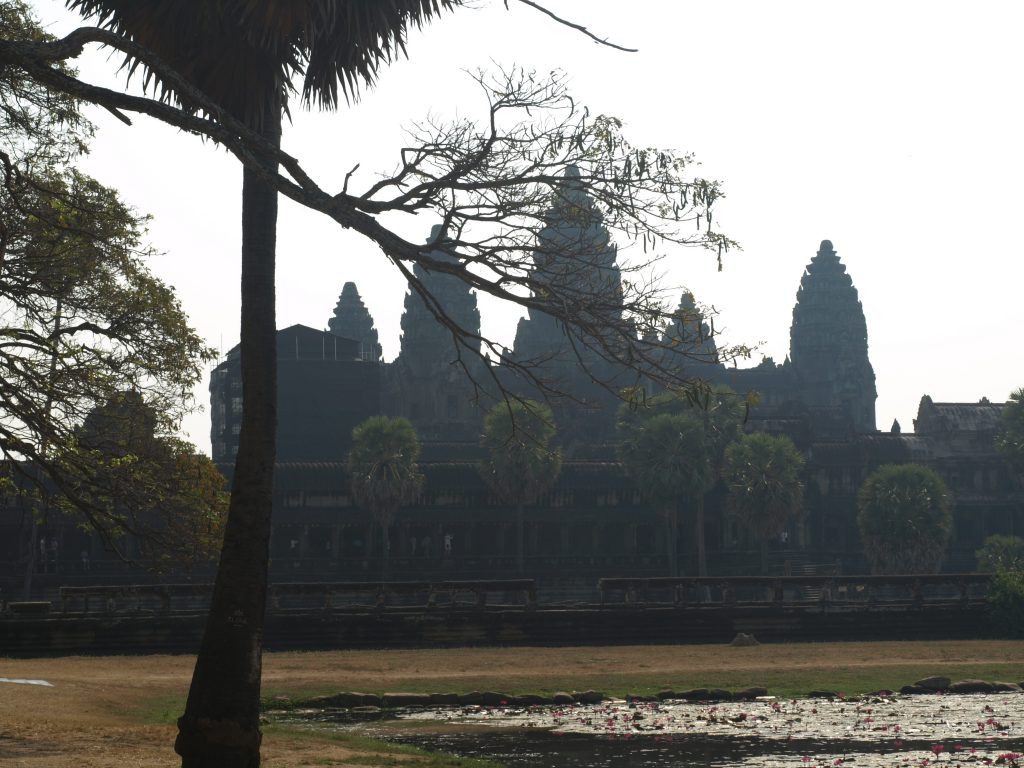 For the record:
Angkor Thom was the capital of the Khmer empire. Temples like Bayou & Baphuon are inside the walled city. Also in Angkor Thom only temples made of stone & religious sites like the large terraces survived.
… & of course this is only a short list of all the temples & ruins that are scattered in the Angkor area. 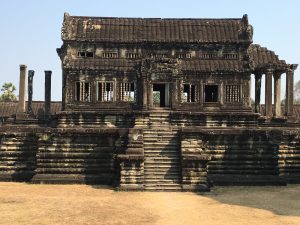 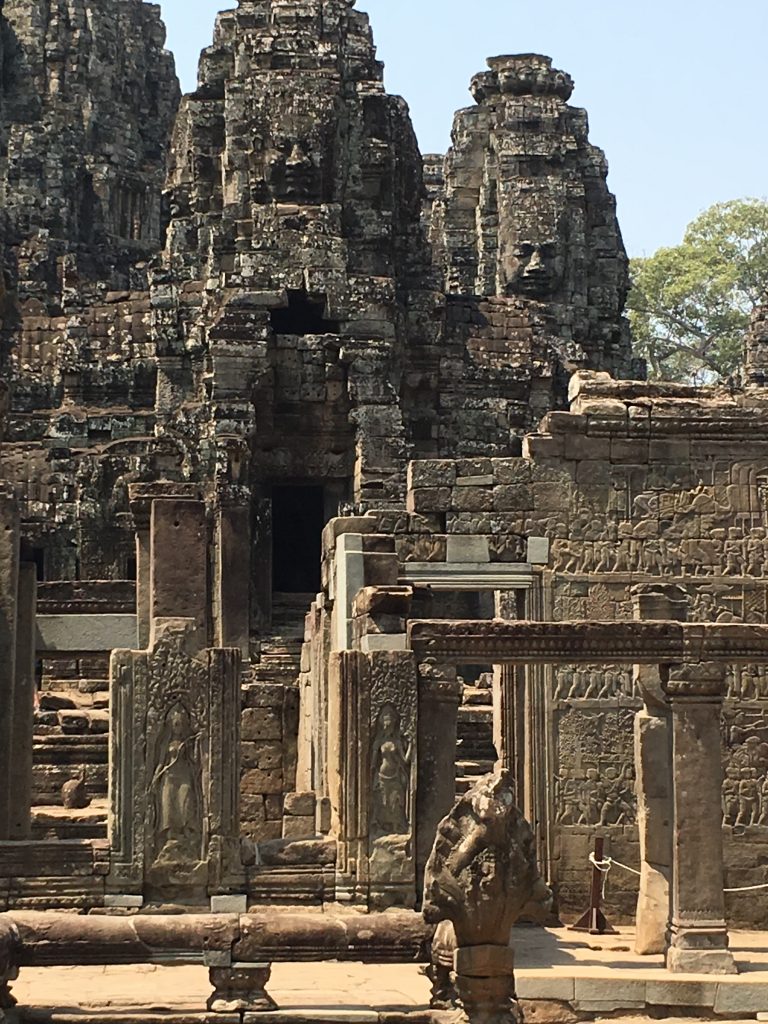 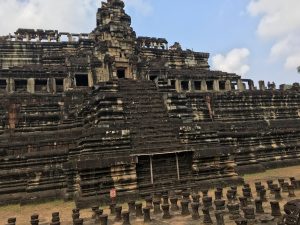 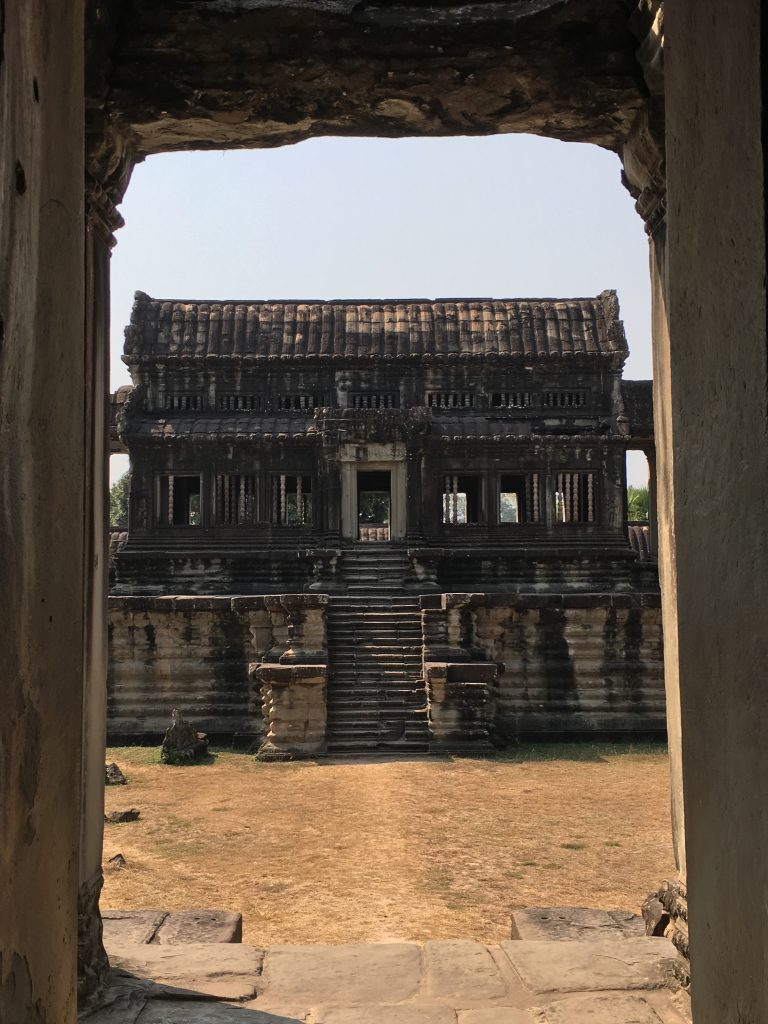 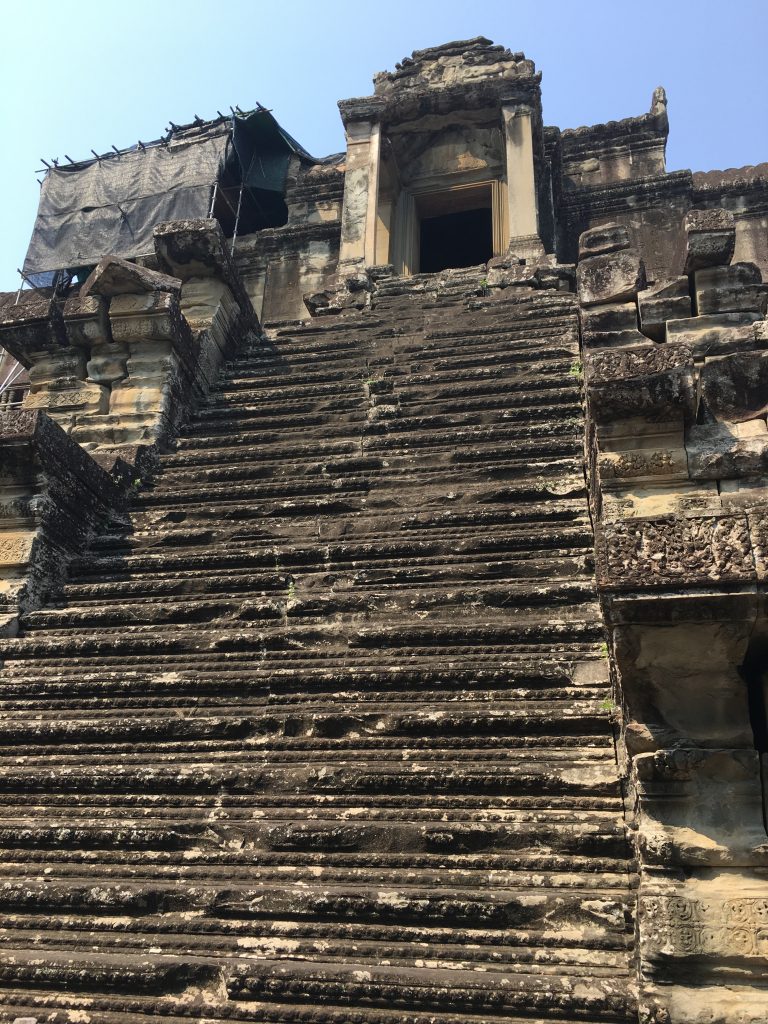 …& there are „endless“ colonnades & rows of windows: 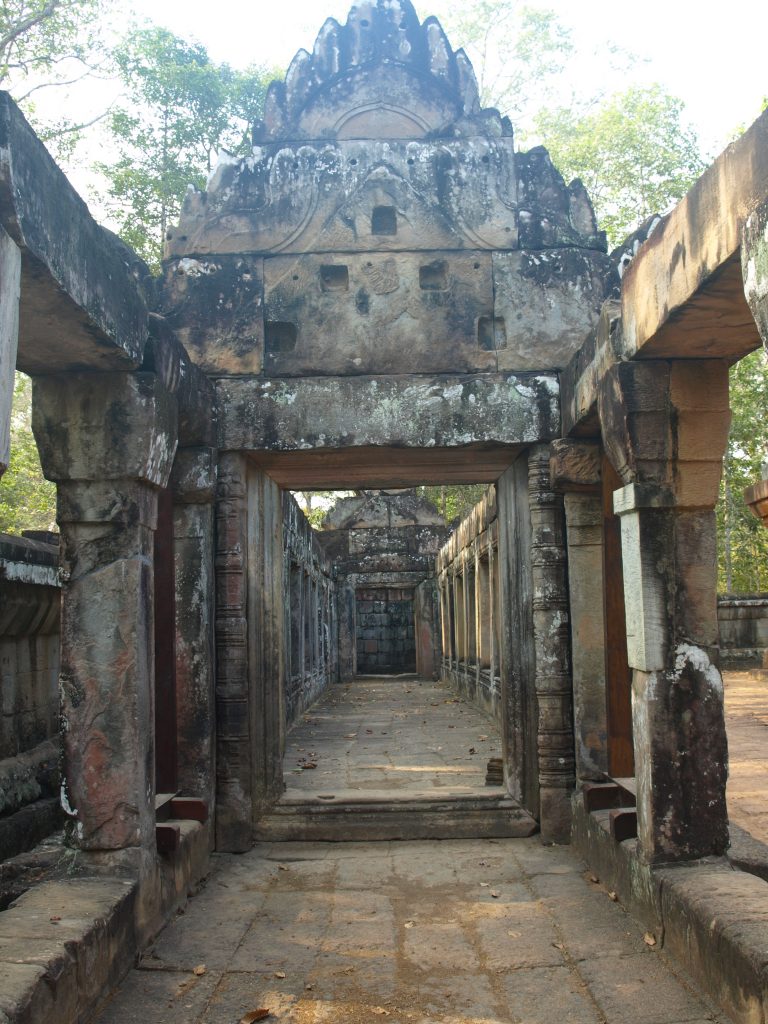 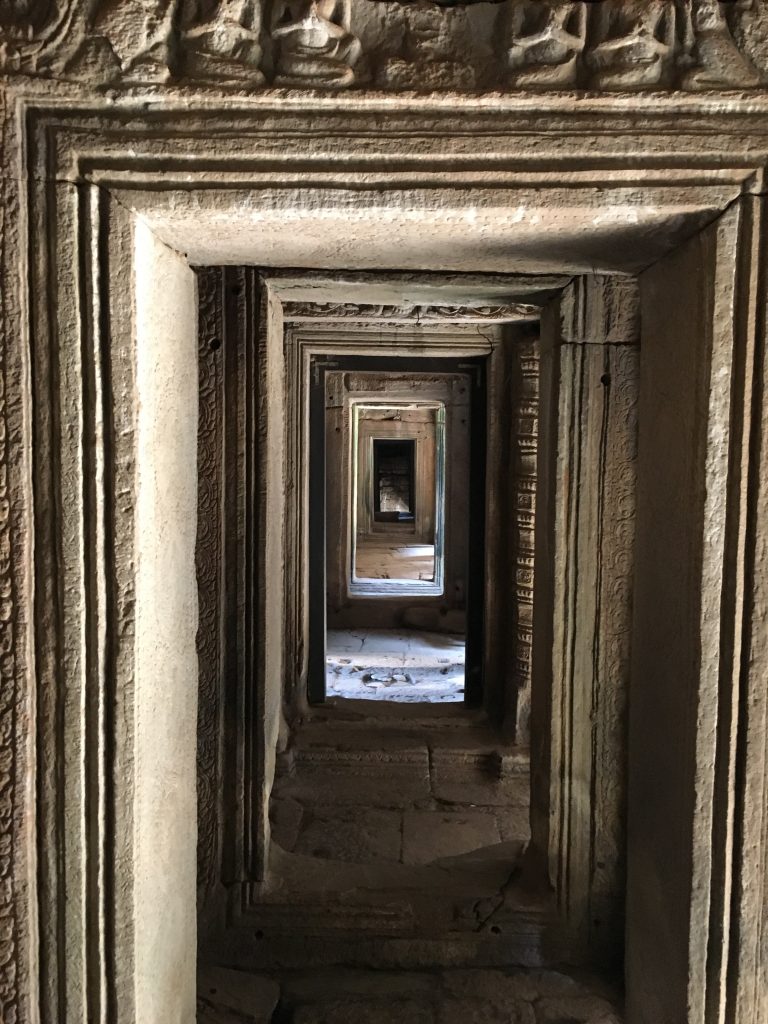 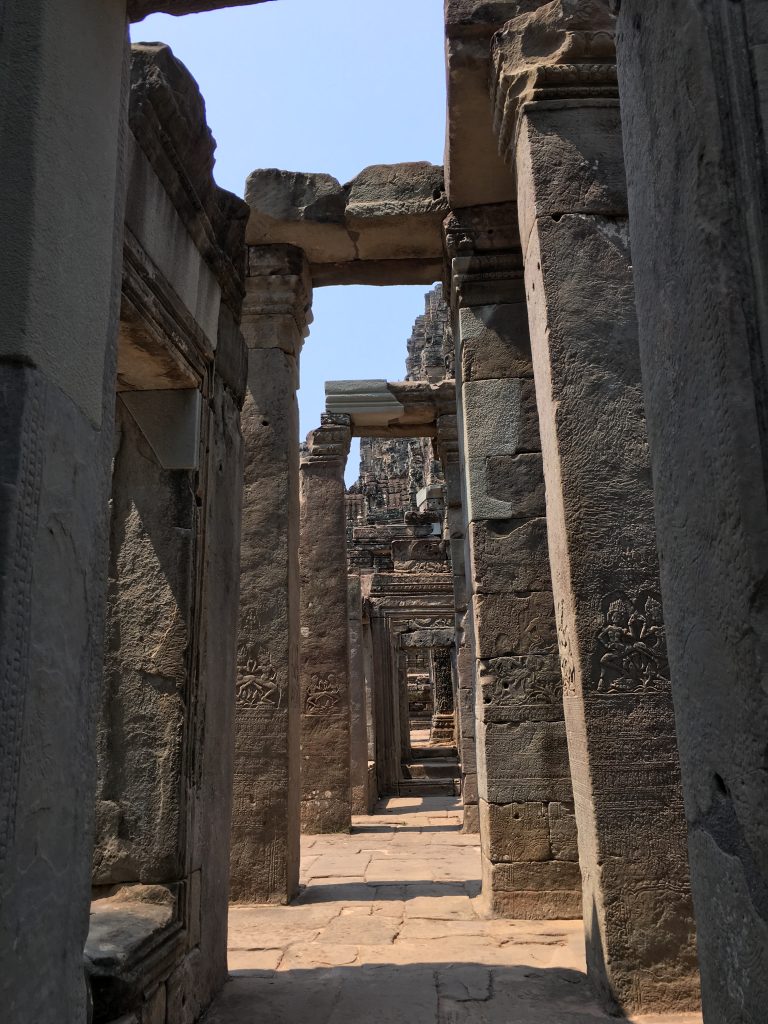 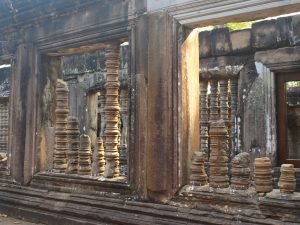 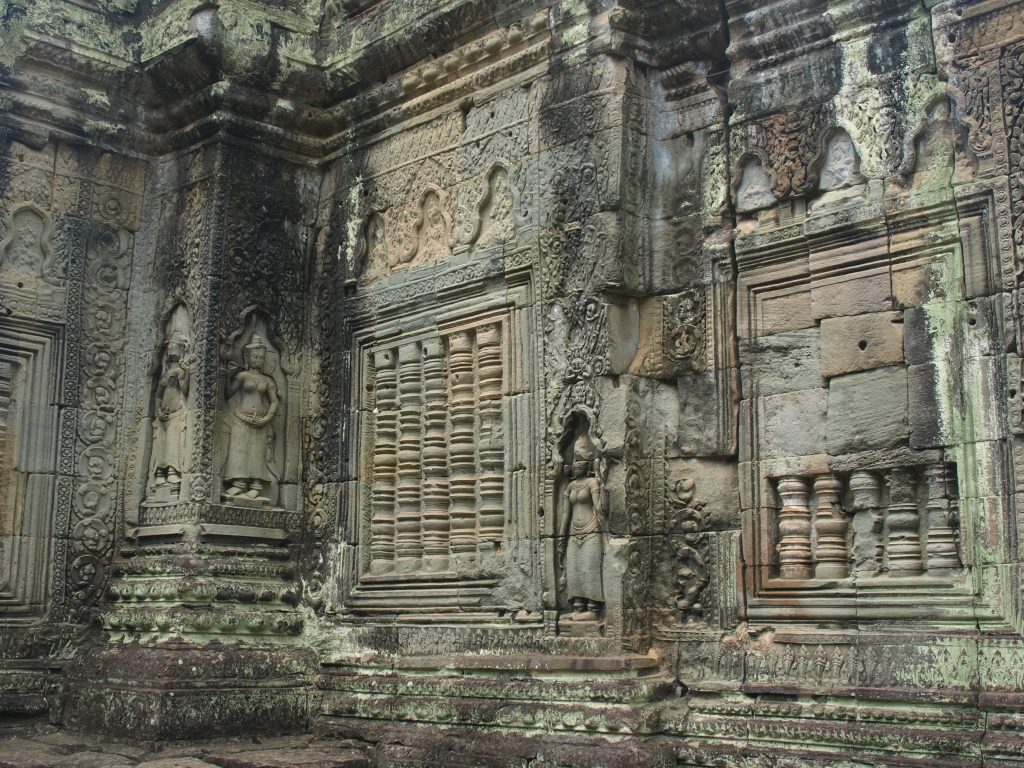 Before furthermore admiring the walls filled w/ reliefs of Hindu gods & goddesses, of epic battle fields & lots of temple dancers there is Ta Prohm (& some similar sites…) where you really get near to an Indiana Jones feeling… 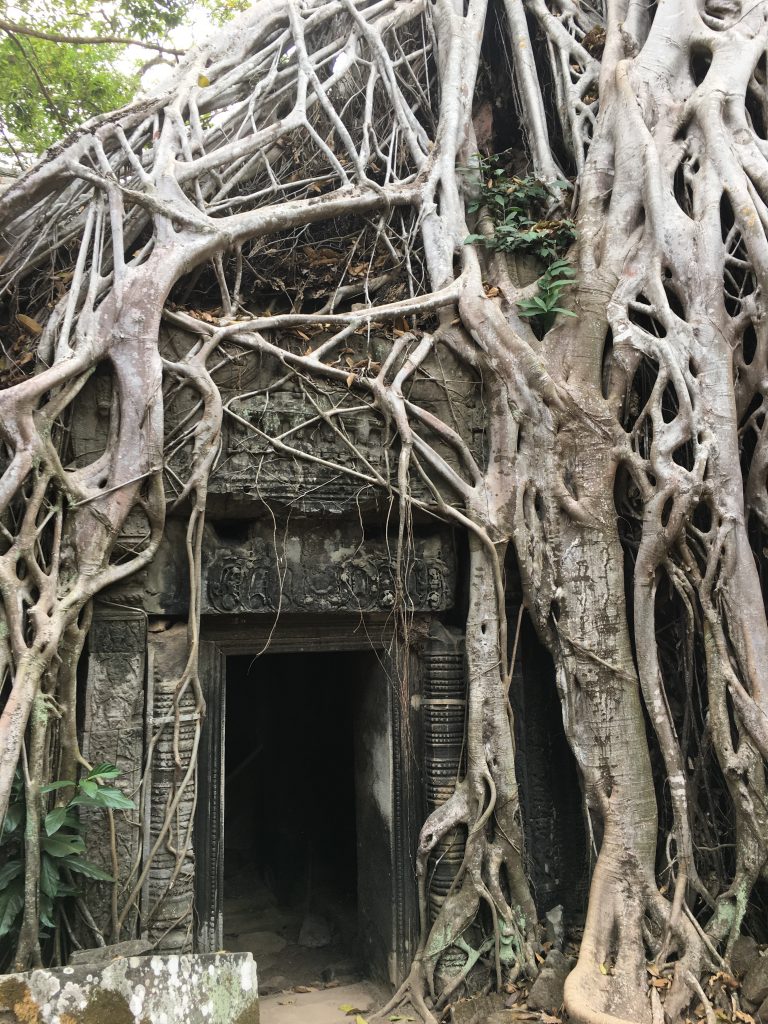 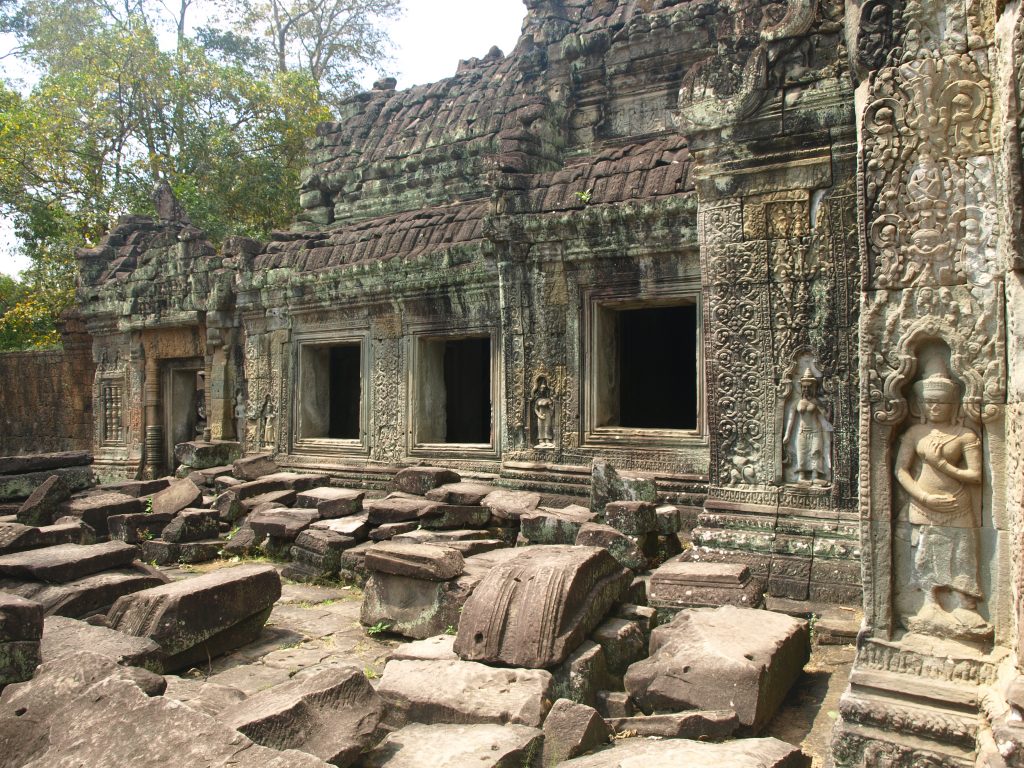 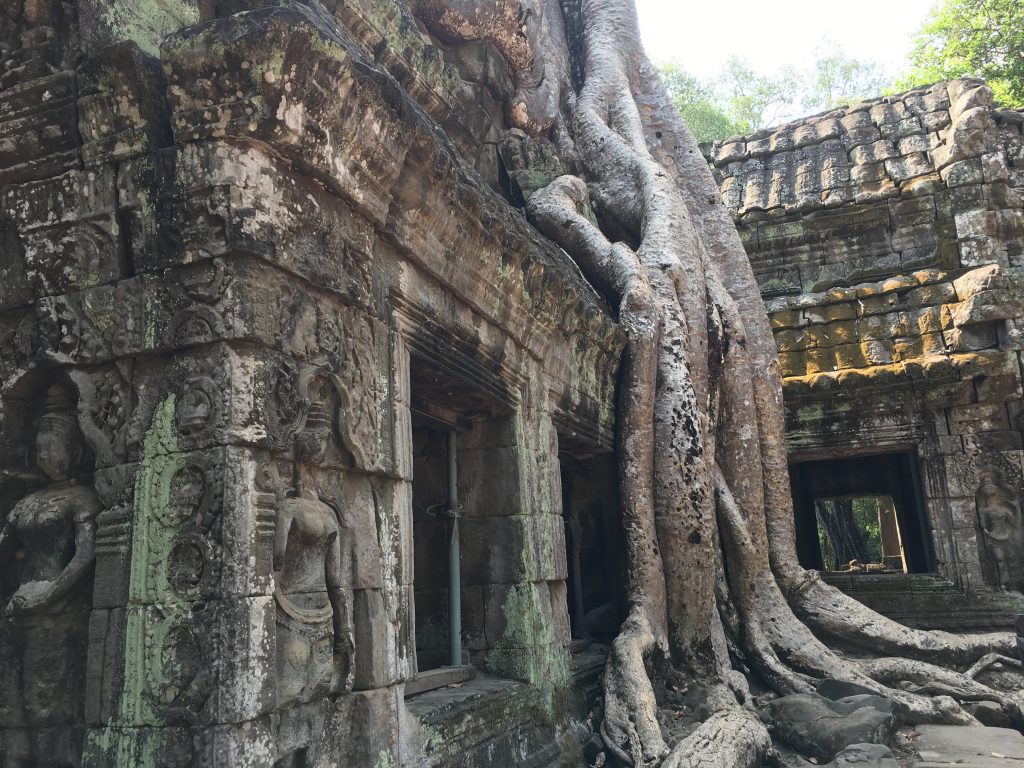 For the record:
The scenery looks somewhat familiar to you? Yes: it’s „Lara Croft: Tomb Raider“. Parts of the movie were shooted exactly at Ta Prohm! (Any local will tell you…)
(You remember the movie w/ Daniel Craig – still in his pre-007 era – playing a “tomb raider“: basically a good guy, but sometimes a little too fond of money… doesn’t matter: he survives!)

Coming now finally to the reliefs: 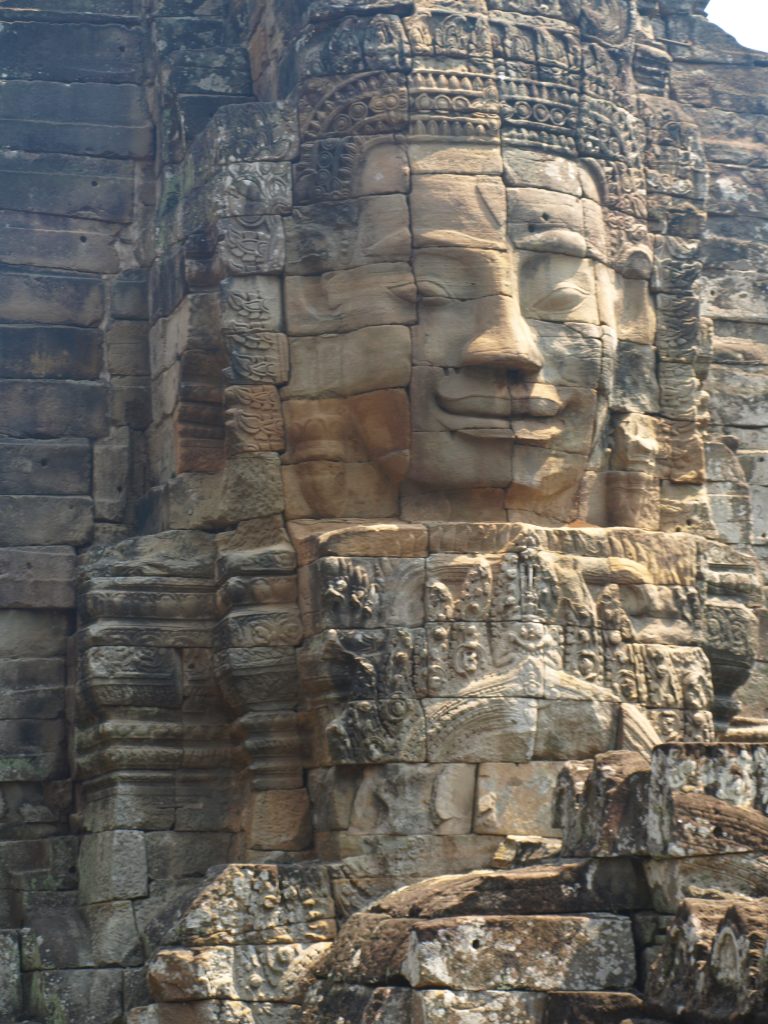 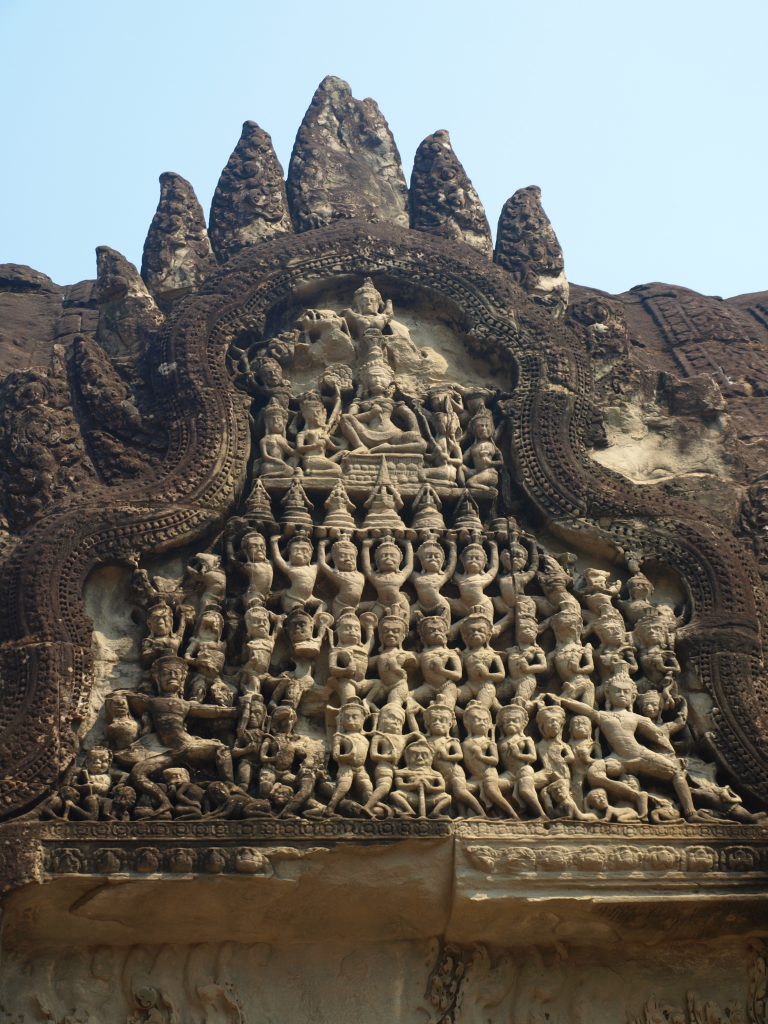 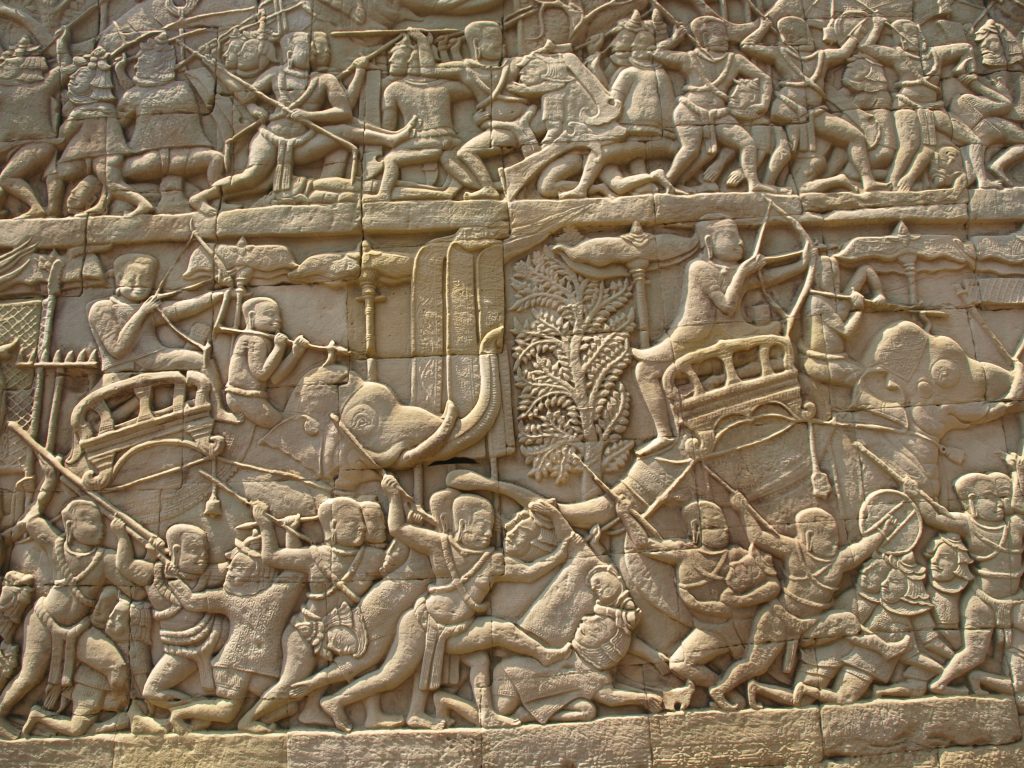 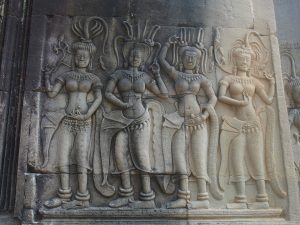 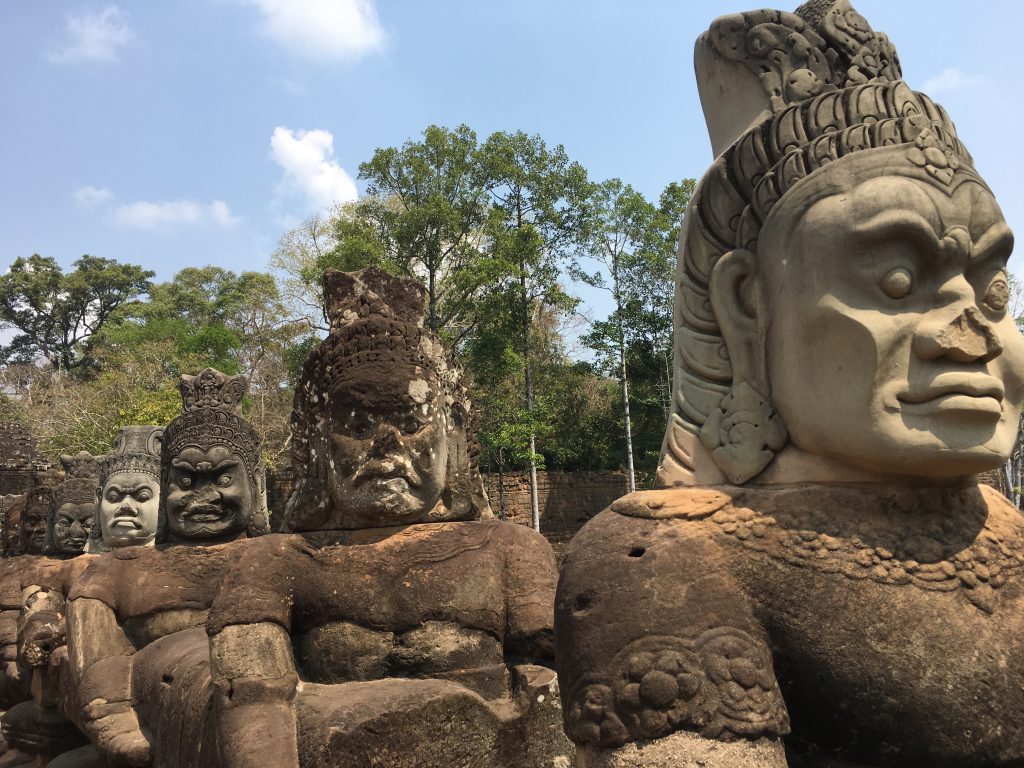 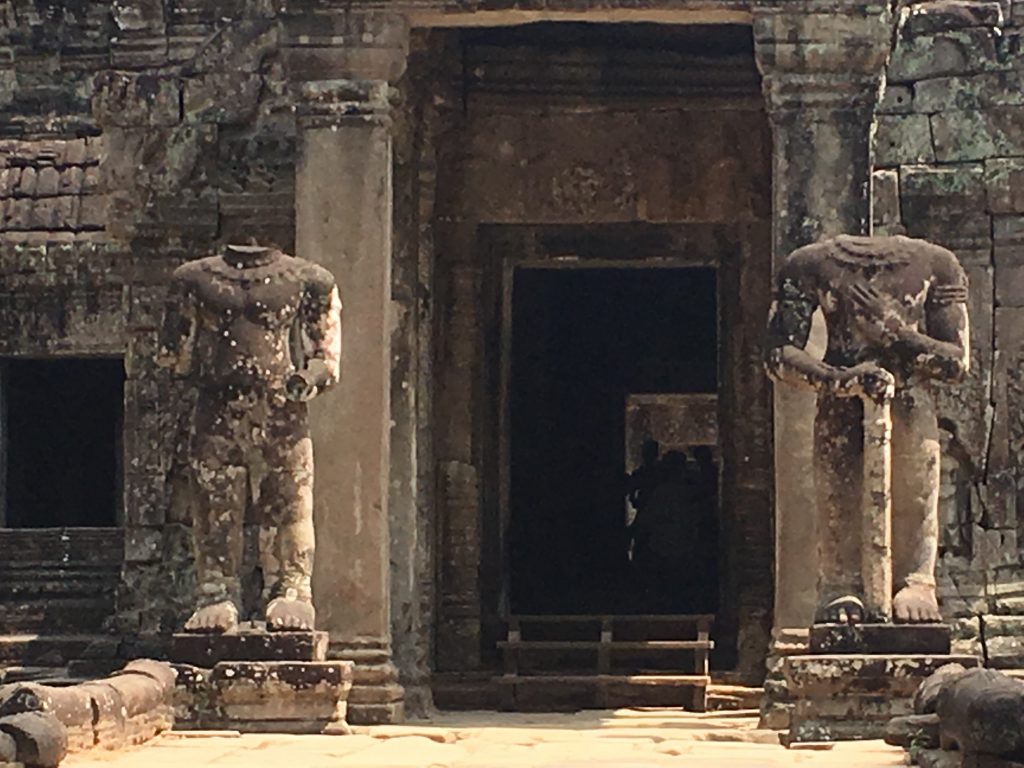 …& there are lots of photos I’d like to add (we didn’t cover Angkor Thom’s terraces & the water basins, the walls of the walled city, more guardians, „the churning of the ocean of milk“… & Siem Reap…), but blog space is limited!

We had an exciting & relaxing stay in Siem Reap. Each early afternoon when coming home from Angkor trips we indulged in swimming in the pool & recovering from the heat & walking & climbing the stairs…

We also visited the Angkor museum in Siem Reap: it was a brilliant complement to our Angkor experience! Not only the exhibition of lots of fine & well preserved statues & reliefs you may enjoy in a cool museum atmosphere, but also some overview models of temples (especially Angkor Wat) give you another impression of the Angkor vastness & the allover symmetries! (There is also the „Hall of 1000 Buddhas“ which you shouldn’t miss!)

Almost near the end: the Buddha altar in our hotel… 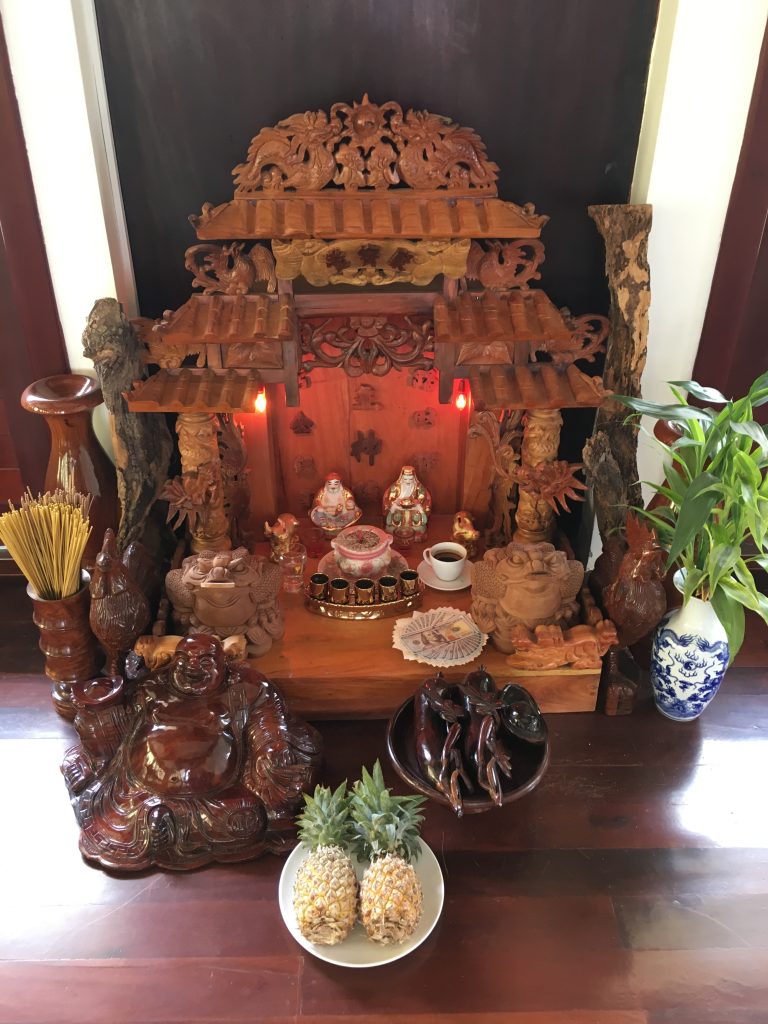 You’ll find such altars everywhere in Siem Reap inside & outside… (it’s the same in Bangkok by the way).

Coming now nearer to the end… I call him the „Good-bye Buddha“! 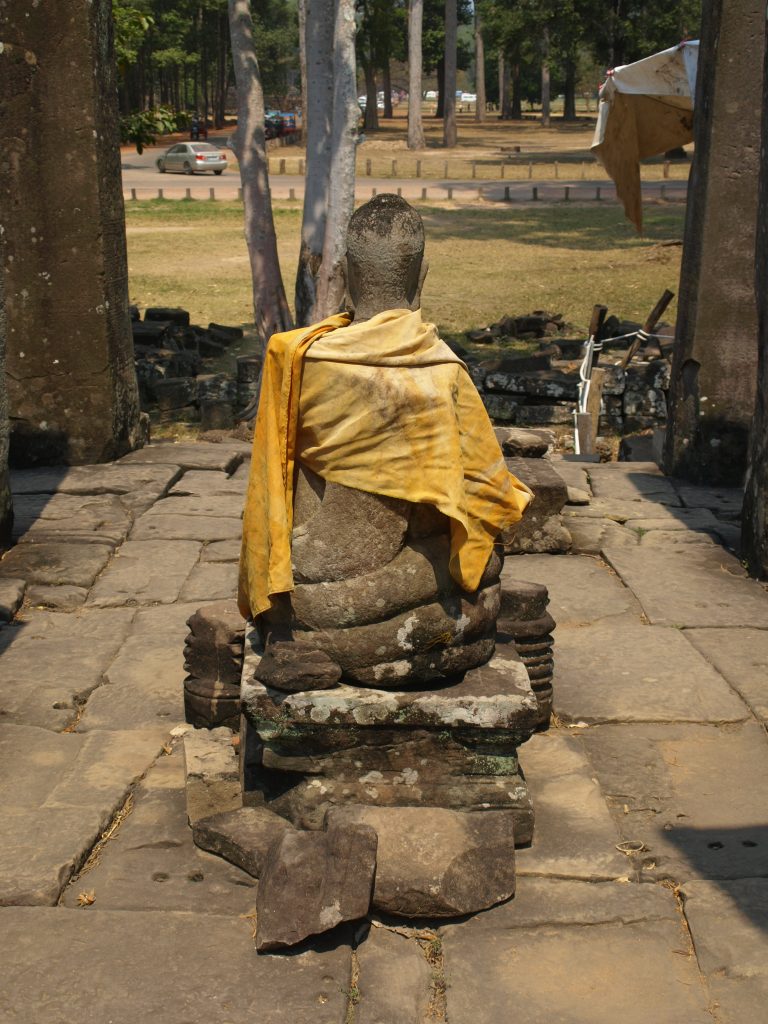 One last word:
Our stay in Cambodia was restricted to Siem Reap & Angkor – this time. However, we’re sure to return to Cambodia soon… Maybe for a trip from Vietnam crossing Laos & ending up in Cambodia.