April, May & June: it’s asparagus season (let’s say… from mid/end of April until mid of June…)! Next to the classic asparagus approaches there’s the unique opportunity to create a delicious asparagus salad during this limited time slot.

My better half & I, we love green asparagus!

Each spring we’re longing for the first fresh asparagus & during the next weeks we indulge in its tasty flavour, its crispy stalks & tender heads almost melting in your mouth.

We like asparagus the classic way for lunch or dinner: asparagus boiled only some minutes (attention: don’t overcook!) accompanied by fresh potatoes, hollandaise sauce & tender ham. Sometimes we also do the roasted version in the oven: asparagus sprinkled with olive oil, salt & pepper, maybe some cherry tomatoes strewn around, Mediterranean herbs…

Today, however, I’d like to present a fresh asparagus salad with tomatoes & parmesan cheese…

We don’t need need too many ingredients: 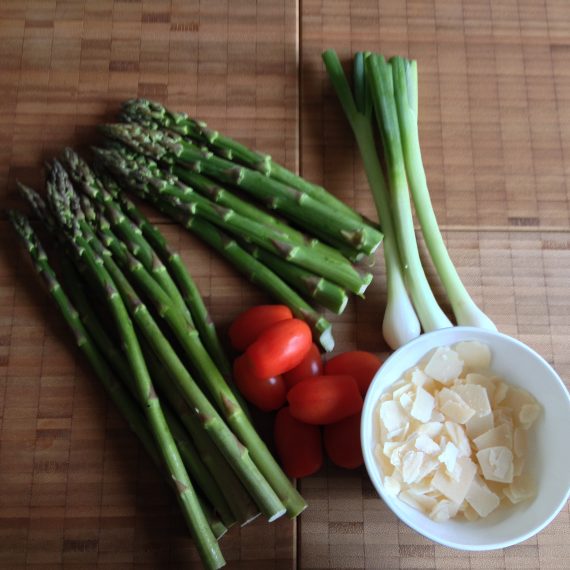 Trimming green asparagus is quite easy: take an asparagus stalk, grip the end & break it off. The end is firm, woody, fibrous… you shouldn’t eat it: it definitely spoils the meal. You realize rather soon that there is some sort of natural breaking point at about ¼ of the stalk from the end. (The photo above shows  un-trimmed as well as trimmed asparagus.) Just discard the broken ends. Good news: the remaining asparagus stalk is ready for consumption i. e. further preparation – no more waste for the compost pile.

For the record:
There’s also WHITE asparagus. When dealing with white asparagus you’ll definitely have to peel each asparagus stalk… My recommendation: leave this to chefs in restaurants!

Next step: cut off generously the asparagus heads & leave them for later. The rest of the stalks should be cut into bits of about 2 cm. 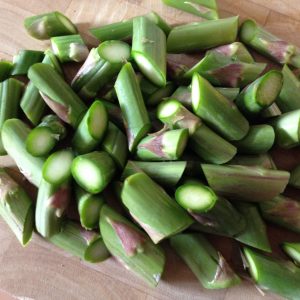 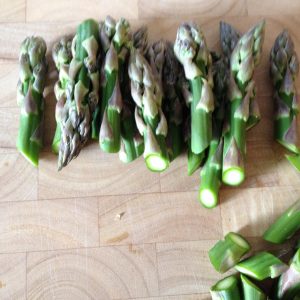 The spring onions have to be chopped. Now the before-cooking-preparation-phase is finished.

In a pan heat some olive oil & fry the spring onions & the asparagus bits for about 10-15 min.

In the meantime chop the tomatoes, wrap the mess in kitchen roll paper & press & squeeze & crush with your hands above the sink: lots of liquid will ooze out… lots of the pits will also stick to the paper when unwrapping… It’s just fine: for the asparagus salad we’ll need the tomatoes, but not too much liquid or jelly or pits.

(It looks really a little unsavory…)

The asparagus heads – of course – are spread on top.

April, May & June: it's asparagus season (let's say... from mid/end of April until mid of June...)! Next to the classic asparagus approaches there's the unique opportunity to create a delicious asparagus salad during this limited time slot.

Salt: I used my mix from salt & dried Mediterranean herbs for the salad. The herbal touch fits to the fresh basil.

Tomatoes: If you like you may use some more tomatoes, but don't overdo - it's an asparagus salad, not a tomato salad!

Asparagus heads: as mentioned before you can reduce frying time by mixing bits & heads together.

You can enjoy the asparagus salad at once (still warm!) or leave it in the fridge for at least 1-2 days.

You’ll optimize the overall flavour when mixing all ingredients of the salad as long as the asparagus is still “warm”. You can eat it at once accompanied by some fresh baguette…. simply delicious.

The Businesswoman with too many office hours thinks