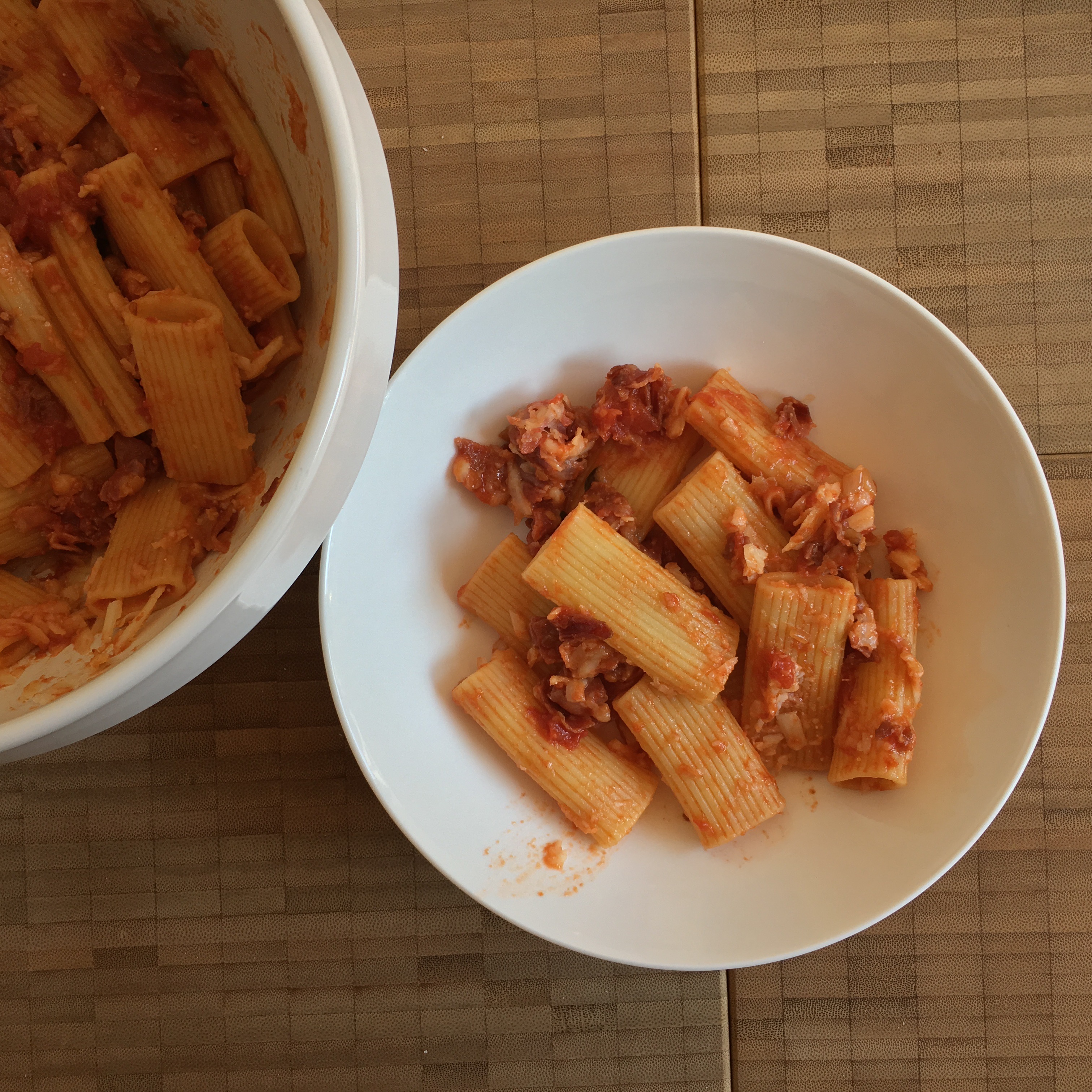 What means all’ amatriciana?

Wikipedia says it’s simply pasta w/ tomatoes, bacon & pecorino from the Italian town of Amatrice – made w/ spaghetti.
My travel companion wrote that it’s one of the distinguished pasta dishes of Roman cuisine… made w/ bucatini.

During our Rome adventure I had bucatini all’ amatriciana for dinner: it was delicious!
Back home I decided to give it a try in my kitchen… 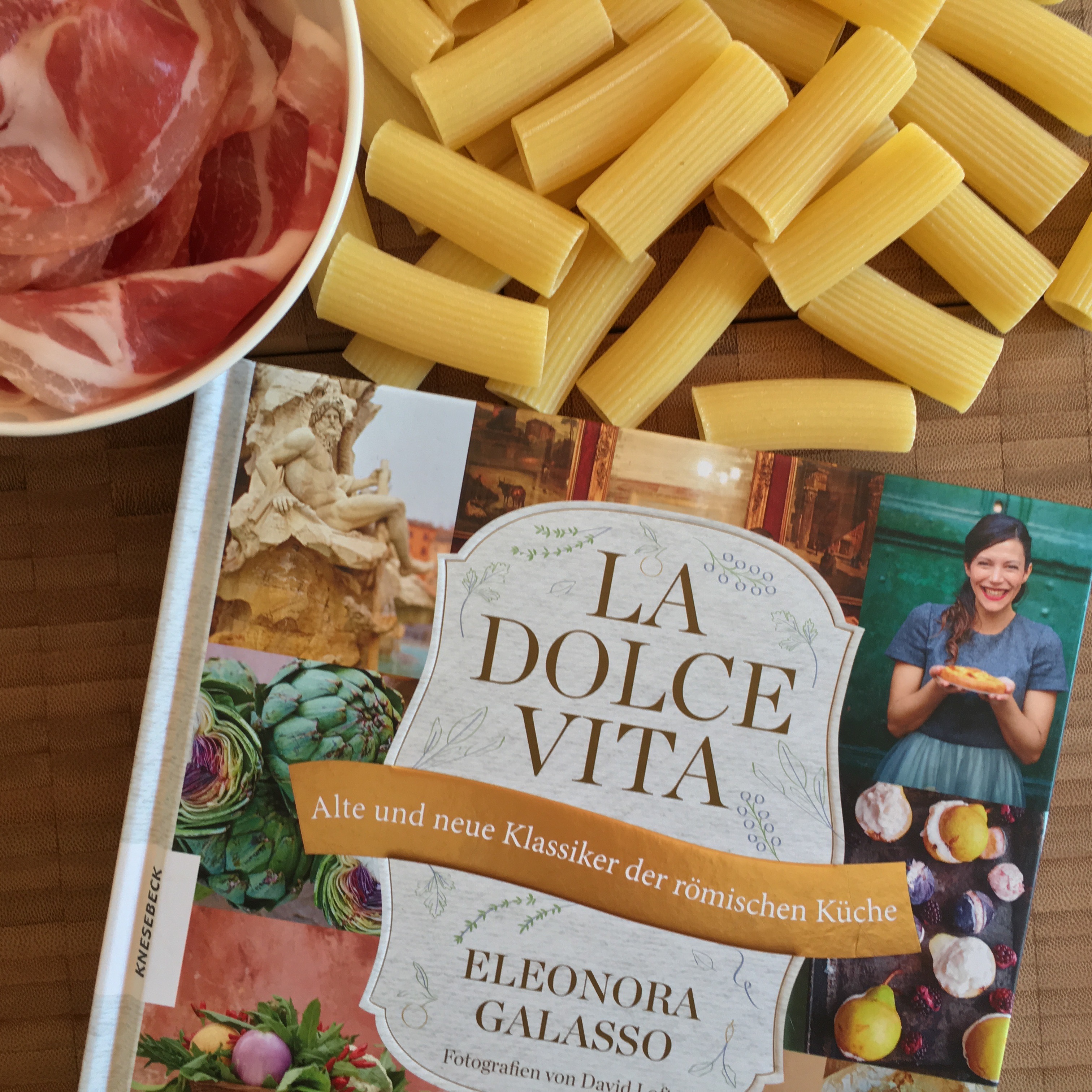 …which lingered in my kitchen for some months!

Of course it delivered a recipe for pasta all’ amatriciana.

So I started w/ its recipe… 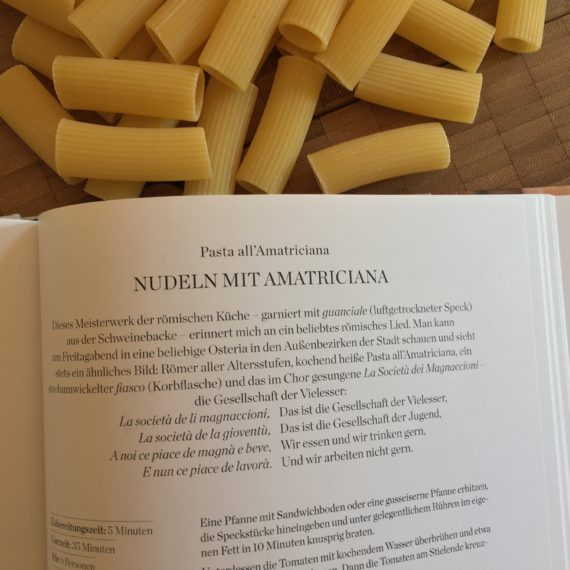 Some changes had to be made from the very beginning:

So we finally have: 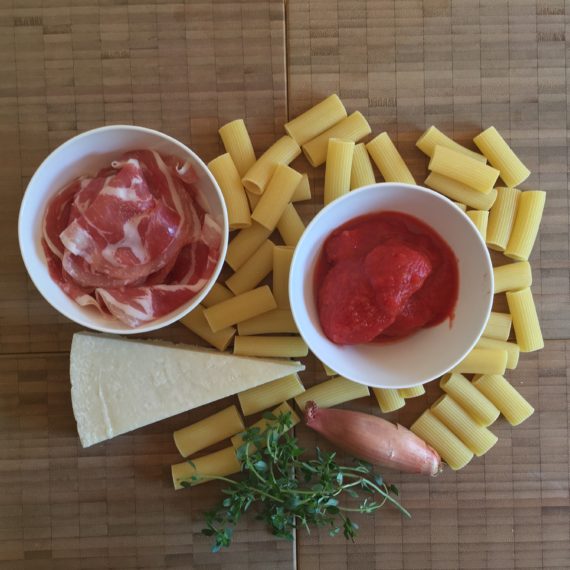 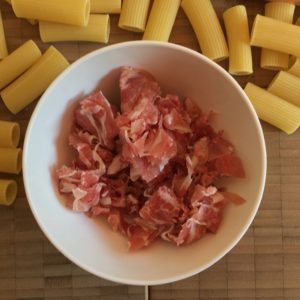 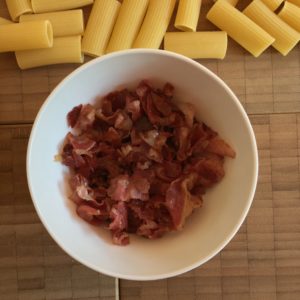 Step 2: Chop & fry the shallot in some olive oil together w/ the fresh thyme.
(You may use the same pan as for the bacon. Don’t be stingy w/ the thyme.) 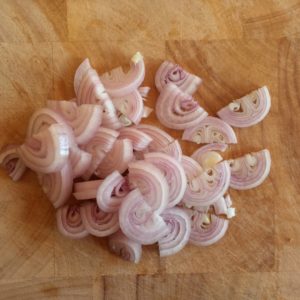 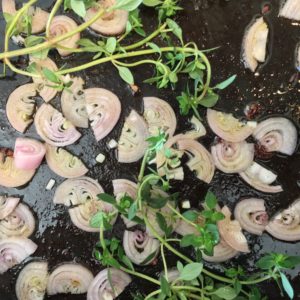 Step 3: As soon as shallots get soft add the tomatoes & mash them. Add some sugar & a pinch of chili (either ground chili or chili flakes or a crushed dried chili pepper (w/o the pits!)).
Then simply let it simmer for a while.

Step 4: Cook the rigatoni. While cooking & the sauce is simmering grate the pecorino.
(If the sauce seems to become too dry just add 1-2 tbsp of pasta cooking water.) 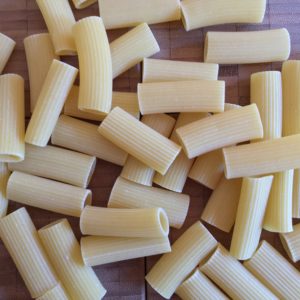 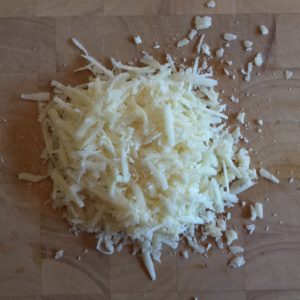 Step 6: Drain the rigatoni & dump them in the sauce. Mix well. Add about the half of the crispy bacon. Mix well. 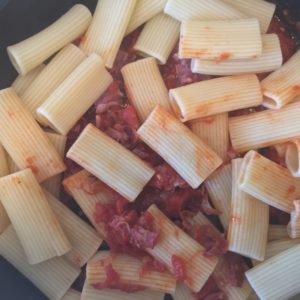 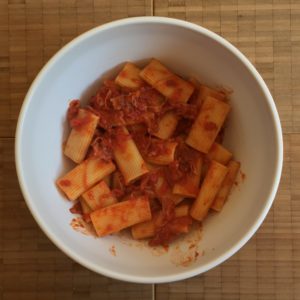 Step 7: Transfer the mess in a bowl. Add the pecorino & mix well. The pecorino starts melting in the hot mess – immediately. 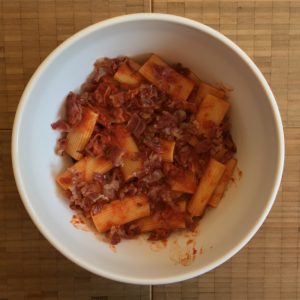 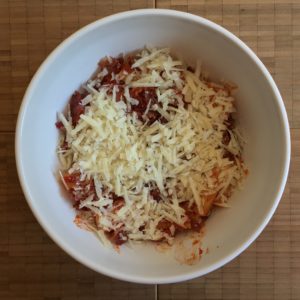 At this moment you may think that it seems a little dry… however, each rigatoni is full of tomato flavour, the melted pecorino sticks around. There is no soup-like sauce – & the dish doesn’t need a soup-like sauce!

Another point: I didn’t use any salt or pepper. The salt comes by the pancetta as well as the pecorino. Pepper is not recommended by the recipe – I think you don’t need it.
(Ok – if you are a salt afficionado or afficionada you may add some salt… maybe also some more chili, however, this dish isn’t meant to be hot & spicy!) 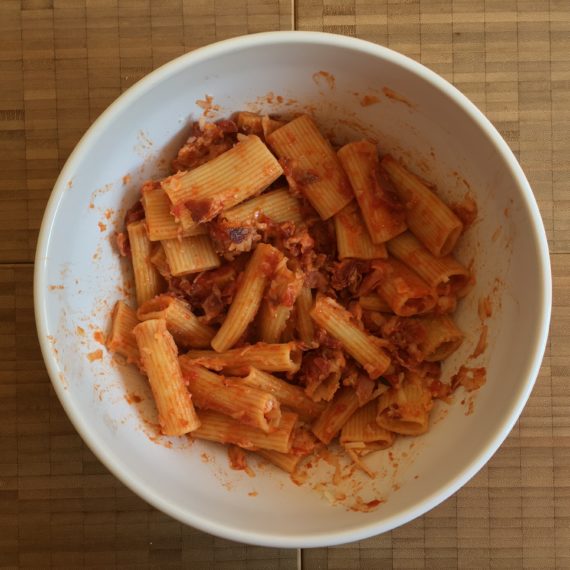 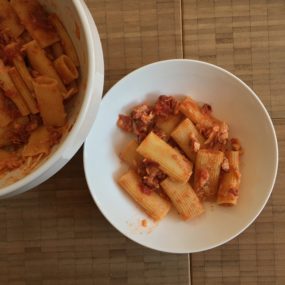 Print Recipe
eleonora’s pasta all’amatriciana
I tried one of the recipes in Eleonora Galasso’s cookbook on Roman cuisine. "Pasta all’ amatriciana" is a classic Roman dish I had for dinner when we were in Rome in June. It’s quite easy to prepare - afterwards your kitchen is filled with delicious flavours... Italian flavours!
Prep Time30 mins
ingredients:
how to:
Notes
Prep Time: all the chopping, the frying, the simmering, the cooking... Pancetta: you may also use South-Tyrolean bacon. You may store leftovers in the fridge & reheat in the microwave, however, the crispiness of the bacon vanishes - although no flavours vanish!

Let’s talk about the cookbook! 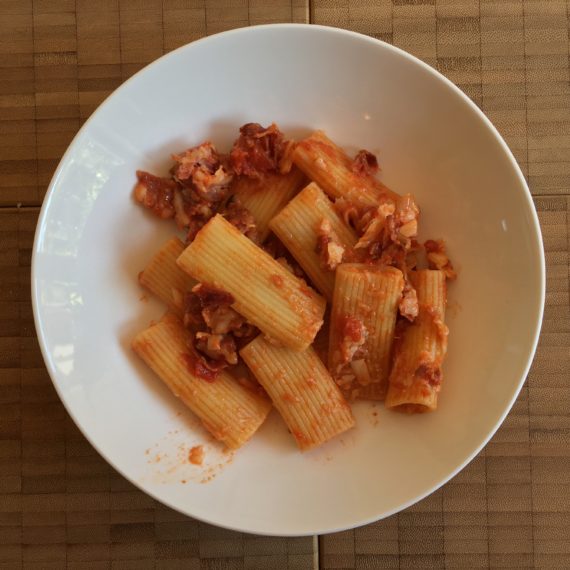 It is a beautiful cookbook w/ lots of photos of Rome & the dishes… You cannot help, but thinking about your next trip to Rome & indulging in Roman cuisine. Eleonora Galasso’s Roman dishes are down-to-earth & substantial – this is no cookbook for anybody who is on the how-to-lose-weight trip. Down-to-earth: sometimes some ingredients appear that are not basic Italian – you should take into account that Eleonora Galasso is a blogger & influencer on international level…

When cooking any recipes always think about the amounts: most recipes are for 6 persons. (I’d assume that normally we all cook for 2 or 4 persons…)

The cookbook gives you a lot of ideas how to cook Roman dishes anywhere & w/ some courage it’ll work out fine!

My credo is: simple & fast!
In the cookbook you’ll often find a from-the-scratch approach (like starting w/ fresh tomatoes, boil them, let them rest, peel them…). Of course you can do so (like another recipe suggests: making your own mascarpone!). It always takes time – time that working people don’t have in abundance!
I think: stick to the dish & simplify the process! 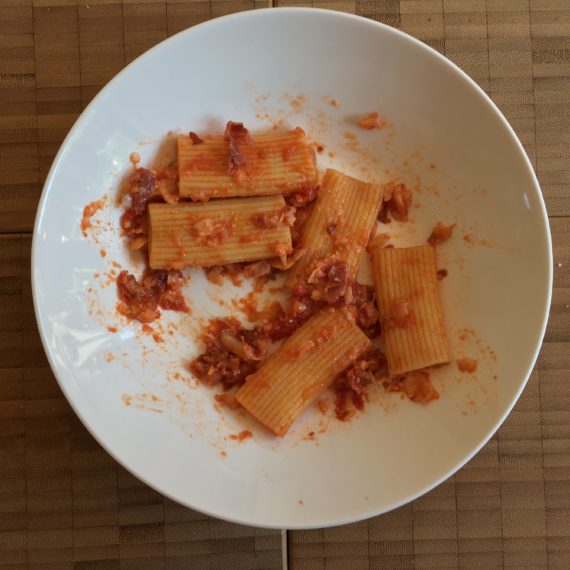 Coming back to our rigatoni all’ amatriciana… There were some leftovers – just reheat it in microwave. Unfortunately the crispy bacon transforms into soft bacon, however, the flavours don’t change! It’s this full, rich mix of tomato, bacon & pecorino that’s around each single piece of rigatoni. 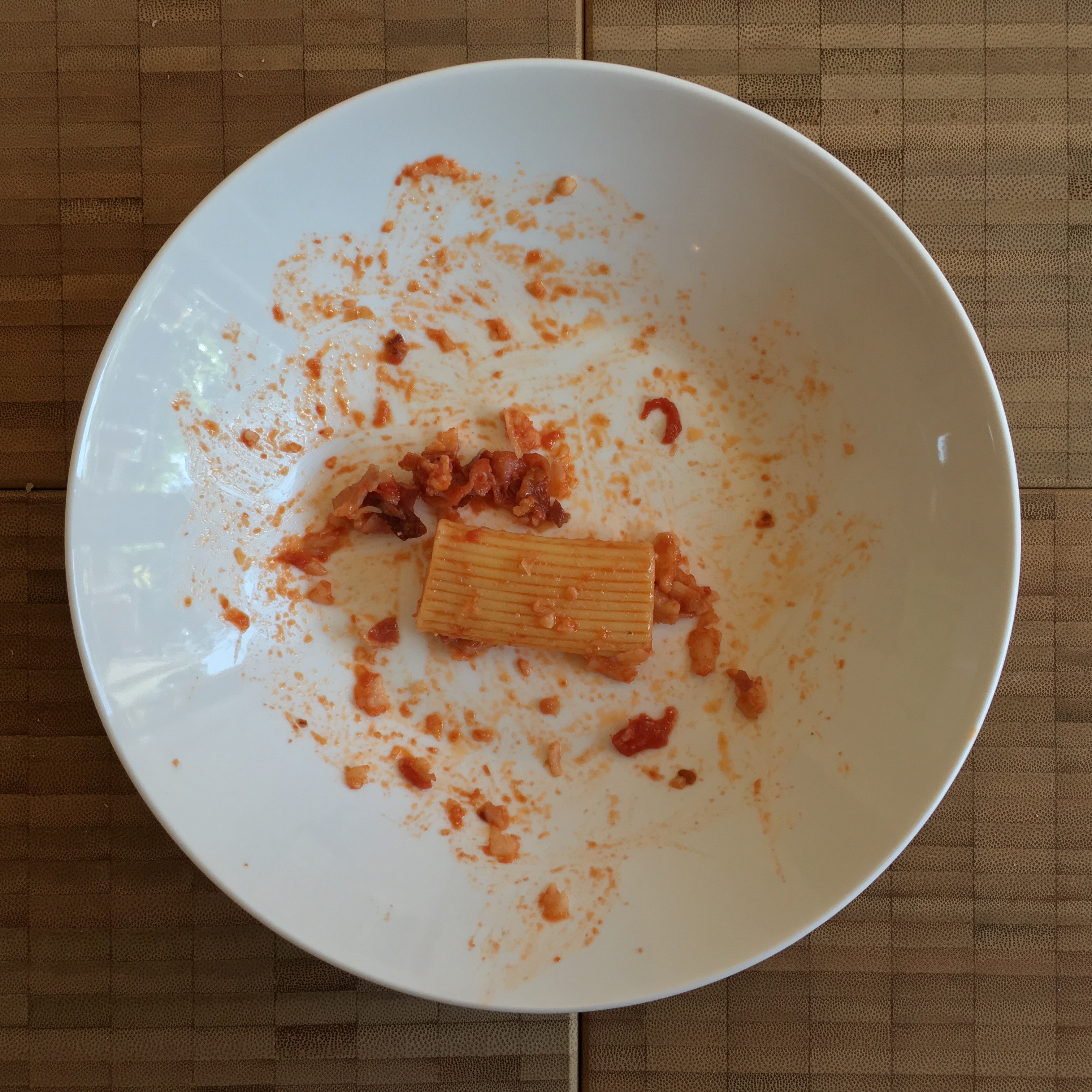