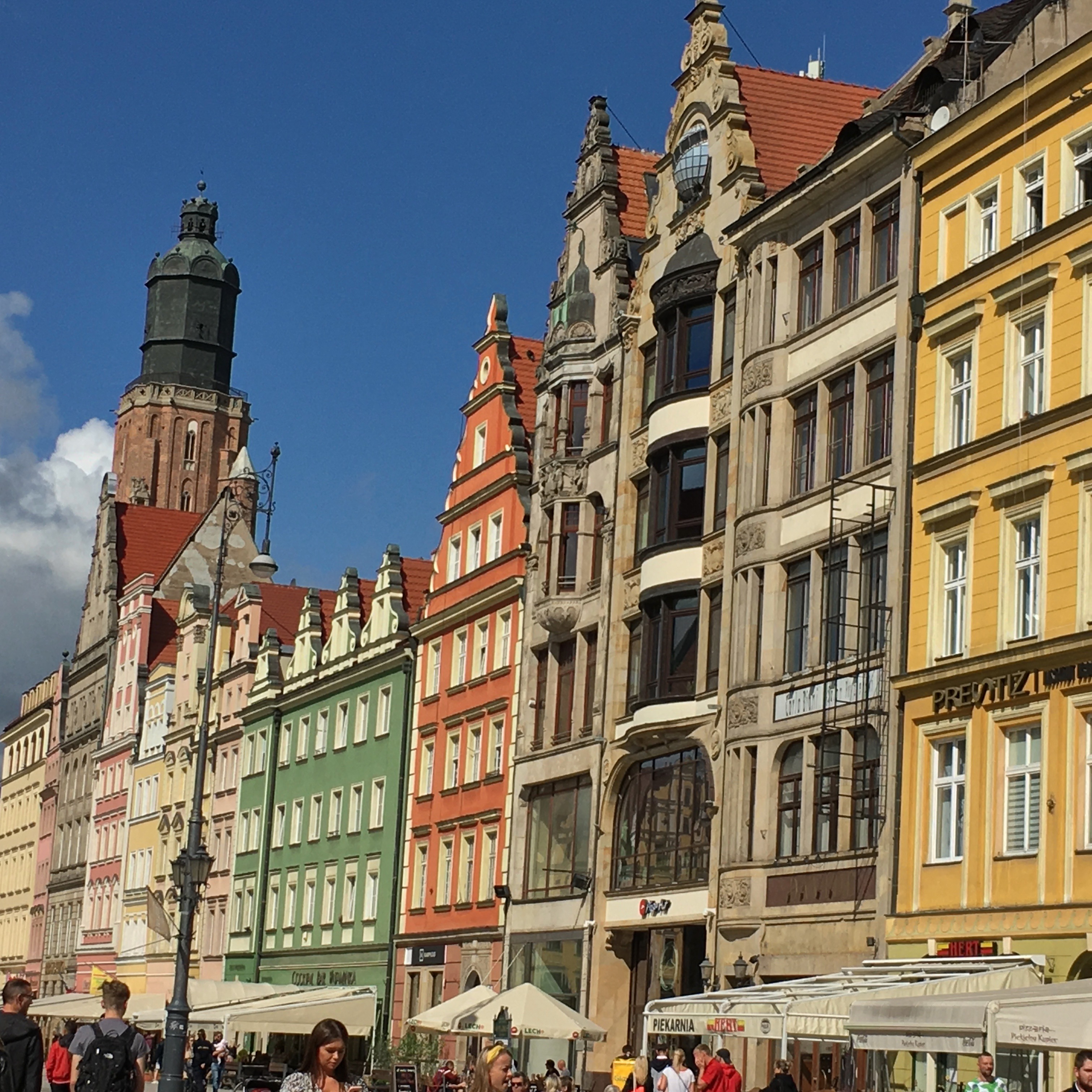 Look: what a blue sky!

When comparing this brilliant weather beginning of September in Wroclaw with the almost always grey sky and the rainy mess outside now, i. e. beginning of October, I only can sigh and long for the next holiday trip.

This post is about Wroclaw, our last stop in Poland.

Let’s start with the market square, one of the largest market squares resp. city centers of all these old cities with long history. The market square has got some blocks of beautiful houses with crisscrossing alleyways and the old townhall in the mid of the space as well as packed rows of also beautiful houses defining the extent of the heart of the Old Town Quarters in Wroclaw.

… and there are lots of cafes, bistros, restaurants, bars … all around the market square inviting anybody to chill out in the fresh air and simply watch the bustling activities.

Be sure we accepted the offer to chill … more than once! 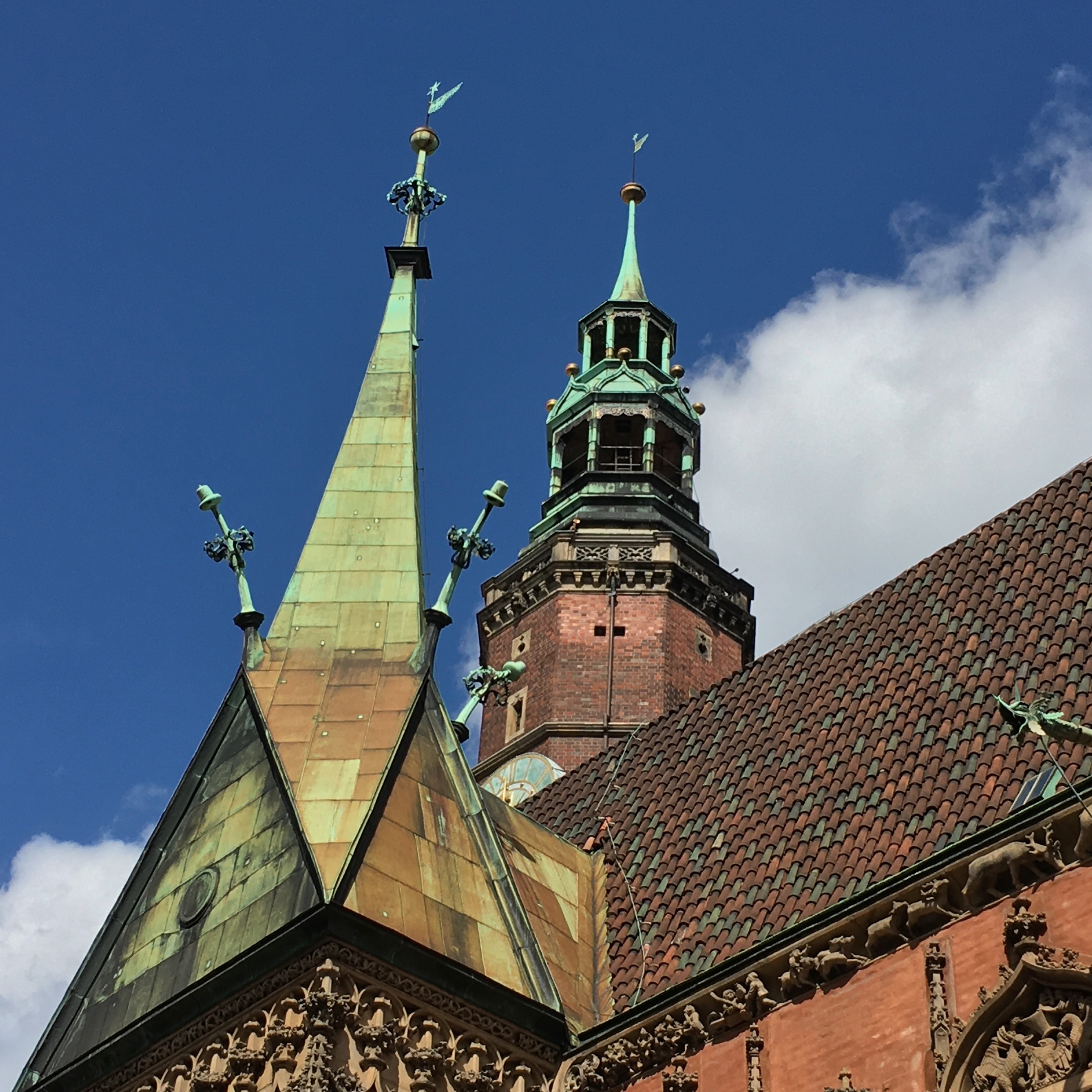 Some details of the town hall and their towering turrets – at the right there is one of the ubiquitous gargoyles formed as a dragon.

… and here is one of the front rows of this immense building with its delicate decoration. It’s a magnificent view from one of the street bars or cafés. 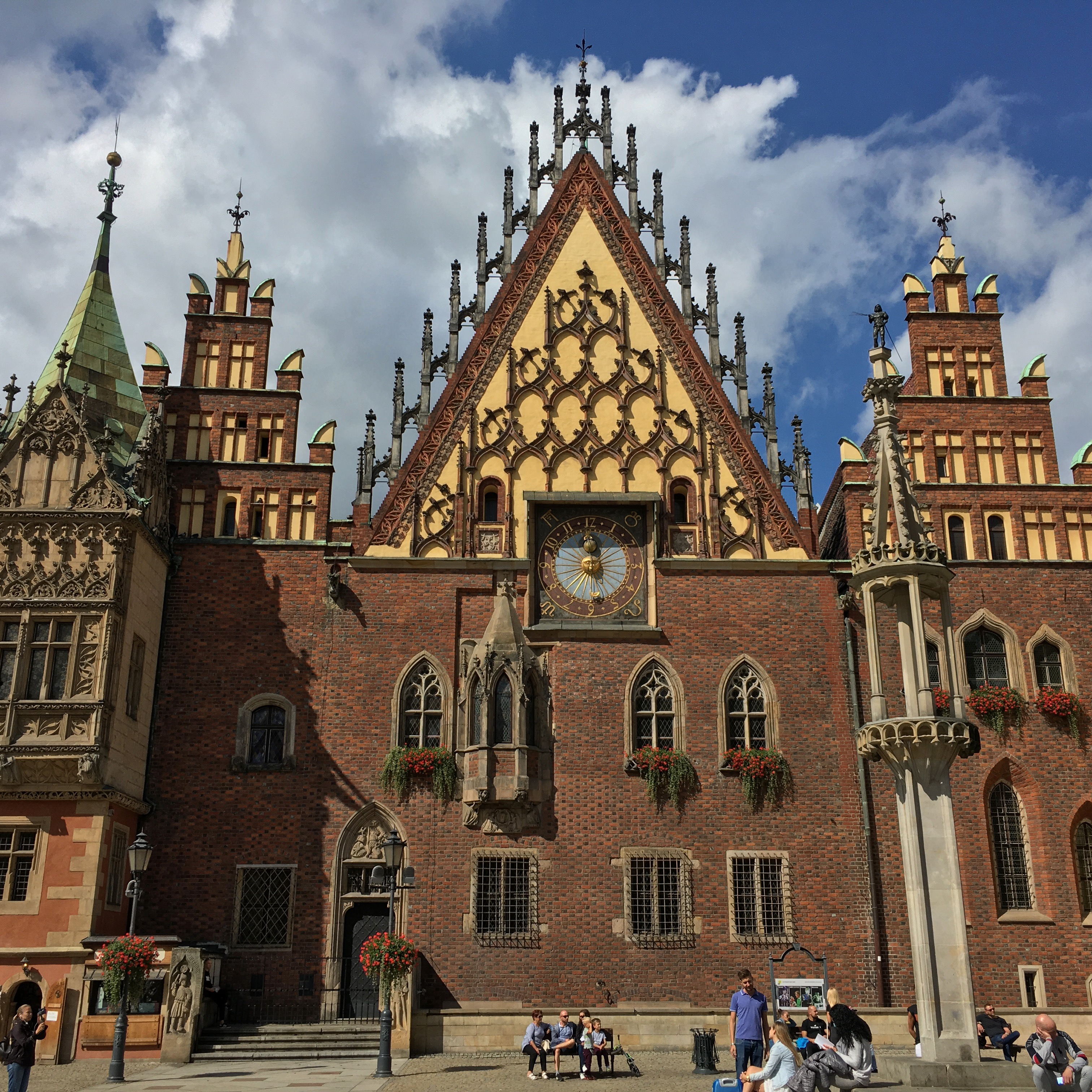 My better half and I got really obsessed with all the fine ornaments all over the build fronts – we took more photos than ever. (Remember that we had already stops in Warsaw and Krakow, both cities with well kept Old Town quarters, marvelous churches … where there are photo shooting moments than you can imagine.) 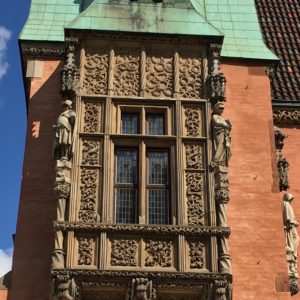 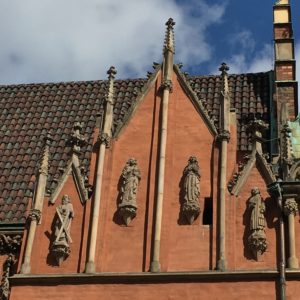 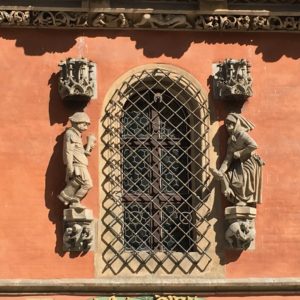 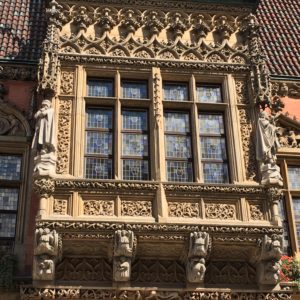 Coming back to the beautiful houses lining the square. In the adjacent streets you’ll find even more – especially around the historic Salt Market Square next to the center. 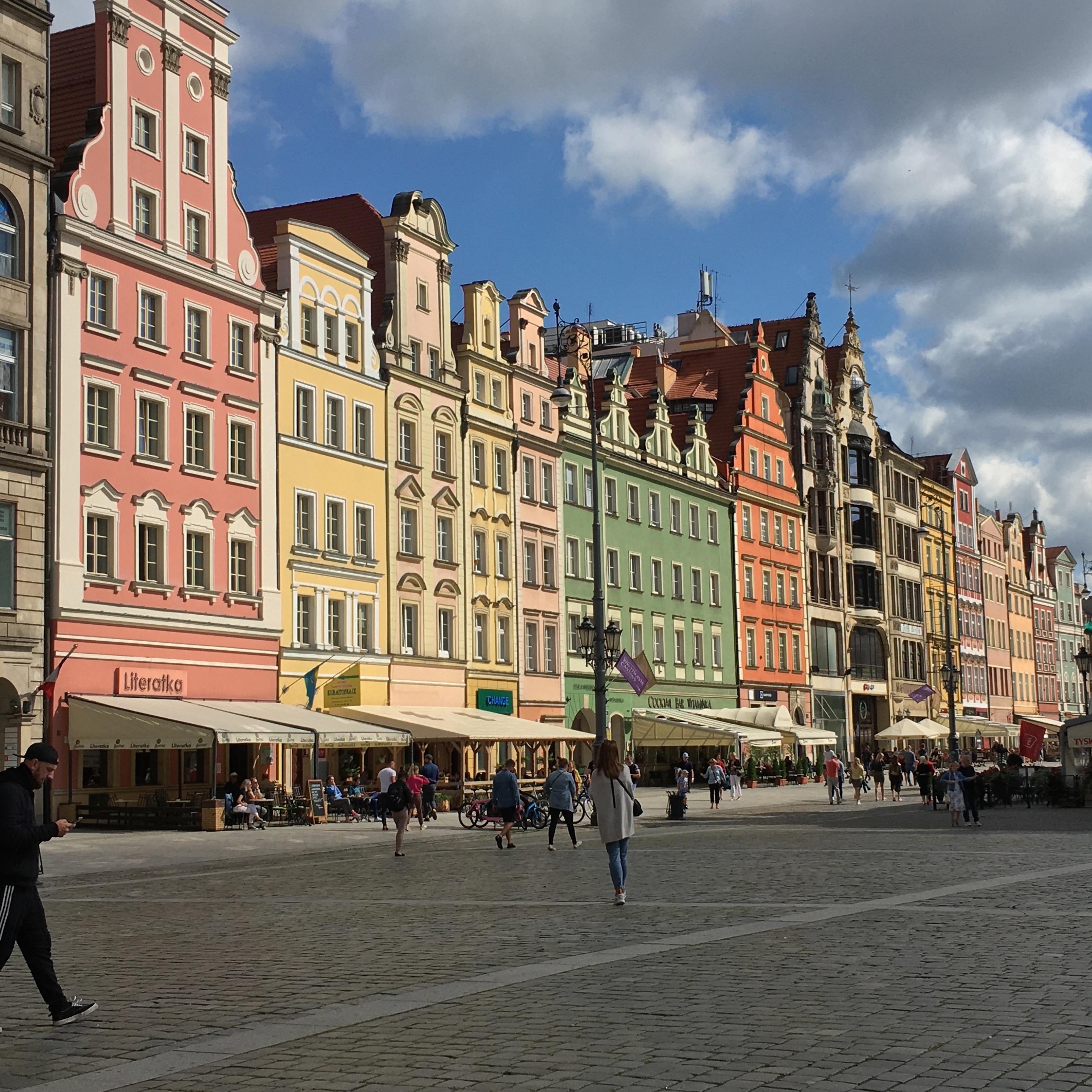 We just enjoyed sitting outside in the sun resp. shade having some beer or coffee. Later in the afternoon we had an early dinner before walking back to our hotel.

… and during the day?
The market square is the perfect starting point for becoming acquainted with Wroclaw – by walking. 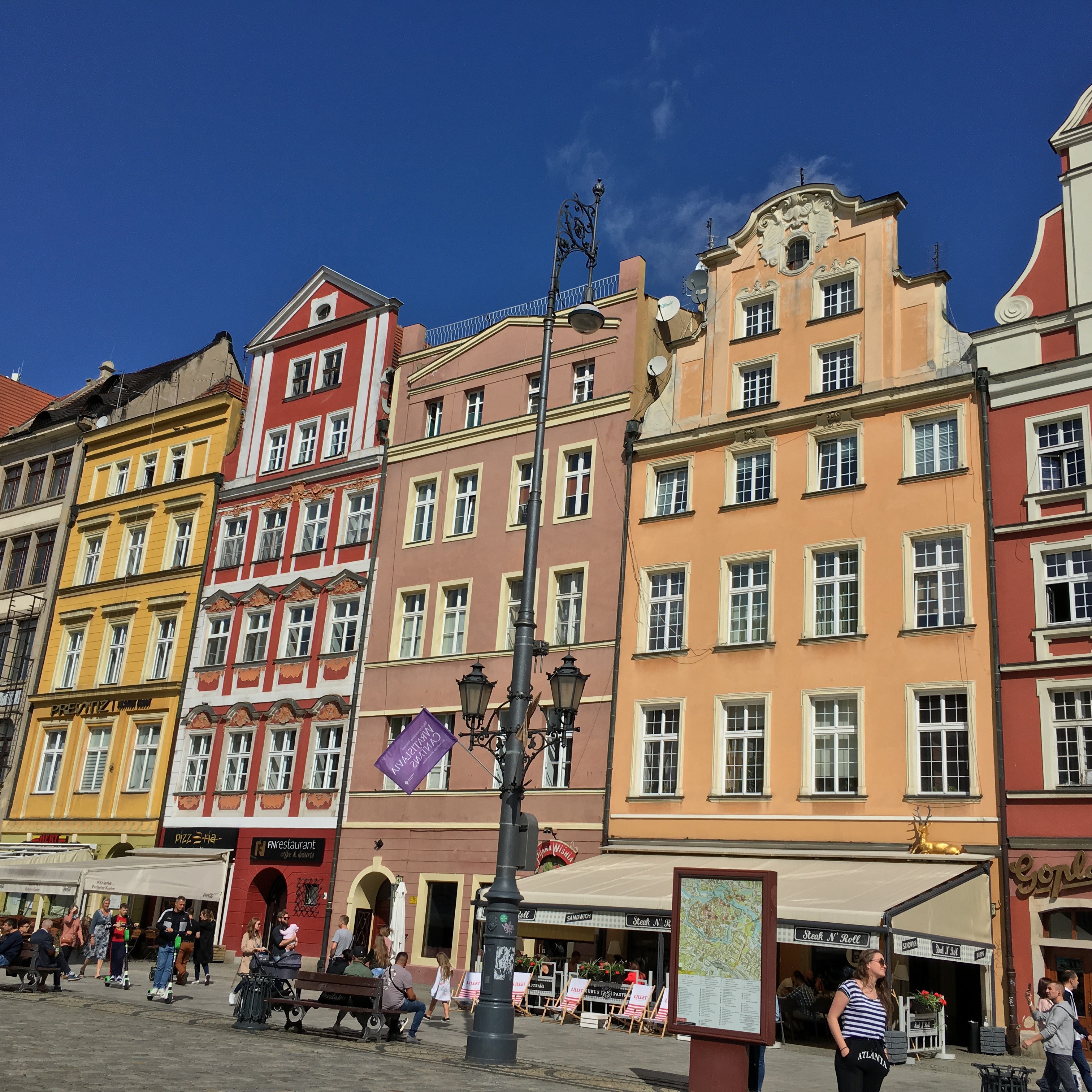 However, some more photos about the elaborate houses … 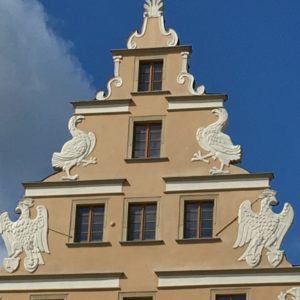 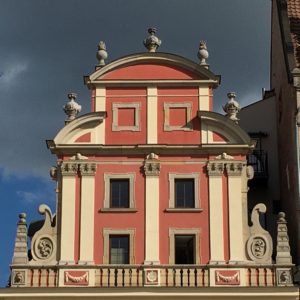 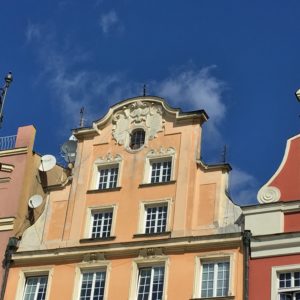 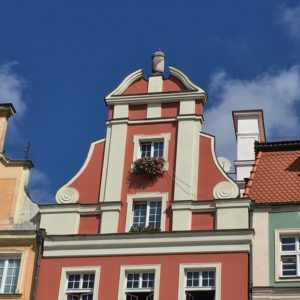 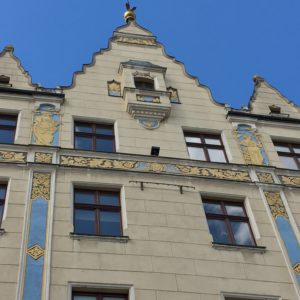 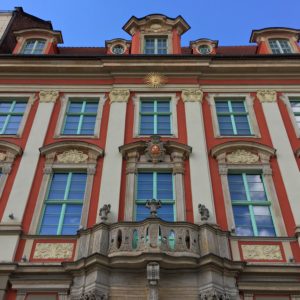 I mentioned the early dinner which became a conformed habit during our trip to Poland.

Polish cuisine?
We tried all typical dishes – at least I think so – and we enjoyed it although it’s another approach than our daily food at home. There are lots of meat, lots of cabbage and lots of potatoes – and there are dumplings. (In general the Polish cuisine reminded me of my mother’s cooking; my parents came from Thuringia which is next to the border. Also I think, especially concerning dumplings, there are similar dishes in all the neighboring countries. I remember especially a trip to Prague some years ago where I made a deep dive into dumpling culture.)

Another delicacy are pierogi, filled pierogi, with sour cream. (Just imagine big tortelloni with a solid crust filled with meat and/or vegetables.)

Let’s say good-bye to the market square with this impression of modern art. 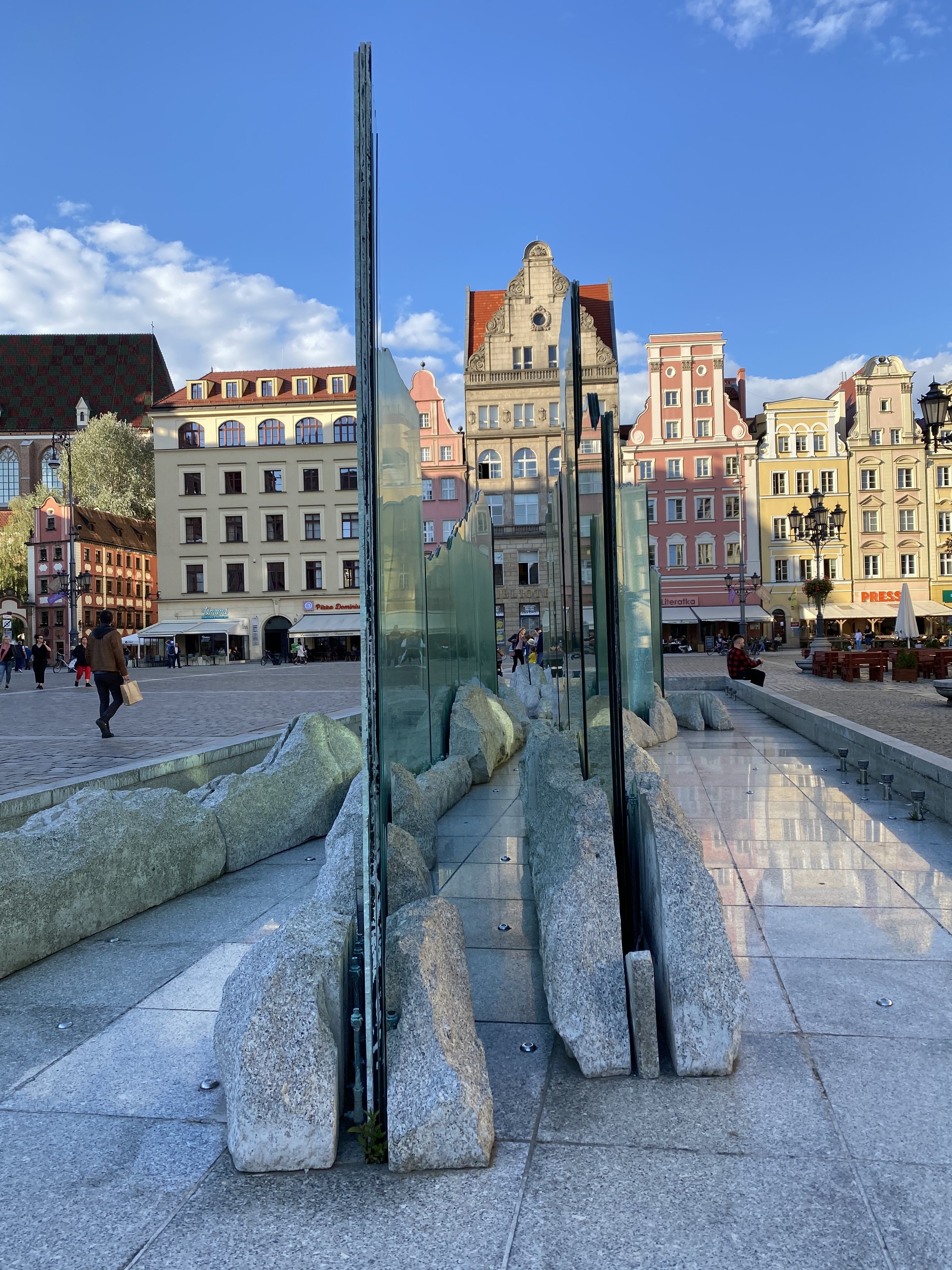 Of course, Wroclaw has got a cathedral.

There is the Oder which provides for islands in Wroclaw (meaning that there are also many bridges). One of the islands is called Cathedral Island with the cathedral to be reached via crossing two historic bridges. (There are, of course, more islands with more churches, cathedrals etc. …) 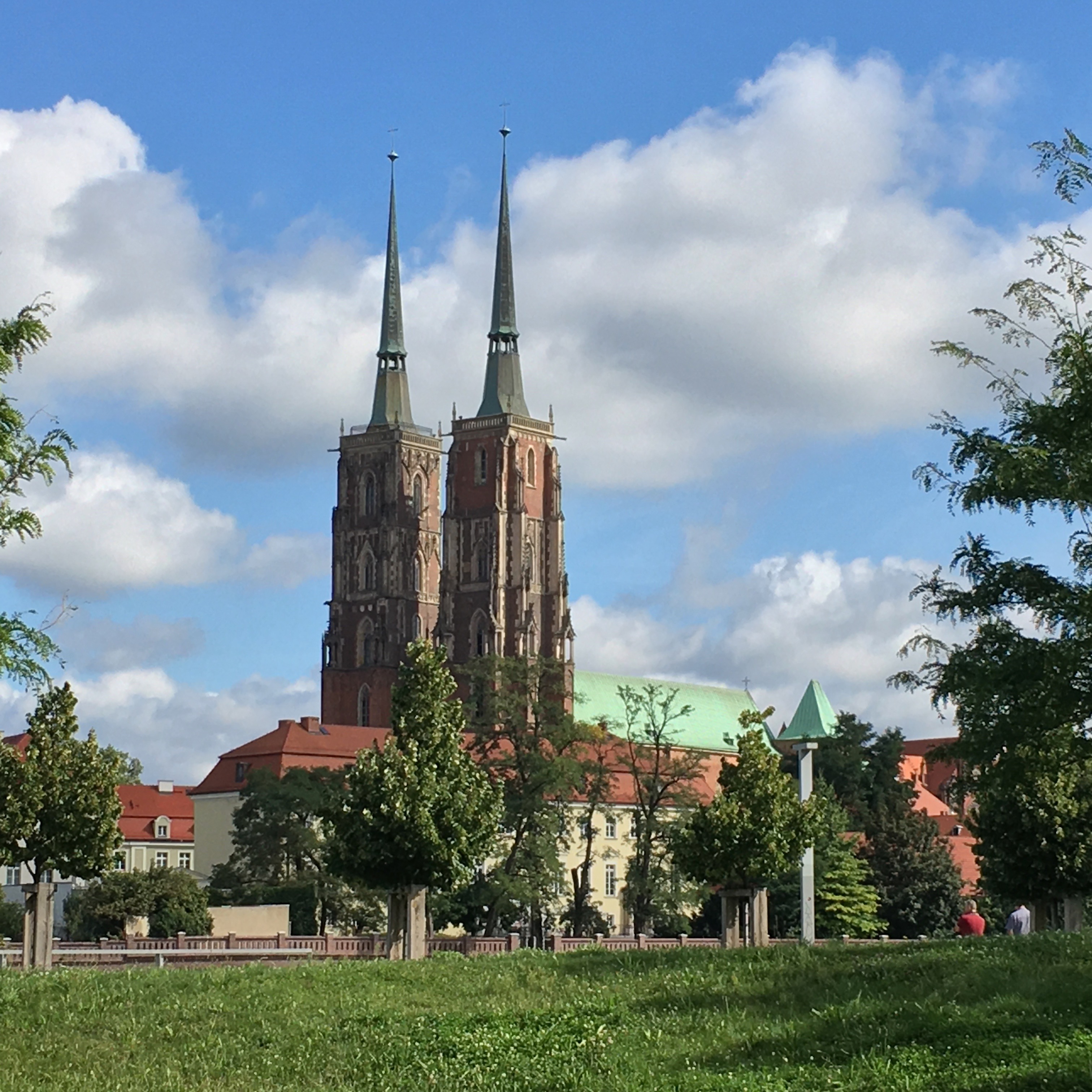 The cathedral is a popular destination during the weekend. There is a lovely walk along the Oder, across historic bridges, along quiet alleyways to the cathedral. 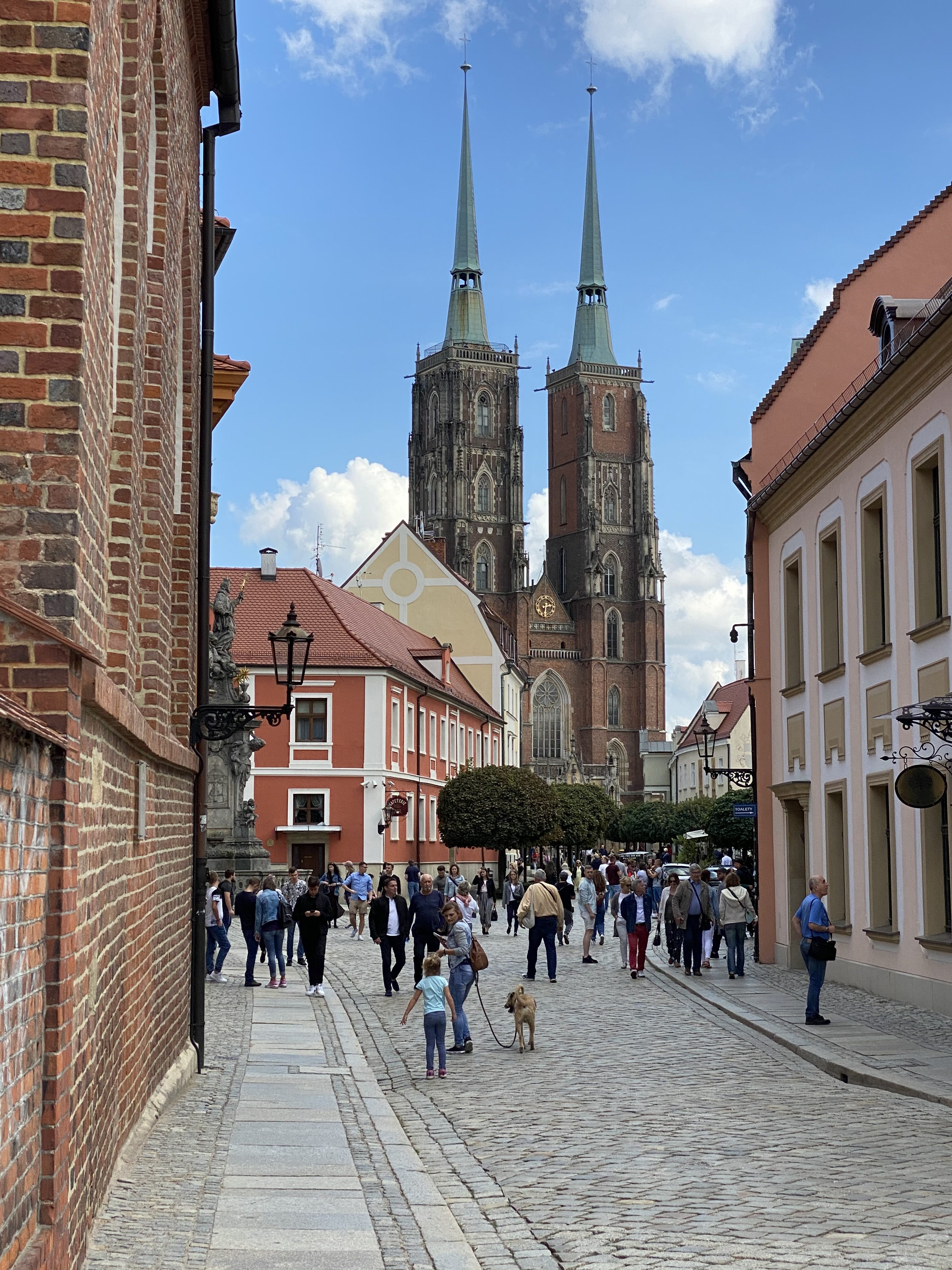 Some details of the front … 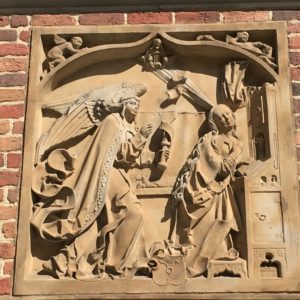 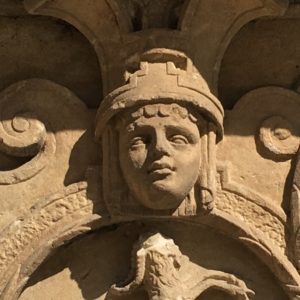 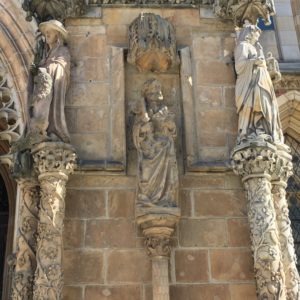 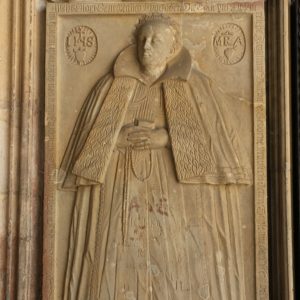 … and once again the inevitable gargoyle … 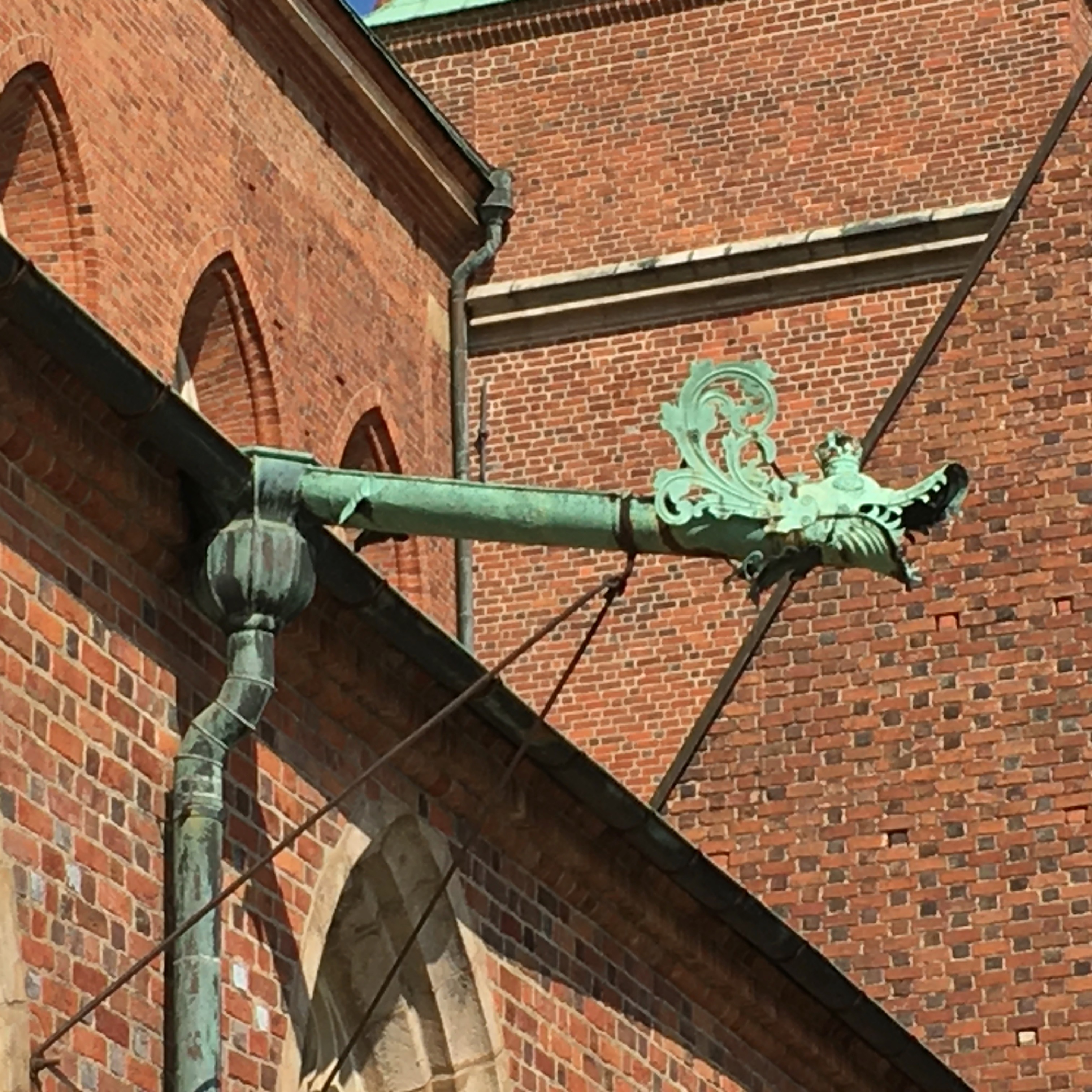 It is possible to go up to the top of one of the church spires.

For the record:
There is a lift after having mastered about 50 steps in a breathtakingly narrow, steep spiral staircase. There are, of course, more churches resp. cathedrals where you may access the spire … However, we confined ourselves to this spire.

There is the Oder and, I think, you get an impression of the island structure. 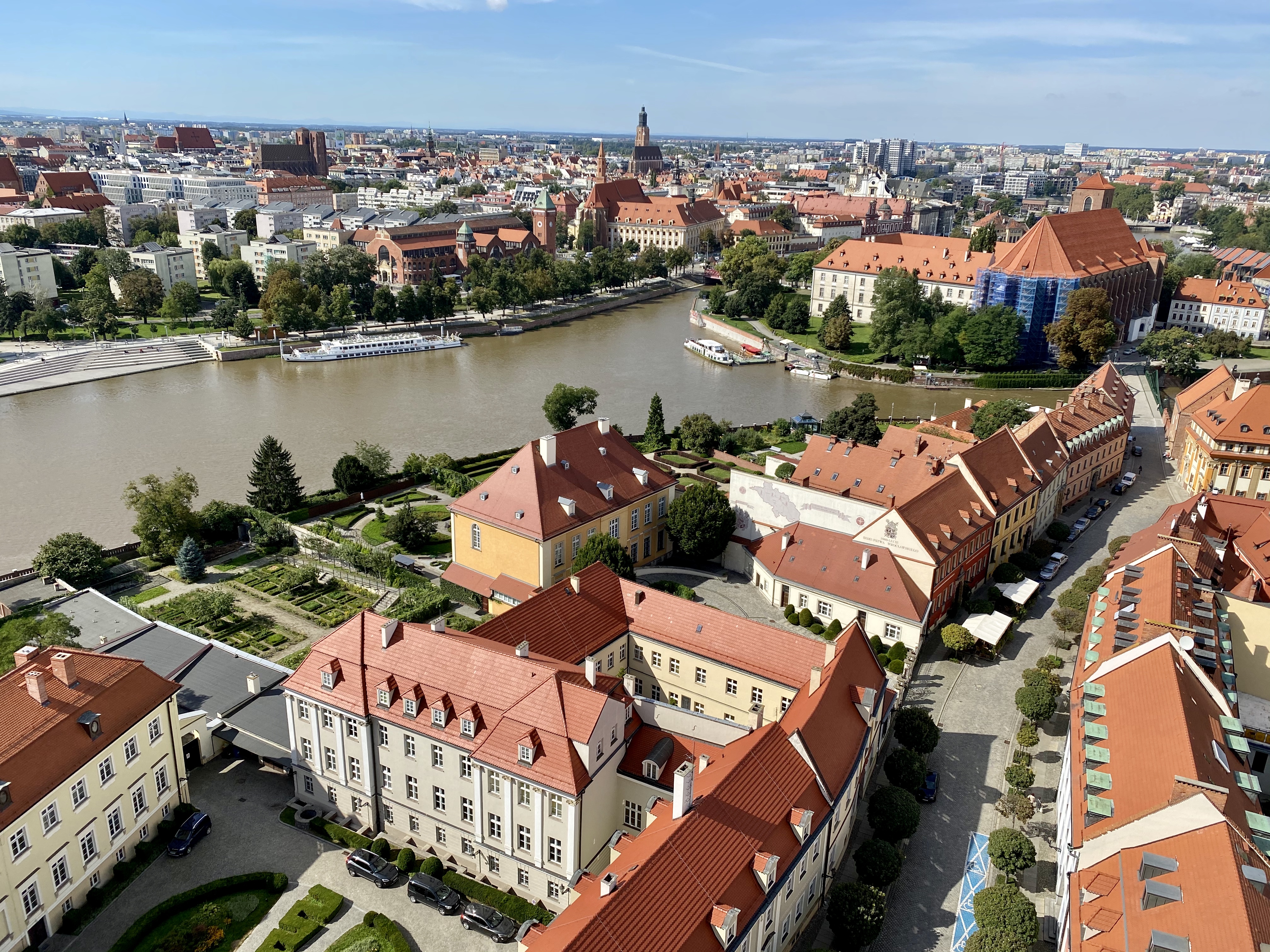 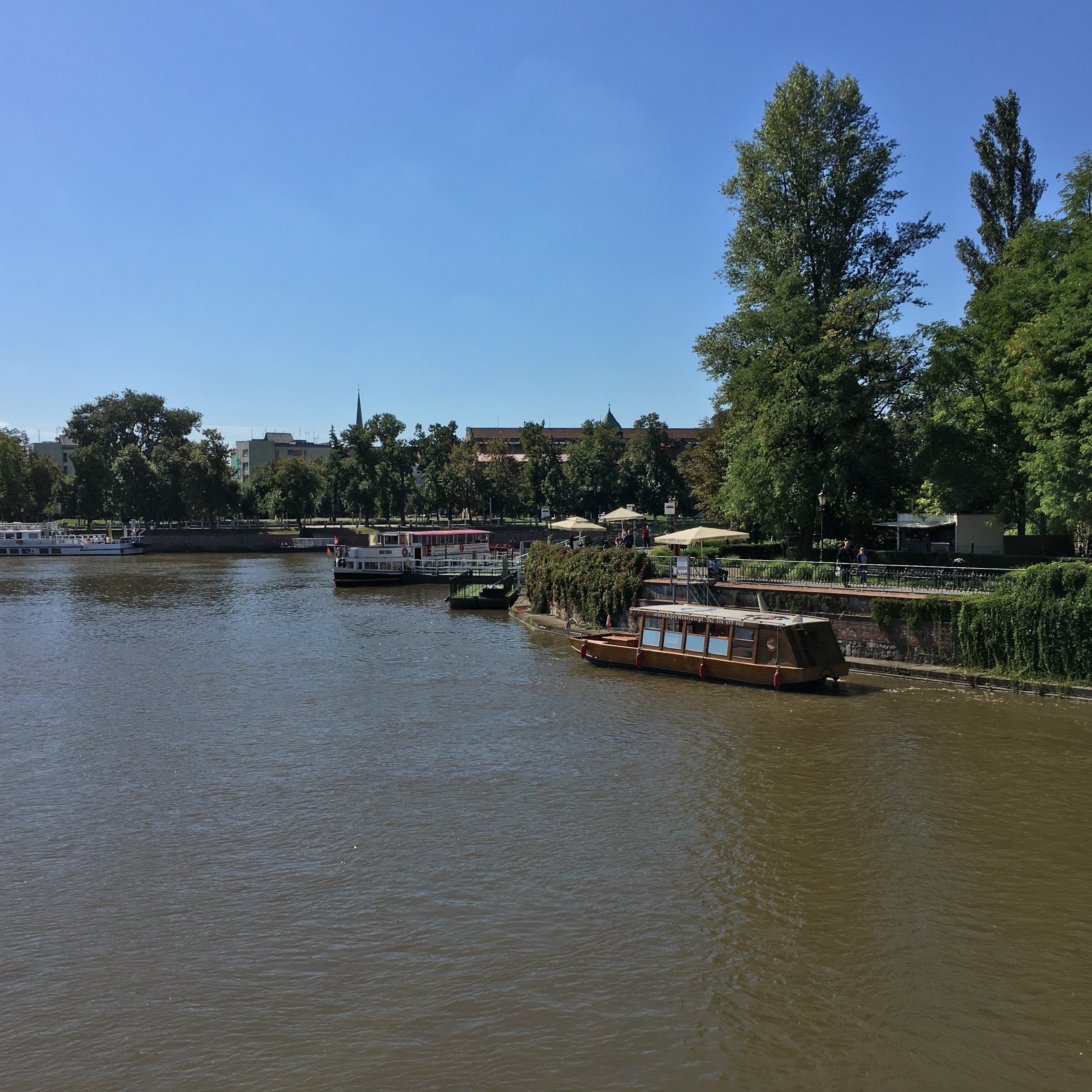 At the university, somewhere between the Old Town Market square and the Oder with the bridges leading to the cathedral modern architecture meets the classic university. 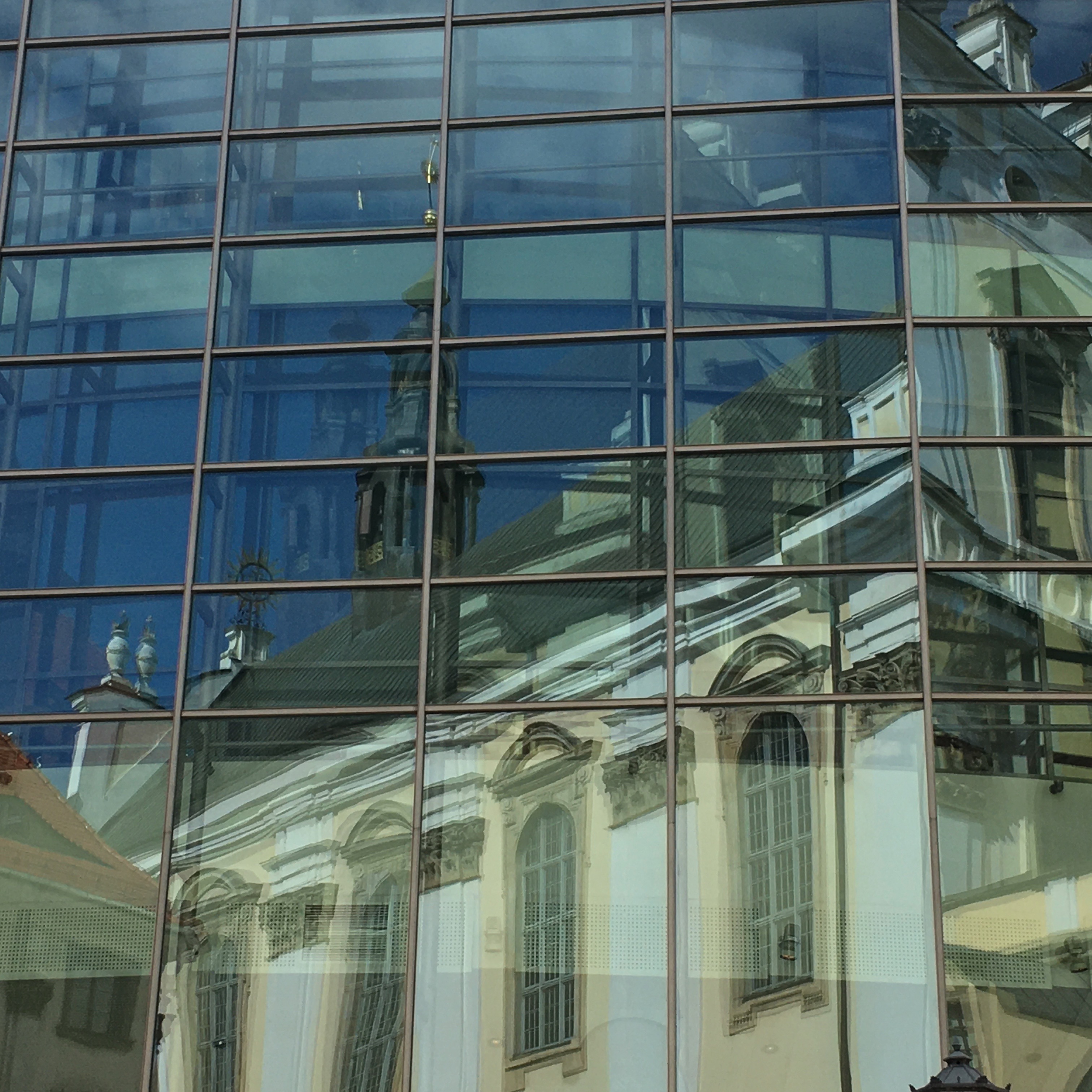 Above it’s the university church reflected in the front of a new building.

Below there is the mathematics tower and the fountain with the naked student reminding the students not to drink and play so excessively that they lose their clothes. 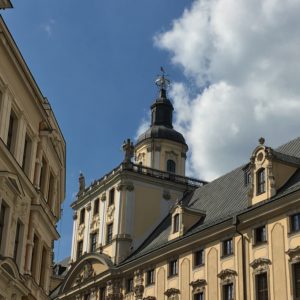 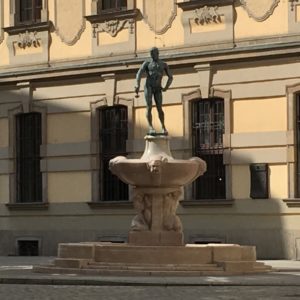 Finally a glimpse of the former royal palace – unfortunately it was closed. 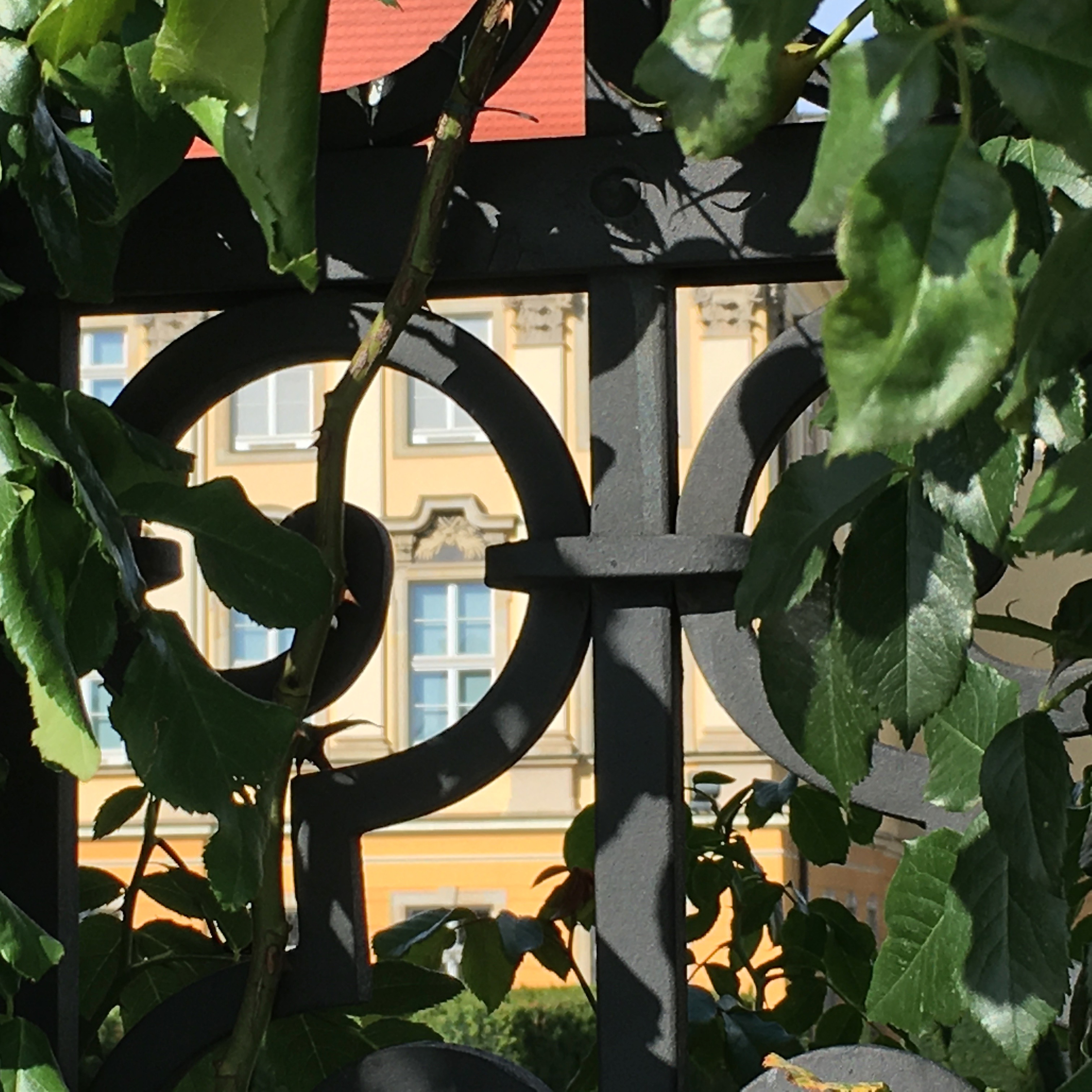 … and the dwarfs – there are about 200 – 300 dwarfs all over Wroclaw. (Their history goes back to the last years of the communist era.) 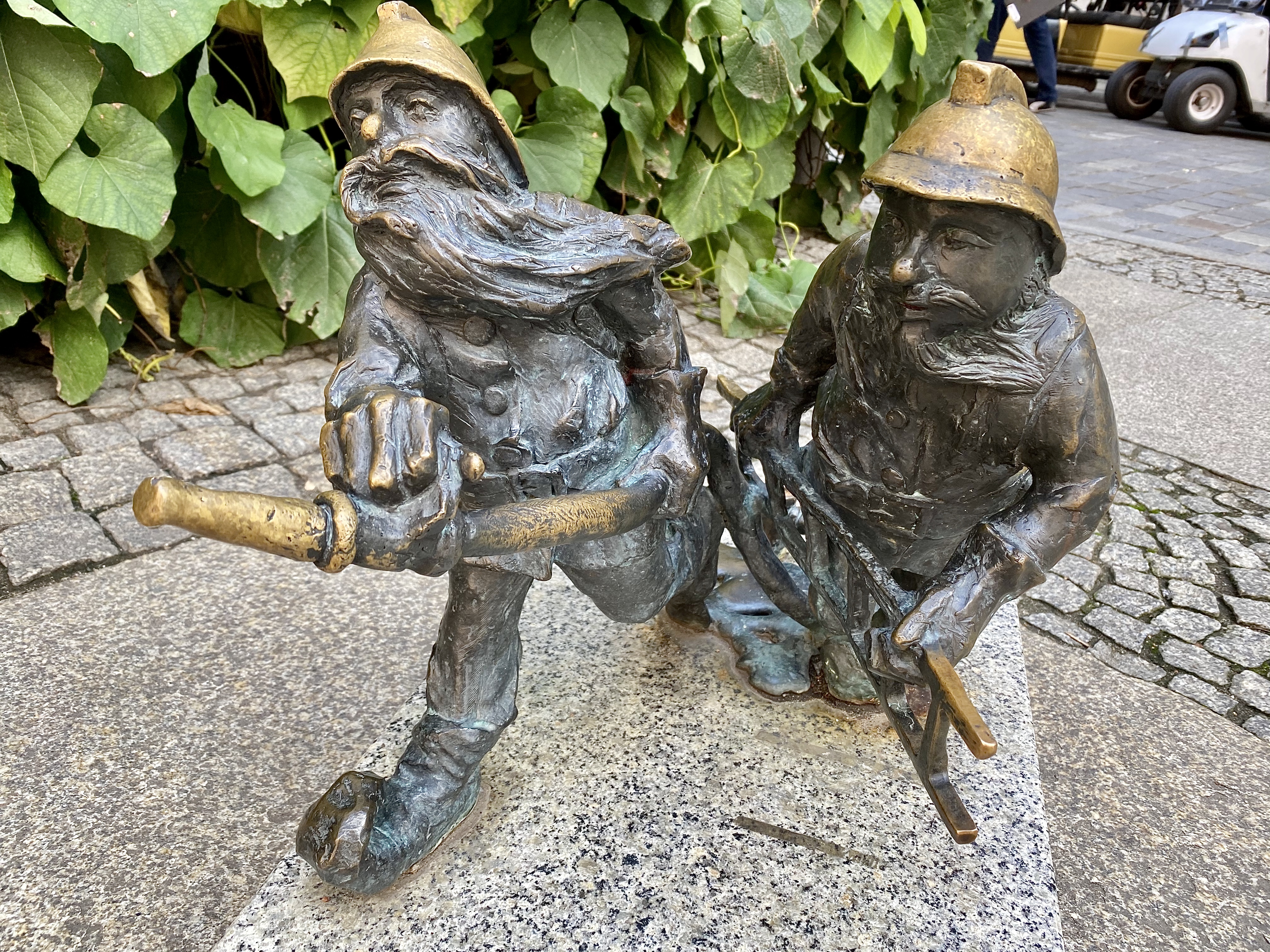 For the record:
Many buildings and churches were destroyed during WWII mostly by the Germans. (This is also true for Warsaw and Krakow …) All was meticulously restored afterwards.

Last, but not least – our reliable travel guides* for our trip to Poland: