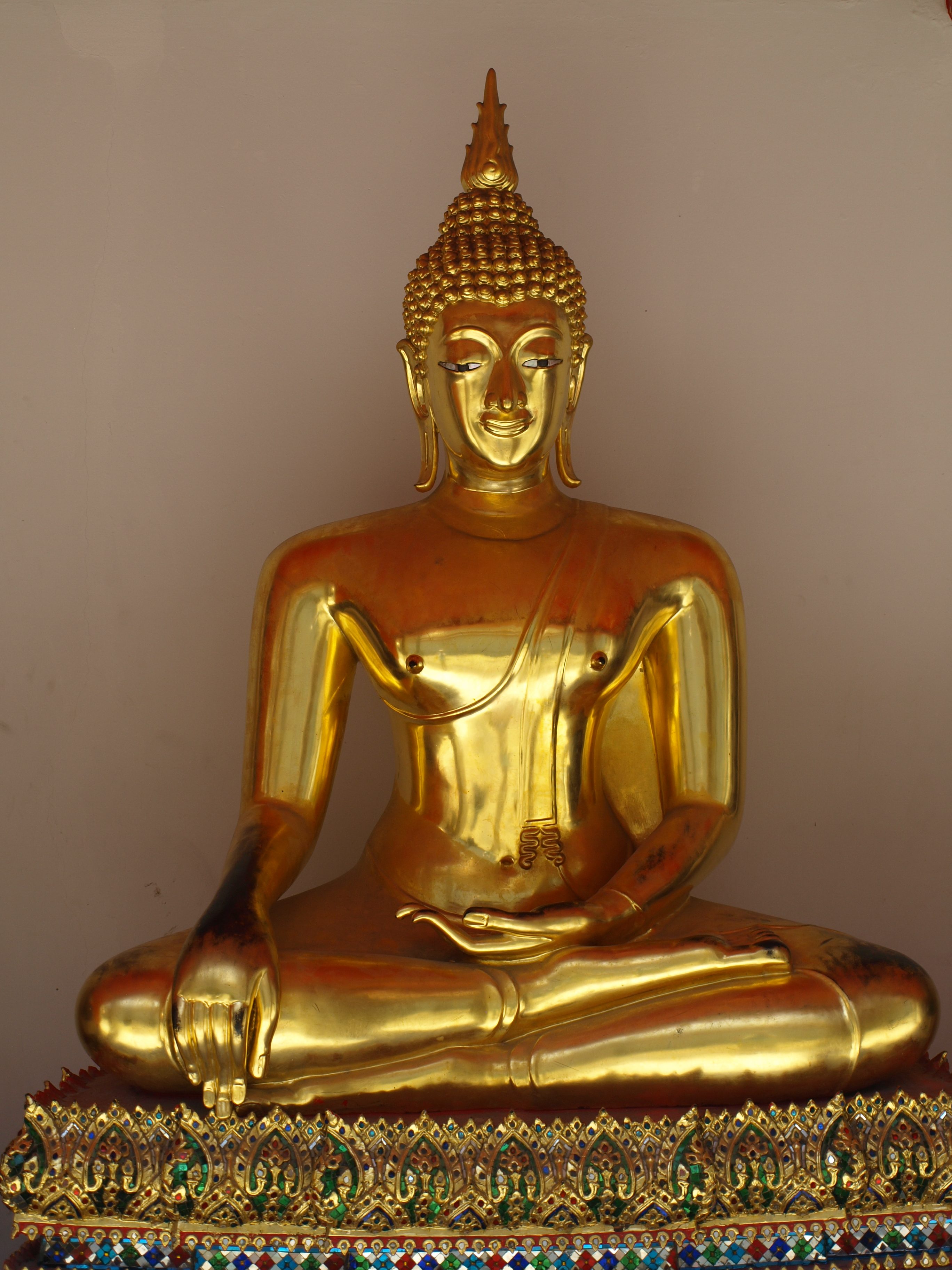 Bangkok – a megalopolis: people, traffic, business, shopping… & lots of temples! Visiting Bangkok on our trip to & from Cambodia left us awestruck concerning the beauty & the splendour of Buddha’s temples.

There are golden Buddhas – everywhere! 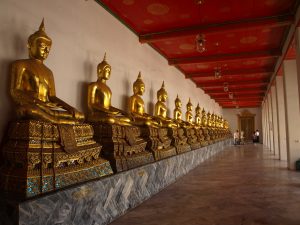 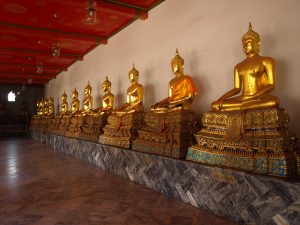 These long rows of Buddha statues reside in Wat Pho lining the walls around a courtyard around a temple.

Altogether we stayed in Bangkok for 4 days – not counting arrival & departure days… We focused on:

All these places are temple compounds meaning that inside the compound  walls there are temples (more than a single temple!), various religious buildings, living quarters for monks & nuns, libraries… If you start investigating make sure to have time – endless time! – because you may get lost between all the elaborated walls & doors & windows & statues & towers… especially when taking photos of all the splendour!

However, for a start let’s concentrate in the golden Buddhas! 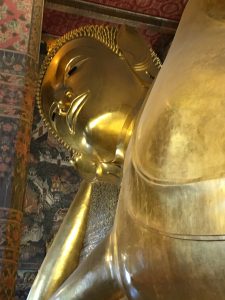 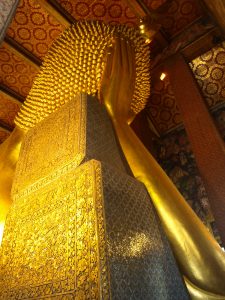 Although the Reclining Buddha is the most famous part of Wat Pho the temple compound is much larger & holds a lot of surprises (e. g. a massage pavilion!).

There are lots of Buddha statues all around Wat Pho & the other temple compounds: some are more elaborate, some require their very own temple – other statues are rather old (the golden cover is peeling…). There are also sleek Buddhas seeming rather modern… 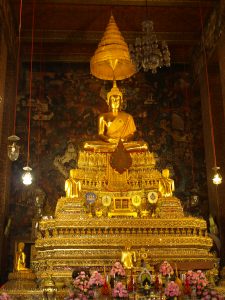 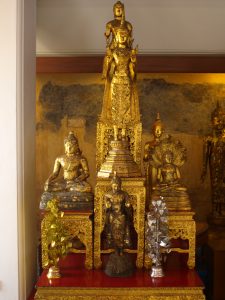 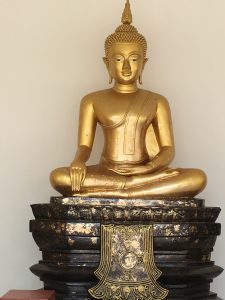 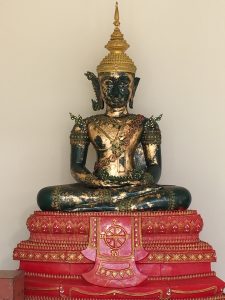 Another famous Buddha statue is the Golden Buddha of Wat Traimit in Bangkok’s Chinatown. This statue is 3 m high, weighs about 5,5 tons & claims to be the world’s biggest golden statue (worth about 250 millions US$ by material…). If you like to admire it you’ll have to manage some flights of stairs… & queue up (of course!)… 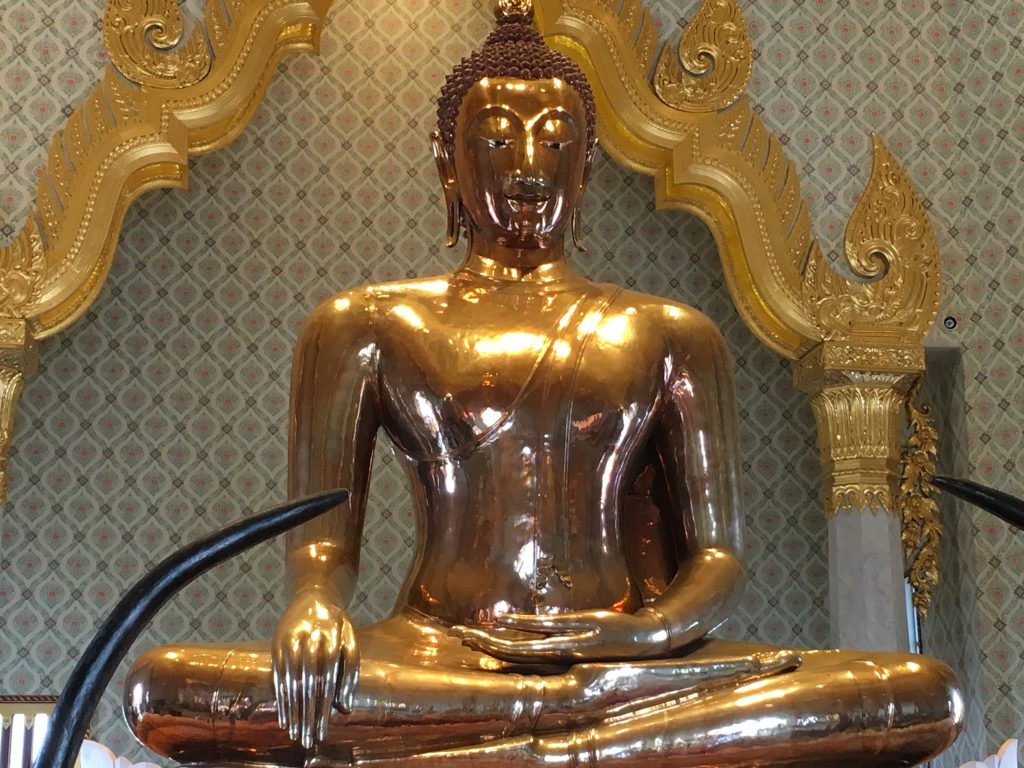 There are Buddhas in Wat Phra Kaew lining temple walls… 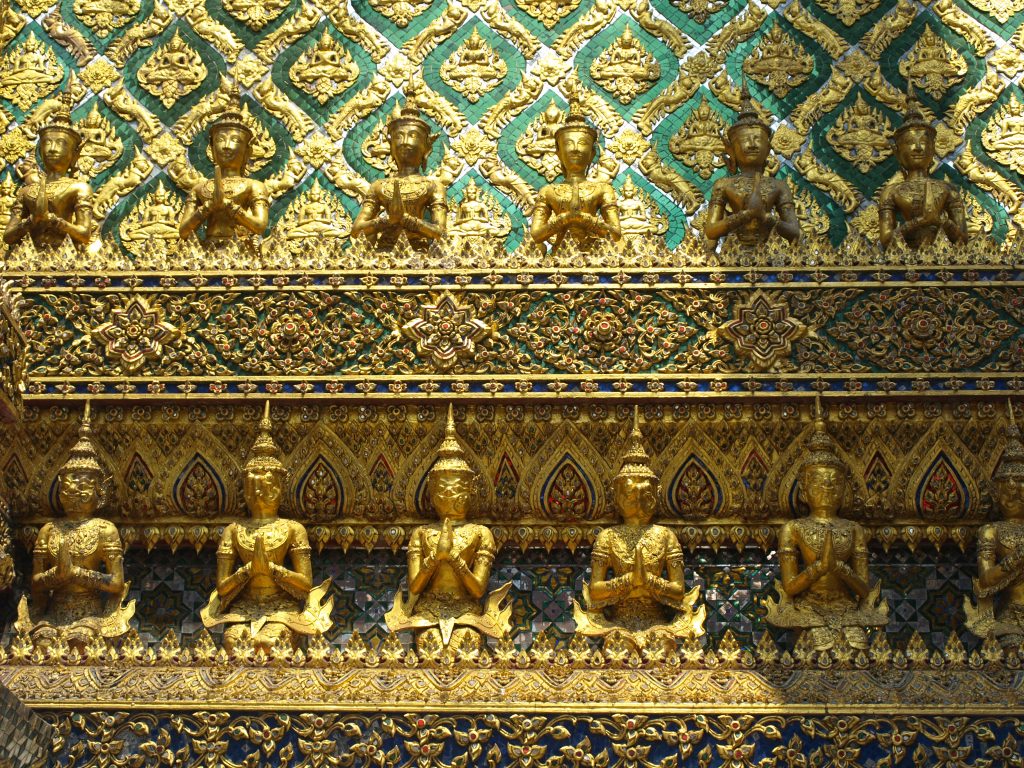 Yes: there are also black Buddhas…

No: we didn’t enter the main temple at Wat Phra Kaew for the Emerald Buddha (Thailand’s most sacred Buddha w/ an interesting history of being covered w/ plaster to stay hidden during the 15th century… transferred due to war from Thailand to Laos later on for about 200 years…) – there were so many people, such a packed crowd that we focused on less filled parts of the compound…

The most sacred temple compound is Wat Phra Kaew next to the former royal palace forming a unique entity (today the King of Thailand has taken residence in another part of Bangkok). Wat Phra Kaew e. g. is about 1.000 m × 750 m by area (including the palace). Wat Pho is somewhat smaller – about 250 m × 250 m by area.

Just have a look at some of the beautiful buildings in the temple compounds: 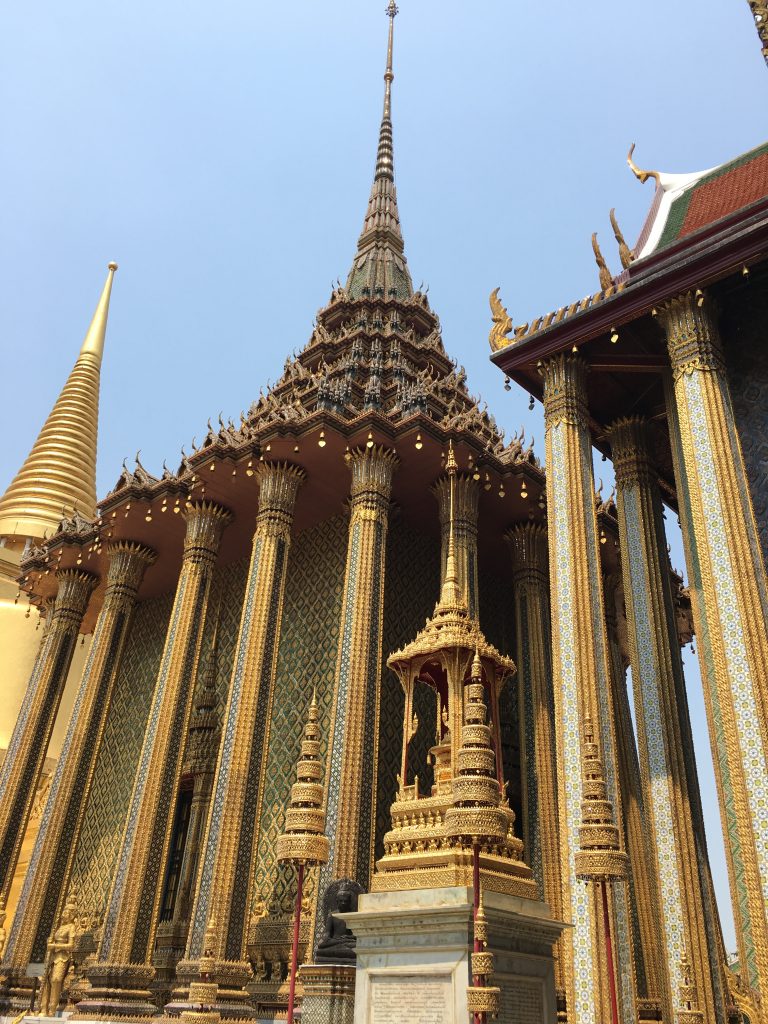 By the way: Wat Phra Kaew holds a miniature replica of the Angkor temple compound in Cambodia. (The replica cannot be placed on a table, of course, it covers about 50 m² (estimated!).)

When visiting a temple compound there are some rules you should follow:

Coming to the guards (mostly having a background in Hindu epics or coming from China) : 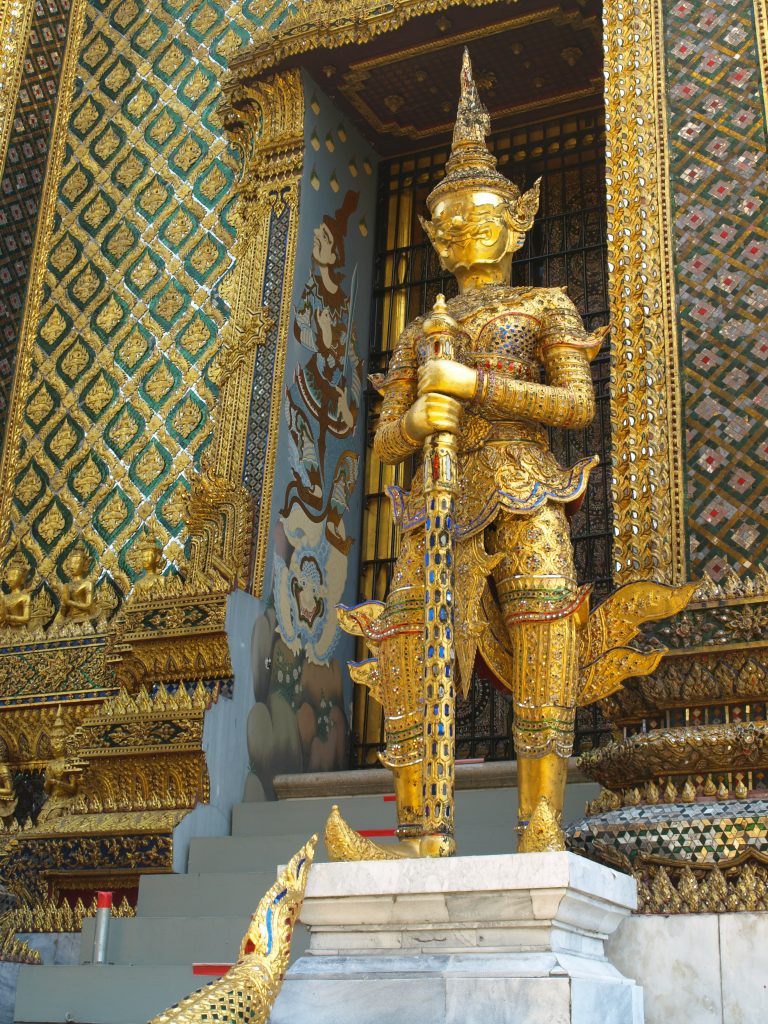 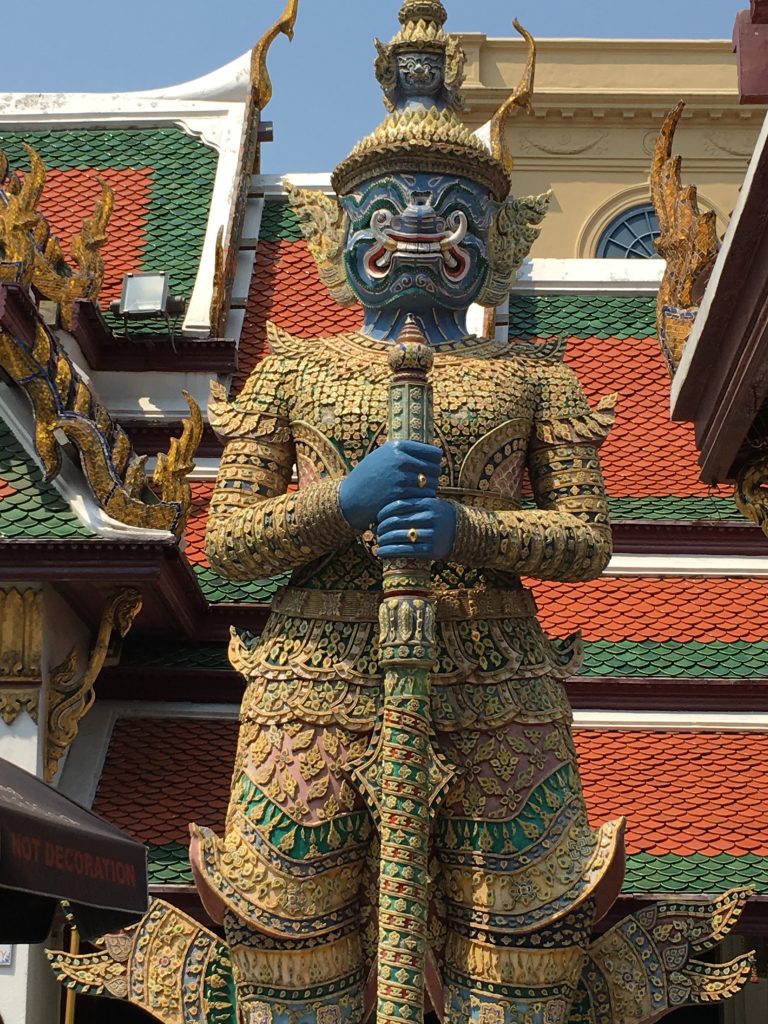 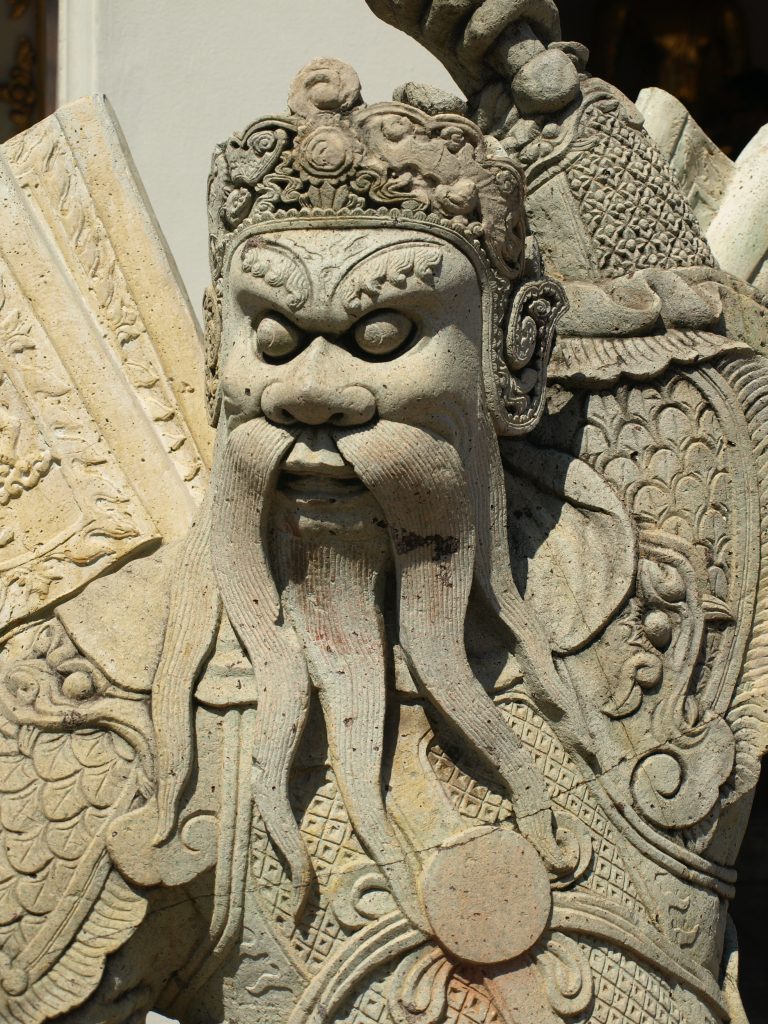 By the way: there is a popular taxi scam (our travel companions enlighten us…)!
When stopping a taxi or just walking towards any temple compound every now & then some taxi drivers seem to be very helpful by announcing that the special temple you want to visit is closed at the moment until late afternoon because of cleaning or ceremonies or whatever. Instead they invite you to go in their taxis to other temples which ends up in a shopping mall… (according to our travel companions). Of course, no temple compound was ever closed…

Concerning taxis & traffic in Bangkok in general:
The most reliable traffic management is provided by the Metro or the Skytrain. In the morning until late morning & in the afternoon from early afternoon to early evening all city highways, roads, streets & alleys are packed w/ cars, busses, lorries, motorcycles, tuk-tuks…it is full! It’s bumper to bumper going at walking pace or less. This applies also for taxis, motor-taxis, tuk-tuks – so no reason to use them!
(OK: taxis are cheap & reliable & fast if you steer clear of the mentioned rush hours!)
Go Metro & Skytrain (or walk)… & then there are waterways: there is a reliable speedboat running up & down the river w/ rather a lot of stops. There are also the Klorng boats covering the canal – just jump on & off…

We lived in Sukhumvit & were happy to get along by using Skytrain, Metro, Speedboat & Klorng boat… It’s always wise to check the public transport possibilities before you start for any tourist highlight.

We enjoyed the metropolis w/ all its people, its traffic, the life… especially the street life w/ its food stalls & the bustling life around! We usually started after breakfast & a swim in the pool for some of Bangkok’s attractions – i. e. a temple compound. After some hours of visiting we returned to the pool to refresh – to restart in the late afternoon for some street viewing, some shopping, some dinner & some cocktails…

Some impressions:
The following photo was not (!) taken at rush hour…

Bangkok is a city of skyscrapers. You get used to this urban landscape when leaving the airport for your hotel. 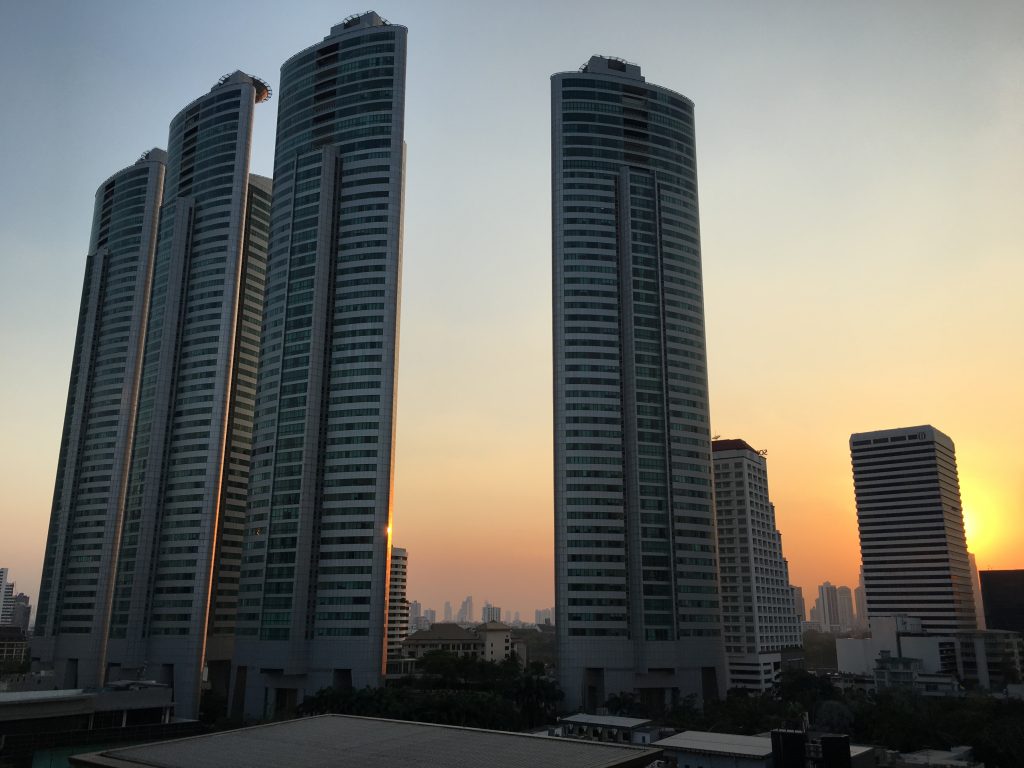 It was my 1st visit to Bangkok (my better half was there once about 25 years ago!). It was a great experience: the city of Bangkok & its modern view, the ancient temple compounds & the golden Buddhas… The temple compounds are sacred areas in the very mid of the city – not really pools of silence & quietness & worship (also practised!)… It’s a vital contrast, but all Thai people seem to be happy with it. 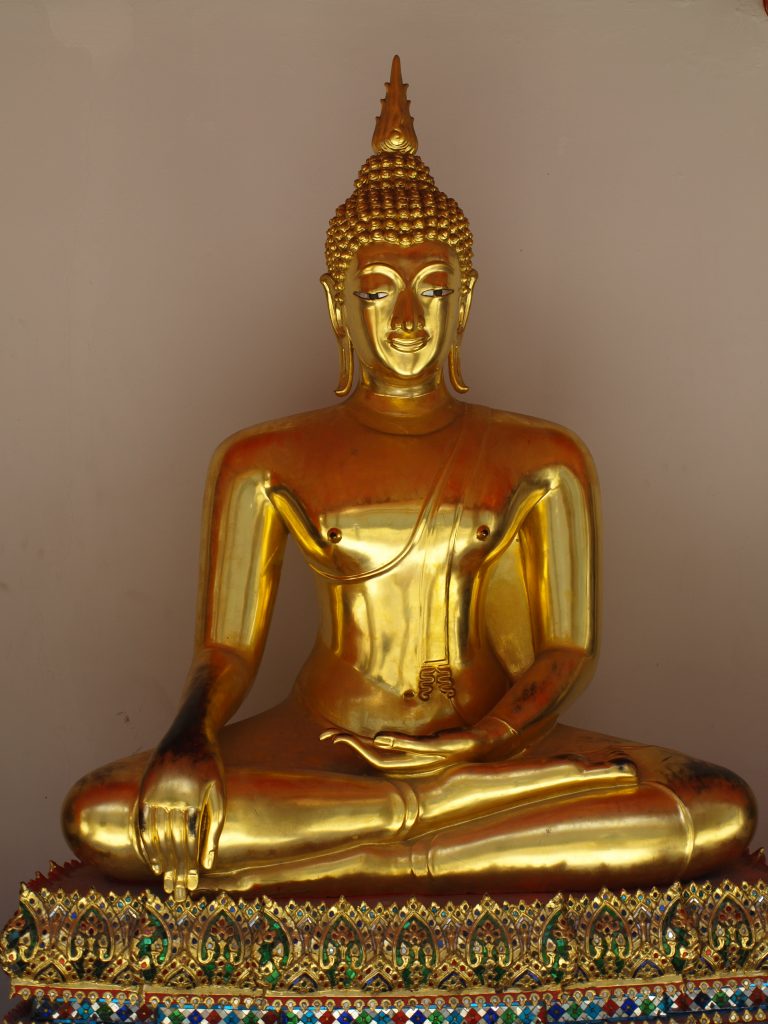 Moving on from Thailand to Cambodia, from Bangkok to Siem Reap… 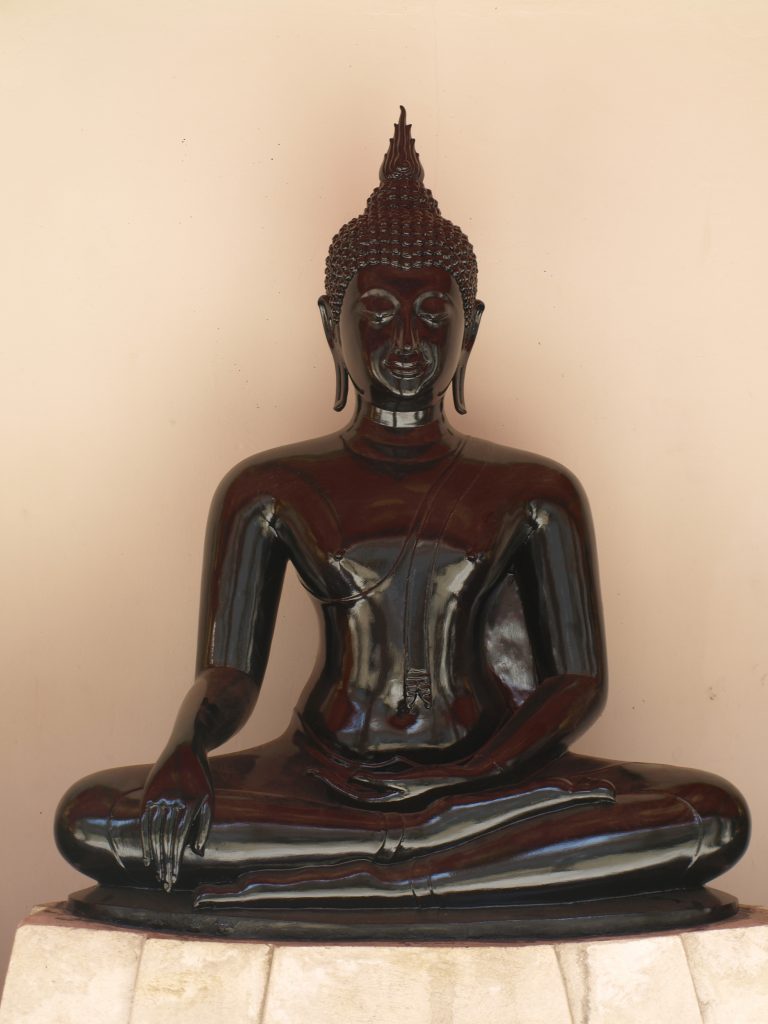 One last word:
We didn’t manage to visit Jim Thompson’s house – the home of the famous entrepreneur filled w/ lots of local art, who vanished into thin air about 50 years ago… what a mystery!
Well: for my next visit…